There is this idea that science fiction as a genre is optimistic, or was optimistic before some particular date.  For example, we often hear Barry Malzberg described as an outlier or rebel because his work is so pessimistic, and hear that the SF "establishment" was upset when Malzberg won the first Campbell award.  So it is fun to discover old stories, stories from before events like the Kennedy assassination or the Vietnam War, which we are sometimes told "signalled the loss of America's innocence" or whatever, which are pessimistic.  Here are three voyages aboard the S. S. Pessimismo with blast off dates in 1949 or 1950, which I read in Isaac Asimov Presents The Golden Years of Science Fiction Sixth Series, published in 1988, an omnibus edition of Isaac Asimov Presents the Great SF Stories, Volumes 11 and 12, which appeared in 1984. 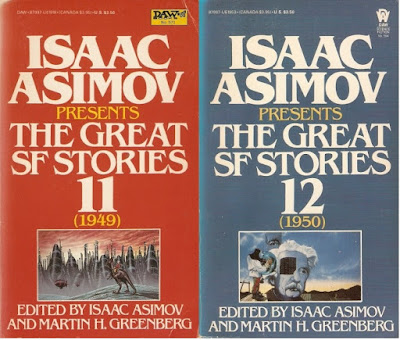 We've experienced some of famous detective novelist MacDonald's pessimistic science fiction before, in the novel Wine of the Dreamers and in some 1948 short stories.  "Flaw" first unleashed its negative vibes in Startling Stories. 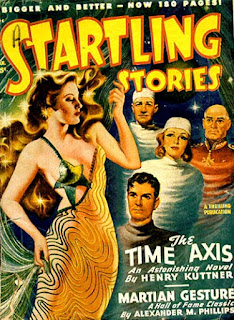 You've probably heard of the phenomenon of "red shift," and how the fact that light from other stars is red shifted is strong evidence that the universe is expanding. (But have you heard the great Peter Hammill's song "Red Shift," in which he uses the fact that the universe is expanding as a kind of metaphor of the expanding psychological distance between people in the modern age?)  In "Flaw" MacDonald suggests an alternate, and quite wacky, theory to explain the red shift phenomenon.

"Flaw" is the brief memoir of Carol Adlar, a woman in the "future" of ten years after MacDonald wrote this story.  An atomic rocket motor has been developed, and Carol, who is a clerk at a space agency rocket station, and her colleagues were initially eager to explore the universe!  Our narrator's fiance Johnny was one of the first handful of astronauts to fly in an atomic rocket ship, but a disaster occurred, killing him and all hope that man can travel beyond the solar system, something our narrator figured out long before the eggheads did!

You see, over a month before Johnny's rocket was expected to return, a colossal meteor crashed near the space base.  Our narrator watched the excavations of the crater with binoculars, and something she saw proved her premonitions of her fiance's death to have been accurate--from the crater was hoisted a jeweled ring, a ring the size of a house!  Carol recognizes the ring as one she gave Johnny!  She realizes that the red shift phenomenon is caused by the fact that our solar system is shrinking, that the rocket ceased shrinking when it got far enough from the Sun!  ""If Johnny had landed safely, I would be able to walk about on the palm of his hand....It is a good thing that he died."

This story is drenched in pessimism.  Carol describes her own physical ("My fingernails are cracked and broken...") and psychological ("I rather imagine I am quite mad") deterioration since Johnny's death and the death of the human race's dreams of visiting the stars, and hopes she will die soon.  She repeatedly refers to how mankind has trashed the Earth, and points out that the ring she gave Johnny was that of her father, who was killed in the Pacific theater during World War II.  "We have made a mess of this planet, and it is something that we cannot leave behind us."

However silly the story's gimmick is, MacDonald is a good writer and there is a measure of human feeling to the tale, so I'd judge it moderately enjoyable.

In the introduction to this story Martin H. Greenberg claims that MacDonald "still has great affection for sf and the people who write and read it."  Somehow I seem to recall MacDonald singing a different tune in the afterword to my edition of Wine of the Dreamers, but since my copy of Wine of the Dreamers is in storage I will just have to take Greenberg's word for it. 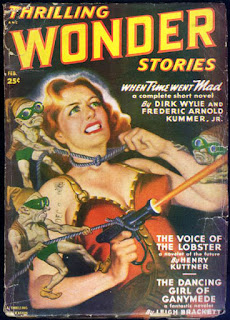 This cautionary tale about advances in entertainment technology first threatened the livelihood of Hollywood TV producers and electronics manufacturers in Thrilling Wonder Stories.

"Spectator Sport" is about a time traveller from 1950 who projects himself 400 years into the future.  He is astonished to find that there has been very little societal progress or change--there are no new buildings, and in fact things look unmaintained, decrepit.  A park bench the scientist recognizes from the 20th century is in place but decayed, as if nobody ever visits the park and the government never services it.

What has happened?  Everybody in the world is so addicted to what we would now call "virtual reality" (MacDonald references Huxley and "the feelies" by name) that few people have sex (population has diminished significantly) or even leave the house unnecessarily, and other forms of entertainment, like books and periodicals, are extinct.

There are two forms of virtual reality, "temps" and "perms."  Temps are like TV sets that have a knob you touch; through the knob is transmitted the emotional content of the show.  Wealthy people opt for more immersive (and expensive) perm treatment--they have their eyes removed and a feeding tube implanted, wires connected to their nerve endings and brain stem, and then live out the rest of their lives in fantasy worlds devised by the 24th century equivalent of TV executives and producers.

With its omniscient narrator, flat characters, and a central gimmick that doesn't feel fresh anymore (though MacDonald did use it five years before it appeared in Kuttner and Moore's "Two-Handed Engine"), I didn't enjoy "Spectator Sport" as much as "Flaw."  I'm more interested in drama and literary virtues than heavy-handed polemics, and "Spectator Sport" seems to rely for its impact on the reader's supposed anti-television prejudice and on its gore scene, in which we observe a person's body being mutilated in preparation for receiving "perm" service.  This story is merely OK.

In his intro Asimov suggests the title of this story may refer not only to T. S. Eliot, but also to the sex act.  Asimov does not worry about spoiling the audience of his anthologies!  This condemnation of our species and civilization first appeared in The Magazine of Fantasy and Science Fiction. 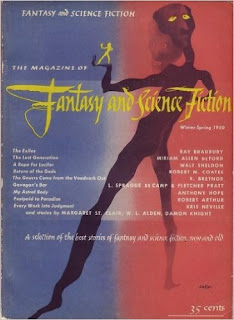 "Not With a Bang" is an exercise in misanthropy.  Nuclear and biological warfare has destroyed civilization.  Only two people survive, one man and one woman. The man is desperate to have sex with the woman, willing to employ any means, but he is too weak to rape her, because he suffers from a wasting disease.  The woman is addle-brained from the shock of something she saw during the brief war, and, as a devoted Christian, refuses to have sex outside of marriage.  The man is so angry at her that he often feels like murdering her, but he needs her to give him life-saving shots when his disease causes him paralysis attacks.

Finally, he convinces the shell-shocked woman to agree to marry him.  He imagines not only the pleasure of having sex with her, but with a daughter they may have(!) Before the wedding he goes to a public restroom, and, as the door closes behind him, he has an attack of paralysis.  He will die of thirst standing there, and with him the human race, a race of murderers and rapists.

Knight is famous for the pun in his 1950 story "To Serve Man," and in the last paragraph of this story he gives us some misanthropic word play, declaring that the word on the door of the lavatory, "MEN," is a warning!

The audacity of the story, the way Knight goes to the limit, makes it fun, regardless of how seriously you might take his attitude.  Moderately enjoyable.

I hope you've enjoyed these trips to classic SF's dark side.  Don't do anything rash!
Posted by MPorcius at 8:01 PM