"What is your planet of origin?"
"Earth."
"A strange name for a world. There is no record of it in our files, but no matter, there are so many worlds." 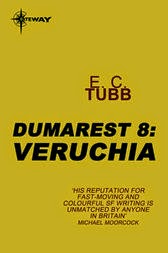 It's time to check in on our old pal Dumarest and see how his galaxy-spanning quest to return to Earth is going!

Veruchia is the eighth of British SF author E.C. Tubb's Dumarest adventures.  It was published in 1973 by Ace, and in the Seventies and Eighties was republished with various interesting covers showcasing the arena, girls' boobs, or both.  I read the electronic version published by Gateway which I purchased from the iTunes store.  Don't let those cracks fool you--75% of the buttons on my iPhone 4 still work and it is equal to the task of reading old SF novels!

(Gateway is doing good work making these books available to us at a low price, but I can't ignore the fact that there is a real issue with the punctuation in this one: lots of quotation marks and periods are simply missing.  Presumably this is some kind of scanning issue.) 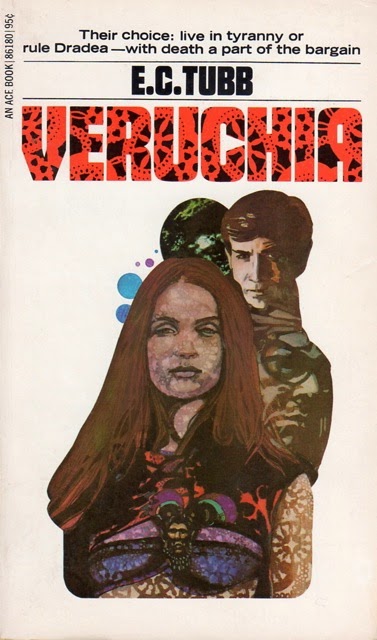 Veruchia is an aristocratic woman on the planet Dradea.  She has a lovely body, but suffers an odd skin condition--her white skin is covered in fine black lines, like an artist's abstract representation of a spider's web.  This repels Dradean men, but Dumarest, who has been to countless planets and seen innumerable strange mutations, is not put off by these marks.  Dumarest comes to Veruchia's attention when he defeats a giant predatory bird in the arena, and one of Veruchia's friends plays matchmaker and hooks her up with our favorite galaxy-trotting gladiator.

Dradea is a society in a state of transition.  Its ruler, believing the Dradean people have fallen into decadence, has been promoting blood sports in the arena as a means of revitalizing society.  (You, Veruchia, Dumarest, and I all agree this doesn't make a lot of sense.)  When this ruler dies with no direct heir a legalistic succession struggle ensues between Veruchia and Montarg, a guy who thinks the blood sports are a great idea.  Montarg is totally ruthless, and he has one of the bald-headed and scarlet-robed members of the Cyclan, that interstellar cabal of manipulative human computers, at his elbow. 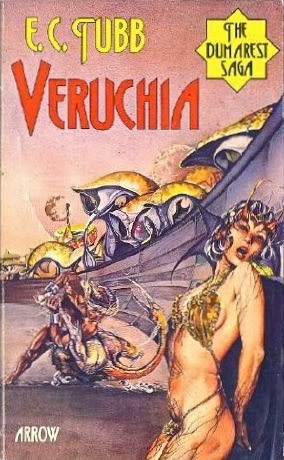 Veruchia thinks her claim to the throne can be validated if she can find the centuries-old remains of the first spaceship to ever land on Dradea (both she and Montarg claim descent from a member of its crew, but there is a dispute over which of the first settlers' lines takes precedence.)  Dumarest has his own reasons for hoping to find the ship: it may be old enough that its charts include a reference to now-forgotten Earth.

Veruchia and Dumarest hire a large team of scientists, technicians, sailors and divers, and find the legendary starship sunken in coastal ocean waters.  In a scene which took me by surprise, Dumarest employs medical technology stolen from the Cyclan to achieve a telepathic link with a decapod, a marine beast that resembles a 600-foot-long octopus!  This Kraken-like creature, under Dumarest's control, brings the ship to the surface, and, sure enough, its log proves that Veruchia, not Montarg, is the legitimate heir to the throne of Dradea.  After this climax we get a denouement in which Montarg and the Cyclan launch a coup which Dumarest foils. 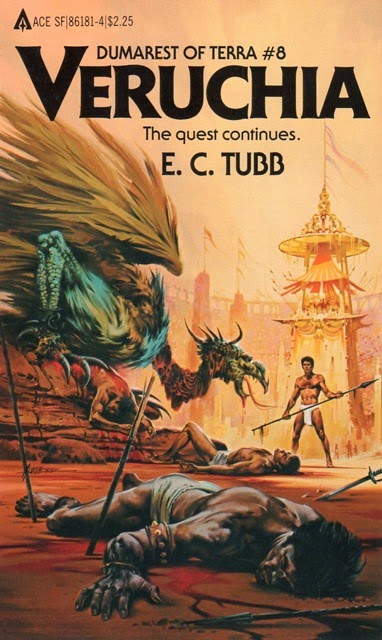 I've enjoyed all the Dumarest books I have read, and I liked this one, too.  Veruchia is obviously open to the criticism that Tubb has yet again put Dumarest in the gladiatorial arena, yet again furnished him with a strange but gorgeous girlfriend, and yet again has him saving the bacon of the less reprehensible faction in a struggle for control of a planet.  However, I liked all the stuff underwater and the arena scene was well done.  This volume also is a good example of the grim and cynical tone of the Dumarest books, and perhaps Tubb's own dim view of human nature.  Even though Tubb encourages you to think the arena bloodsports are an atrocity, he makes it clear that the thirty thousand spectators, even the fundamentally decent Veruchia, are captivated by the violence.  Veruchia and Dumarest risk not only their own lives in the quest for the ancient space ship, but those of others, and several of their hirelings die in horrible ways.  Perhaps most remarkably, the decapod is torn to pieces by giant eels while Dumarest inhabits its mind, and so Dumarest experiences a painful death at firsthand.

Another thing I like about the Dumarest books is how the Cyclan, a bunch of cold-hearted geniuses who use math to predict and manipulate history, mimics Isaac Asimov's Foundation, but instead of glorifying them portrays them as villains.

I also think this volume moves the Dumarest saga forward in an interesting way.  Dumarest destroys the ring the Cyclan has been trying to get from him for the last few books (after memorizing the coded message within), he gets some clues about the location of Earth and about the Cyclan's possible relationship with Earth, and, to my surprise, not only does Veruchia survive the novel, but it looks like Dumarest is going to stay with her a while and serve as First Man of Dradea!  Is Dumarest putting down roots?  Becoming a family man?  What will drive him off Dradea and set him off again on his 33-book quest?  I'm genuinely curious about how the next volume, Mayenne, starts!