Early this week I read three more stories from Best of Kuttner 1.  Only two stories to go!  As we have come to expect, all three of these stories, according to isfdb, were collaborations with Kuttner's wife C. L. Moore.

"Absalom" was first published in Startling Stories, under Kuttner's own name.  A story about a college professor and about psychology, it has appeared in an anthology titled Transformations: Understanding World History Through Science Fiction and another called Hallucination Orbit: Psychology in Science Fiction.


"Absalom" is about the relationship between a father and son several generations after a nuclear war and covers Psych 101 topics like a father's envy of a son's success, the need for a son to rebel against his father, and how a father might live vicariously through his son.  (Psychology actually figures in quite a few of these Kuttner/Moore stories, like "The Ego Machine" and "Call Him Demon."  Long before the New Wave the soft sciences were getting attention from SF authors!) Joel Locke is a genius, head of the university's "psychonamics" department.  His eight-year-old son Absalom has an even more powerful intellect--mutations are leading to an increase in the proportion of geniuses in the human population, and to ever higher levels of mental ability.  Absalom is so much smarter than his dad, he doesn't even consider himself a member of the same race as his father!

Locke tries to keep Absalom from studying "entropic logic," ostensibly because he fears it will somehow damage his son's mind.  Absalom, however, knows that his father is just stifling him out of fear of being surpassed--Dad is too dim to comprehend entropic logic!  With the help of other child geniuses and the household's doting maid, Absalom tinkers with his father's brain, liberating himself from Locke's authority and leaving home to live with his intellectual equals.  Even with his hobbled mind, Locke resents Absalom, and looks forward to the day when Absalom's own son overthrows his father!

Covering a bunch of interesting topics in a relatively small number of pages, while still carrying a human drama narrative, "Absalom" is pretty good. 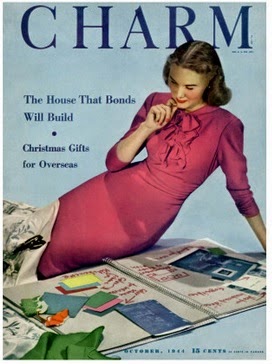 This story first appeared in Charm, a magazine aimed at fashionable professional women. If you are interested in 1940s and '50s fashions and fashion photography, the cover galleries at places like condenaststore.com and pinterest are worth a look.  "Housing Problem" appeared under Kuttner's own name.

Young marrieds Eddie and Jackie work in a munitions factory during the war.  They own a house, but their finances are not so hot, so they take on a boarder, Mr. Henchard. Henchard is somewhat odd.  For one thing, he is terrifically lucky.  For another, he has a birdcage that he always keeps covered, and admonishes E & J to never touch.  When Henchard is called away on business for a few days the young couple investigates the bird cage, to find that it contains a neat suburban house inhabited by tidy middle-class pixies!  In lieu of rent, the fairies bring Henchard the good luck his landlords have noticed.  (Kuttner and Moore wisely never let E & J, or the reader, see the fairies; this makes it easier for us to suspend our disbelief.)

E & J's meddling drives away the little people, and Henchard storms out, leaving the cage behind.  In a few days new fairies move in, but E & J's interference has given the house a bad reputation, and the new tenants are dirty, smelly, and loud.  E & J lament that they have become slumlords, that "the tenement type" has moved in!

"Housing Problem" is well-written and well-structured, and has been reprinted in numerous anthologies.  The most interesting thing about it, perhaps, is its social class-based humor.  Did Kuttner and Moore include this element in order to specifically appeal to Charm's bourgeois audience?  Did Charm's editor choose the story because of the class angle?  Or was it just a coincidence?

This tale appeared in Unknown Worlds (tagline: "Fantasy Fiction"), which, like Astounding, was edited by John W. Campbell, Jr.  Kuttner and Moore used their pseudonym "Lewis Padgett" on this one.

"A Gnome There Was" is, in part, a satire of middle-class left-wing activists who have no real sympathy with or knowledge of the proletarians they claim to be championing.  Tim Crockett of Southern California, we are told, "was junketing through the country, on his father's money, investigating labor conditions, to the profound annoyance of such laborers as he encountered."  He stupidly gets lost in a Pennsylvania coal mine, and then is transformed into a gnome, a grotesque creature four feet tall, three feet wide, with huge feet and no neck.  Gnomes, we learn, do not have sex, so to maintain their population a "tithe" of humans lost underground are transformed into gnomes. Crockett organizes the thousands of gnome workers, and leads a general strike against the gnome Emperor.  The strike is an absolute disaster for all the gnomes and for Crockett himself.

While it might be a comment on labor unions, for the most part "A Gnome There Was" is a silly humor piece full of childish jokes.  The gnomes love to be dirty and take mud baths, they eat coal, they love to fight and can fight endlessly because they are essentially immortal and invulnerable, etc.

The gnomes don't really mind working for the Emperor, so to get them to unionize, Crockett lies to them, telling them their Emperor is going to outlaw fighting.  Crockett is organizing the gnomes not out of concern for their well-being, but in his own selfish interest; he hopes to pressure the Emperor into using his magic to transform him back into a human being.  The punchline of the story is that in the ensuing magical battle, Crockett is transformed, but not back into a human being.

This story seems to be popular; it was selected by Robert Silverberg and Isaac Asimov for "Hall of Fame" and "Great SF Stories" anthologies.  To me it seems like a trifle, quite inferior to the interesting "Absalom" and the clever "Housing Problem," but I suppose it is inoffensive, and I can give it a (barely) passing grade.

Only two more stories left in Best of Kuttner 1!  I will probably get to them later in the week; hopefully they will be as good as "Absalom" and "Housing Problem."
Posted by MPorcius at 12:12 PM