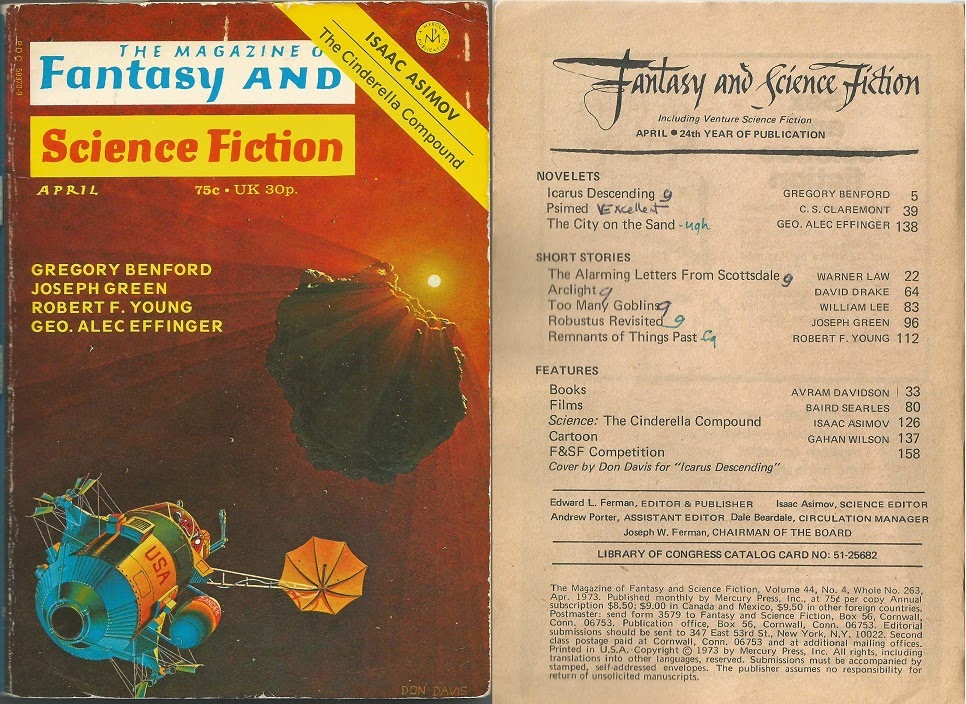 In the past I have mentioned that I often am not sure what to read, and will allow myself to be guided by the Fates.  Recently, in an Iowa antique mall, I came upon a copy of the April 1973 issue of The Magazine of Fantasy and Science Fiction.  I was charmed when I saw that a previous owner of the periodical had read and graded each piece of fiction therein.  I willingly parted with two bucks and brought the issue home with me.  This artifact provided me not only the chance to pass judgement on the work of science fiction writers, but the opportunity to pass judgement on the judgement of an unnamed stranger!

This week I read this individual's favorite story from the issue, "Psimed" by C. S. Claremont, his or her least favorite tale, Geo. Alec Effinger's "The City on the Sand," and a story which received the modal grade (look, I'm using math words), David Drake's "Arclight."   Of the eight novelets and short stories in the issue, five, including the Drake piece, received "g"s.  Let's see if MPorcius Fiction Log is on the same page with the SF fan we can know only as "Previous Owner."

If you look at Previous Owner's handwritten note, I believe we can gain an insight into his or her thought process.  It looks like Previous Owner was going to give "Psimed" a score of "VG," but then realized he/she was shortchanging Claremont, and upgraded "Psimed" to "Excellent."  (I am disregarding the possibility that Previous Owner's grade is the neologism "vexcellent," meaning "having the ability to cause a high degree of vexation.")

I've never read anything by Claremont before--in fact, I had to do some research to find out if Claremont was a man or a woman.  As people reading this probably already know, Claremont usually goes by "Chris Claremont," and is staggeringly famous for writing about Marvel's X-Men and collaborating with George Lucas on some fantasy novels.  I'm learning every day!

My man tarbandu has written a little about Claremont's comic book work and I think it is fair to say that tarbandu would not use words like "excellent" to describe it.  Torn between the disparate opinions of tarbandu and Previous Owner, I tried to go into "Psimed" with an open mind.

"Psimed" is the story of Petra Hamlyn, a female doctor in a future high tech New York.  I get the impression that Claremont often writes female protagonists.  Hamlyn is a showy individualist, wearing jewelry and short skirts in a society in which fashions are androgynous and conservative.  Male characters stare at her legs, female characters think she looks like a prostitute.  When a new colleague calls her "Doctor," she corrects him: "My name's Petra.  I'm afraid I despise formality...."

The child of a wealthy man collapses of a rare disease, and Hamlyn's team of doctors try to save the kid.  Hamlyn and the kid are both psychics, and, in this universe of Claremont's, psychics tend to lose their powers and get all angsty and then commit suicide.  There is some melodrama as the kid goes berserk upon learning he has lost his psi powers and when Hamlyn has a painful flashback to when she lost her powers while terrorists tortured and murdered her husband.  Hamlyn also has sex with the new colleague.  The story ends when the kid dies, and another one of Hamlyn's colleagues, a psychic who has melded his mind with the kid in an effort to save him, also dies.

I'm no expert on the X-Men, but it seems like the themes of this long, boring, and histrionic story about a small elite of angst-ridden people with special powers who are expected to use those powers to help society, have something in common with the themes of those X-Men comics.

So, what did Previous Owner like about this story?  I guess lots of people are into medical dramas, and into stories about people with special powers who suffer angst and alienation.  I don't find medical stuff interesting, and while I sometimes like the whole alienated mutant thing (I just gave Kuttner and Moore's "The Piper's Son" a positive review), I didn't think this was a good example.

"The City on the Sand" by Geo. Alec Effinger

I've already encountered Effinger and his short stories during the course of this blog's life.  My feelings have been mixed.  Let's see if "The City on the Sand" tips the scales one way or the other.  SF blogger extraordinaire Joachim Boaz thinks highly of Effinger, so again we see a blogger I admire at odds with the mysterious Previous Owner, who was at a loss for words to describe his or her unhappiness with "The City on the Sand."  Who will I side with?

"The City on the Sand" is a consciously literary and subtly amusing story about decadence and a life wasted.  It takes place in an alternate early 20th century world (they have electric lights and radios) in which Western Europe is so decadent that its people have not bothered to conquer or even explore the New World or Sub-Saharan Africa.  The main character, Ernst Weinraub, is a would be poet and novelist who has traveled Europe, but found no place truly congenial.  So he has settled in the one city of North Africa, where he sits at an outdoor cafe all day, drinking and watching people walk by.  He has an outline for a trilogy of novels but has made no progress on the novels in years.  When it rains he doesn't even have the energy to move inside or lower the awning.

Weinraub has done nothing with his life, he has no friends, no wife or children.  He doesn't make an effort to get his poetry published; he just hopes some tastemaker will spot him sitting in the cafe and "discover" him.  When people try to develop a relationship with Weinraub or enlist him in their projects (a Polish political activist is trying to raise a volunteer army to free slaves or something like that) he just waves them away.

I have to disagree with Previous Owner again.  Effinger's style here is good, and the setting and tone of the story are good.  I can see why someone wouldn't care for "The City on the Sand," though-- there's not much plot and certainly no action or sex.  This is a literary mood piece, but it is a good one and I quite like it.  My opinion of Effinger has just gone up.

In my youth I read and enjoyed Killer, which is about a space alien murdering people in ancient Rome, and was written by David Drake and Karl Edward Wagner.  I read a couple of Drake's Hammer's Slammers stories, and they just made me shrug.  I quite liked Drake's short story "The Barrow Troll," and in late 2010 I read his novel The Voyage and wrote a three star review of it on Amazon in which I focused on the fact that the protagonists are a bunch of amoral jerks.

So, that is a brief history of my relationship with David Drake, who seems like a competent writer but whose isn't always ideally suited to my temperament.  I was curious to see how I would respond to "Arclight."

Well, for once I am on the same page as Previous Owner; this is a good story.

Drake served with the U.S. Army in Vietnam and Cambodia, and this story draws on his experiences.  A cavalry unit (the main characters operate ACAVs, M113 armored personnel carriers equipped with additional machine guns and armor) accidentally uncovers an ancient Cambodian temple.  There is a hideous idol in the temple which the troops damage in the course of investigating the ruin.  Over the succeeding nights the soldiers dream of this monstrous statue, and some of them are mysteriously killed, their bodies horribly mangled.  Was it communist guerrillas who killed them?  A ravenous tiger?  We readers know it was an invisible demon!  The demon's campaign of vengeance ends when the U. S. Air Force bombs the temple into oblivion, demolishing the idol.

This is a solid entertaining horror story.  We've all probably read lots of stories about monsters from ruins terrorizing people, but Drake's story really benefits from its setting among American soldiers in South East Asia.  For example, I found the military stuff interesting (I was not familiar with the terms "ACAV" and "arclight" before.)  So, thumbs up for this one. 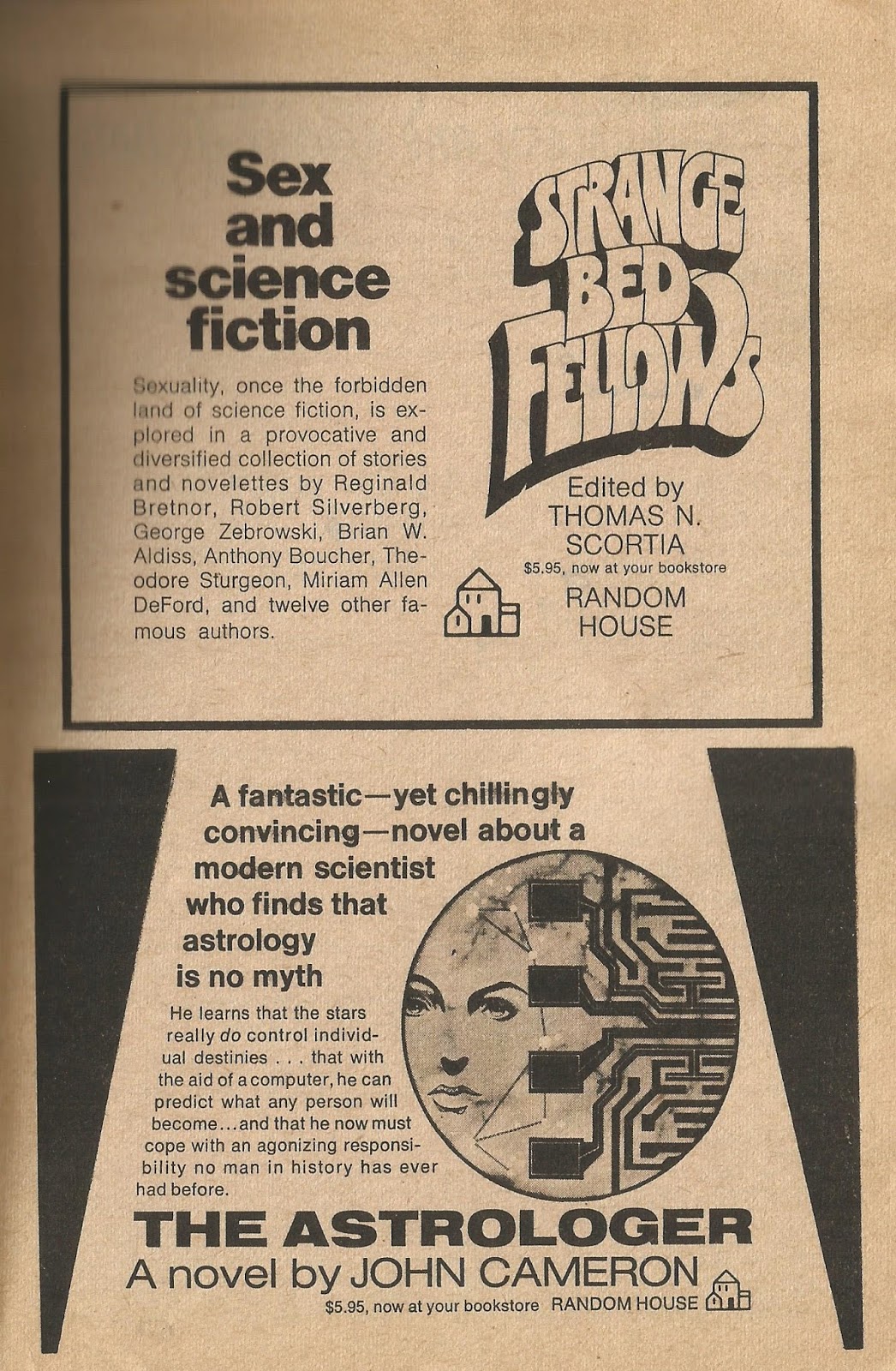 Even if Previous Owner and I have different tastes, I enjoyed my exploration of his or her old magazine, which gave me an opportunity to learn more about three authors I have only had a limited exposure to.

The April 1973 F&SF also has a bunch of interesting ads.  On the first page of my copy (which I suspect is in fact the third page--I think the first sheet of my copy was lost) we have an ad for an anthology of SF stories about sex.  Hubba hubba!  Also, an ad for a novel about what would happen if some guy figured out astrology was real.  I'd be curious to read some of the sex stories (despite the embarrassingly dumb font they use in the ad for the title), but the astrology book sounds horrible.

In the back of the mag (we cool people call magazines "mags," you know, to save time) we have the "Market Place," which is full of fun classifieds.  I had no idea there was a town in California called "Brubank."  Not only is there such a town, but the people there love dinosaurs!  There's an ad for Dianetics; these were the days before the Elronners had that John Travolta and Kirstie Alley money and could afford those TV ads we all remember.  A guy in Hawaii is willing to teach you telepathy.  You can mail three questions to a psychic in Illinois and for only ten bucks he will use his powers to answer them.  And if you don't have ten dollars and live in South West Canada, a guy will teach you how to pan for gold right in your own neighborhood!  Awesome!