Let's return to my 1965 British copy of The Best of Kuttner 1 and read four more tales by Henry Kuttner.  Bring the packing tape; this book is falling to pieces.

This story was first published under the pseudonym Woodrow Wilson Smith in Thrilling Wonder Stories.  The isfdb lists C. L. Moore, Kuttner's wife, as a coauthor.

Jerry Foster is one of those irresponsible guys who dates a different woman every day, spends his money at the race track and spends his time hanging around bars getting drunk and moaning about his problems to the bartender.  One particularly difficult day he leans against the jukebox, half drunk, and tells the machine that it is his new girlfriend, his true love.  The juke-box reciprocates by spitting out the money Foster needs to pay his bookie and then playing a song that includes the phrase "helping hand."  Foster bets on a horse called "Helping Hand" and makes a bundle.

The juke-box continues to give Foster career advice, and he achieves success.  But when he starts dating his secretary the juke-box gets jealous and stops helping him.  Financial ruin is staring him in the face, and things only get worse when Foster discovers that the juke-box is an alien surveillance device.  The aliens can't have Foster alerting the other Earthlings, and resolve to eliminate him.

"Juke-Box" is a sort of "Twilight Zone"-ish story, with its bizarre premise and macabre and jocular twist ending.  This one gets a passing grade; it is entertaining and just the right length (12 pages.)

This story first appeared in the May issue of Space Science Fiction under Kuttner's own name.  ISFDB credits C. L. Moore with co-authorship of the story.

This is a story about a robot who time travels from the future to the Twentieth Century to solve some problems.  (Don't tell Harlan Ellison's lawyer.)  Nicholas Martin is a successful Broadway playwright who has been trapped in a long term contract by a Hollywood director.  Martin's other problem is that he is too shy to declare his love for Erika Ashby, his agent.  Except for the robot, this sounds like P. G. Wodehouse stuff. 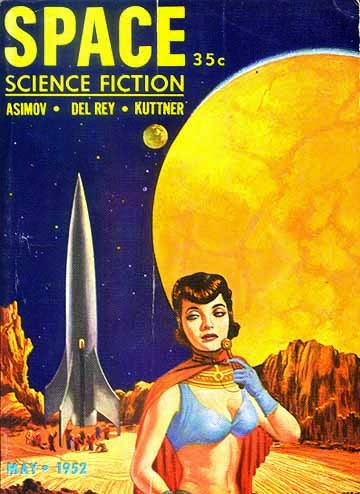 The robot from the future puts a helmet on Martin that temporarily rearranges Martin's brain cells so that they more closely follow the pattern of the ultimate man of Martin's type.  The model man of Martin's type is Benjamin Disraeli, the famous 19th century intellectual, politician and clotheshorse. With Disraeli's invincible self-confidence and heroic eloquence, Martin makes progress in solving his problems, but then has to deal with a violent foreigner who is immune to Disraeli's charm and logic.  Martin has the robot configure his brain to follow the matrix of a cave man known as Mammoth-Slayer. As Mammoth-Slayer, Martin is able to outfight the foreigner, and, in a commentary on women all you feminists will appreciate, not only Ashby but a second woman fall deeply in love with Martin after he grabs them up King Kong style, bites them on the ear (!), and declares them "Mine!"

This story isn't very good.  It is too long, 37 pages, for a story about such trifles, and the jokes are weak (guys, including the robot, get drunk; a guy spills his drink on another guy; the sex goddess of the silver screen is a narcissistic imbecile, etc.)  I've got to give this one a thumbs down.

"Call Him Demon" appeared under the pen name Keith Hammond in Thrilling Wonder Stories.  On the cover it is hailed as a "Fantastic Novelet."  As with the other stories we're looking at today, isfdb lists it as a collaboration between Kuttner and Moore.

"Call Him Demon" is in part an homage to L. Frank Baum's Oz books and Rudyard Kipling's Jungle Book. I haven't read the Oz books, which are revered by important SF authors--Robert A. Heinlein and Philip José Farmer come to mind immediately, and I guess we can add Kuttner and Moore to the list.  I've read and enjoyed some Kipling (Kim, The Light That Failed, and some stories, including "The Man Who Would Be King") but not the Jungle Book.  Heinlein and Poul Anderson, among other SF greats, were big Kipling fans.

It is 1920, and nine-year-old Jane Larkin has arrived at her grandmother's big house in Los Angeles.  Living among her relatives there is a stranger, an alien monster who has taken the form of a human being, and hypnotized the adults of the house into thinking he is a relative they have known all their lives.  But the resident children are immune to its mental powers, and know it has just moved in, three weeks before Jane's arrival. 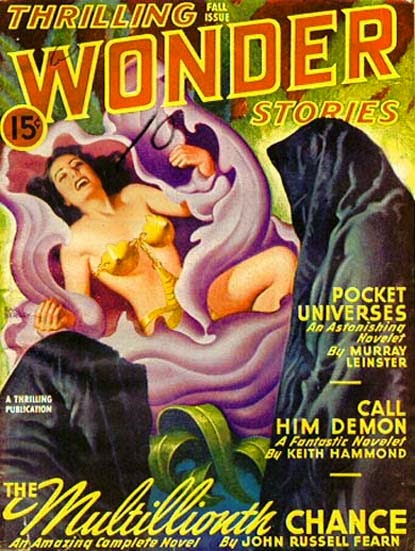 While an extension of the monster's physical form sits in a chair along with Jane's other adult relatives, the remainder of the alien, including its soul, resides in a nether world, a sort of space-time warp. Telepathically, the monster commands the children to feed it; the only food it accepts is raw meat, and to reach the "little, horrible nest he made by warping space" the kids have to climb up into the attic and fix a particular image in their minds as they cross the portal between the dimensions.

This story reminded me of Ray Bradbury stories about children who encounter alien or supernatural dangers, like "Zero Hour" and "The Man Upstairs," but it is not nearly as good as those Bradbury classics.  I feel like I should like this story, as the premise is good.  But the style doesn't work for me; the story is too long-winded and fails to convey any kind of fear.  "Call Me Demon" also lacks mystery; Kuttner and Moore employ an omniscient narrator and tell you exactly what is going on in the first five pages of the 20 page story.  Also, there are too many characters, like seven adults and five or six kids, and few of them stand out from the mass.  Because the characters are so dimly realized the horrific climax of the story lacks the power it could have had.

"Call Him Demon" is also one of those stories that romanticizes childhood, again and again talking about how children have different perceptions and psychologies than adults.  ("But Charles, who made the first discoveries, was only six, still young enough so that the process of going insane in that particular way wasn't possible for him.  A six-year-old is in a congenitally psychotic state; it is normal to him.")  Often in books and on TV they pull this on you--children can see fairies or whatever that adults can't--and I have never found it convincing or even interesting, and having encountered this conceit so many times I now find it annoying.

You've probably already guessed that I'm casting a negative vote on this one. 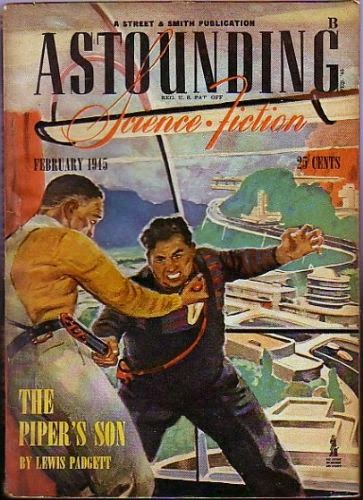 This one was the cover story of Astounding, with Kuttner and Moore's pseudonym Lewis Padgett getting top billing.

I had high hopes for "The Piper's Son." Astounding has a higher reputation than Thrilling Wonder Stories, and it was in Astounding that the most critically acclaimed Kuttner/Moore stories, "Mimsy Were the Borogroves" and "Vintage Season," appeared.  The cover illustration is also promising; fully clothed men fighting with knives or short swords in a futuristic city. (The bikini girls in outer space covers you so often see are fun, but rarely correlate closely with the contents of a story.)

It is some decades after a nuclear war.  The United States now consists of small independent towns; if any town gets too big for its britches, it gets nuked.  Similarly, men all wear daggers and duels are commonplace.  (These means of keeping the peace are somewhat reminiscent of ideas in Robert Heinlein's 1940s work, like Beyond This Horizon and Space Cadet.)  Thanks to radiation from the war, a proportion of the population are "Baldies," telepaths recognizable by the fact that they have no hair whatsoever.  Baldies who want to assimilate wear wigs, fake eyebrows and fake eyelashes.  Ordinary people often view Baldies with suspicion, and the fact that some Baldies, generally those who don't wear fake hair, use their powers to take advantage of ordinary people doesn't help matters.

The plot of the story concerns Burkhalter, a Baldy with a wife and a young son. Burkhalter, in his private life and professional life, has to navigate difficult relationships with non-Baldies who are scared or resentful of the telepathic mutants.  In the climax of the story, it is discovered that one Baldy in town is trying to stir up hatred of non-Baldies among the young Baldies, including Burkhalter's own son.  In an explicit reference to the Japanese and German ideologies that led to World War Two, this racist Baldy thinks that since Baldies are superior to ordinary people they should band together to rule or exterminate the normal people.  The assimilationist Baldies, led by Burkhalter, gather together to nip this problem in the bud.

In "The Piper's Son" Kuttner and Moore come up with an interesting milieu in which to discuss topics like prejudice, racism, relationships between parents and children, and means to maintain social and international peace.  As I had hoped, Astounding comes through with a serious, thoughtful piece that is engaging and entertaining without resorting to lame jokes.  Thumbs up!

(Under the Padgett name Kuttner and Moore wrote a whole series of Baldy stories for Astounding; later collected in a volume entitled Mutant.  Probably worth looking into.)

So, four stories, two weak, one acceptable, one good.  A decent record.  There is a lot more Henry Kuttner in my future.
Posted by MPorcius at 3:28 PM