Hugh B. Cave: "The City of Crawling Death," "The Crawling Curse," and "The Black Gargoyle"

In case I've never mentioned it, I lived in New York City from the late '90s through the oughts and every day I miss the towering skyscrapers, the bustling crowds, liberation from the automobile, the ships and boats on the river, Central Park, the Greek vases, Roman sculptures and English paintings in the Metropolitan Museum of Art, and still more things.  In the "still more" category is the New York Public Library, which would often get small press SF books.  One such book was a new book by Hugh B. Cave, who, somewhat amazingly, lived to the year 2004 after being born in 1910.  I borrowed this book, which I think must have been The Mountains of Madness, and was taken aback by how bad it was.  Since then Cave has been on my black list, though in 2015 I offered him a parole hearing and read a 1979 story of his--the story was mediocre, and he was not granted a reprieve.

Well, today as part of my project of blogging about at least one story from each and every issue of Weird Tales published in the 1930s, I am giving Cave another chance and reading three of his stories that appeared in the Unique Magazine.  Have I been wrong to avoid this winner of the Bram Stoker Award for Life Achievement, the World Fantasy Award for Life Achievement, and the International Horror Guild Living Legend Award? 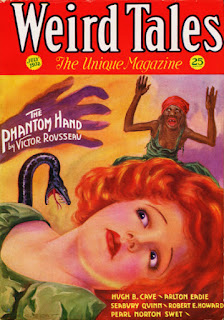 Remember that movie Them! in which the U. S. Army fights ants the size of box trucks with tommy guns and flame throwers?  And of course the Joan Collins giant ant movie, Empire of the Ants?  Good times, good times.  Cave's "The City of Crawling Death" also stars giant ants, these ones in the Amazon.  But good times will not be had!

Raould Trench is a man's man who finds science talk boring.  Professor Heinrich Murgusson is a scientist who is always tinkering away at a device which Trench can't begin to understand.  These two are travelling up the Amazon in search of Doctor Richard Lourd, who disappeared two years ago.  They are accompanied by a big strong local man, Manuelo, whom Trench and Murgusson call "the Portygee."  In a town near the limit of that territory where the white man has left his stamp our three protagonists encounter an Englishman who tells them of a town three days upriver that has been taken over by ants the size of your fist.  Trench and Murgusson suspect these ants have something to do with Lourd's failure to return to civilization.

Manuelo rows them upriver, to regions few white men have ever laid eyes on.  When they get to the town they heard about they find that, sure enough, it has been taken over by ants.  These ants, however,  have grown since that limey saw them--they are six feet long and three feet high!  Through his binoculars Trench sees that Lourd is being held captive by the ants!  There is a fight, and Manuelo is captured by the ants as well!

"The City of Crawling Death" is a simple-minded and poorly written action story, like something a kid would write.  There is no style or personality or atmosphere or emotion to this story.  It is full of bad sentences that I had to reread, and then reread again before dismissing them because I was confused by their nonsense:

Trench glanced down at the canvas-topped stool.  Upon it lay a heavy wooden box--a square thing of greenish metal, sealed on all sides, with a narrow lens-like aperture in front.

"When I connect the lens with that forty-pound Maxim of ours, the machine-gun is a machine, Trench.  A machine!"

There is no reason for the enemies to be ants--Cave doesn't write them as if they are ants.  He says they have developed a human intelligence, and again and again calls their antennae "tentacles" and has the giant ants use them to grasp and hold prey and to open and close doors.  They don't do any of the interesting things ants do, so Cave could just as easily had the enemy be aliens or a black magic cult or a lost Roman legion or something.

Anyway, Trench and Murgusson sneak into the village of the ants and unbind Manuelo and Lourd, and then the four men race to the boat.  The ants are right behind them, but on the boat is a Maxim machine gun to which Maurgusson has attached some prisms and a lens, thus turning it into a death ray projector, with which he wipes out the horde of ants.

Unsurprisingly, "The City of Crawling Death" (which isn't about a city, but a village where none of the characters dies) has never been reprinted.

Vesker is a Dutchman living in Indonesia who has some medical training and no scruples.  Tenegai LaRoque is half French, half native, a decent guy with a beautiful French wife, Renee.  Vesker and Renee desire each other, so they plot together and Vesker ambushes LaRoque and murders him with a lead pipe.  Then he cuts the poor guy into pieces and tosses the pieces into three different bodies of water.  But LaRoque's mother was a sorceress and a few days later, where Vesker is living with the faithless Renee, one of LaRoque's arms comes hunting them, crawling up to the door, crawling through a window, terrifying the servant boy, strangling Renee.  Vesker hides Renee's body, and then tries to learn about the sorcery used by LaRoque's mother by talking to some British guy he meets at a party, an expert on native magic. 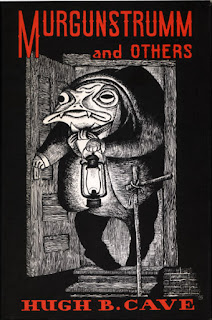 This limey foreshadows the next torment LaRoque's mother is going to inflict on Vesker.  Her tribe has mastered a type of black magic they use to kill people in a particularly gruesome fashion: you steal your target's clothes and put them on a dead body, and as the body decays, so does the owner of the clothes, though he is still alive!  LaRoque's arm crawls into Vesker's bedroom and drags off some clothes as he watches in disbelief; the clothes of course are soon being worn by Renee's concealed corpse.

This is a good black magic horror story, full of twisted necrophiliac overtones (Vesker spends quite a bit of time touching Renee's dead body--caressing it immediately after her death and then undressing it after the animated arm has attired it in his clothes) and creepy or sickening images.  Cave does a good job setting a tone and pacing the story and describing Vesker's lust and fear and all that.  It is almost hard to believe that this is the same guy who dumped the piece of junk that is "The City of Crawling Death" on Farnsworth Wright (and which Wright proceeded to drop on the rest of us.)

Thumbs up for "The Crawling Curse."  In 1977 LaRoque's arm crawled again in the collection Murgunstrumm and Others.  Maybe I should use that book's table of contents as a guide to what Cave stories I should read instead of just selecting them haphazardly the way I do everything in my life. 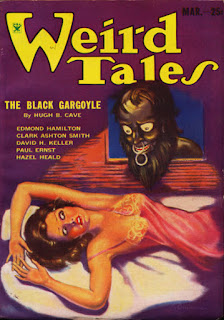 Cave's "The Black Gargoyle" is the cover story of an issue of Weird Tales that includes two stories we have already read in book form, Hazel Heald and H. P. Lovecraft's "Winged Death," a story I quite liked, and Edmond Hamilton's fun space war extravaganza "Thundering Worlds."  "The Black Gargoyle" would be reprinted in The Corpse Maker, a 1988 collection from a small publishing house, Starmont, part of their Popular Culture Studies series.  In the same series they published an entire book on Cave's life and career, so I guess if I want help picking the Hugh B. Cave silver from the Hugh B. Cave dross, they are the people to call upon.

Indonesia again.  Our narrator and his buddy Martin are passing through, on their way to join a museum expedition.  Gomez, head of the garrison at an outpost they stop at, puts the two men up in a vacant native hut full of centipedes and insects and decorated with disturbing artifacts, like skulls and a preserved head and a hideous mask.

The outpost is an unpleasant place to be.  Gomez keeps the natives under control through ruthless punishments and fear, and he enjoys telling stories detailing the cruel and unusual ways he has disciplined and executed malefactors and rulebreakers.  At night there are all kinds of scary noises from the jungle, including what sounds like human screaming.  These screams have unnerved a young white government employee, Trellegen, who has been at the outpost for about a month with his beautiful wife.  Gomez claims the screams are the work of natives who resent his authority and think they can scare him into abandoning his post, but after hearing the screams himself, Martin suspects it is the sadistic and manipulative Gomez who is producing the screams in an effort to scare Trellegen, perhaps as a way of driving a wedge between the young man and his gorgeous wife.

Gomez shoots down a native servant for (he says) stealing whiskey, and when the dead man's brother-in-law comes by to ask what happened, Gomez tells the guy that Trellegen was the shooter! 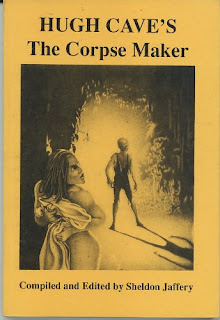 A crazy series of events follows, what you might call a comedy of errors but with horrific consequences.  Martin has the dumb idea of scaring Trellegen by putting on the hideous mask and sneaking up on him, thinking a shock that turns out to be harmless will cure the guy's nerves, toughen him up so he can face down Gomez.  The same night Martin is putting this moronic scheme into action the brother-in-law guy comes to town to murder Trellegen, and in the dark mistakes Martin for Trellegen and throws his parang at him--luckily, it is just a flesh wound.  Meanwhile, the sight of Martin at her window drives Mrs. Trellegen hysterical, and her incoherent description of the mask, which of course she only saw briefly and in low light, makes her husband think it was Gomez at the window.  Trellegen, forgetting his own fears now that he has to protect his beloved wife, takes a revolver and goes to Gomez's shack to deal with him.  The narrator tags along, and in the shack they are confronted with an unbelievable sight--a severed human head with tentacles growing out of the stump of its neck has apparently killed Gomez and is now devouring the man's face.  Trellegen shoots the head dead.
The narrator soon learns, by reading Gomez's journal, that the head was the preserved head in the hut shared by he and Martin, the head of a native sorcerer who had sworn revenge on Gomez as Gomez tortured him to death.  It seems the screams that initially gave Trellegen so much anxiety were the head's, reflective of the growing pains of growing tentacles.  Martin and the narrator bury the remains of Gomez and the avenging head, and lie to the authorities about everything; the Trellegens leave the outpost for a more comfortable locale.

This story is just OK; some of the elements are just a little too silly for it to be a truly effective horror story.

We may well encounter more stories by Hugh B. Cave in future installments of MPorcius Fiction Log, but I may try to stick to stories that have been selected by editors for inclusion in later books as a means of avoiding another embarrassment like "The City of Crawling Death."