August Derleth and Mark Schorer: "The Pacer," "They Shall Rise" and "Death Holds the Post"

Mark Schorer was a college professor who taught at Harvard and UC Berkeley and a writer whose stories appeared in the magazines you are supposed to read, like The New Yorker, The Atlantic Monthly and Harper's.  He was also childhood friends with August Derleth, and the two of them co-wrote a bunch of science fiction and horror stories, most of which first appeared in Weird Tales and were eventually collected in the 1966 book Colonel Markesan and Less Pleasant People.  Let's sample some of these collaborations in old issues of Weird Tales you can read gratis at the internet archive. 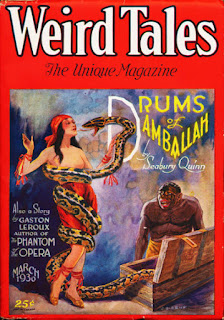 "The Pacer" (1930)Larkins, a somewhat snooty writer who wears a monocle, rents a house in London for the winter, even though the house, once the domicile of the deceased Brent, a mentally unbalanced scientist who had some crazy theories about the soul and how one might retrieve a soul from the afterlife and put it into a living body, is reputed to be haunted.  Sure enough, one day when Larkins is typing away at his latest novel down on the ground floor, he hears footsteps and banging from the floor above, from the locked room that he has been subtly enjoined to never open.

Larkins, by reading old newspapers, corresponding with one of Brent's old colleagues, and searching around the house and its yard for clues, pieces together what is going on but also puts his own life and soul in peril.  I found it a little confusing, but I think Brent convinced some poor bum to participate in an experiment in which Brent would push the bum's soul out of his body and summon a dead person's soul from the ether the (Brent thought Heaven and Hell merely myth) to put into the bum's body.  But instead of a human soul Brent summoned the soul of some embodiment of evil.  Brent killed the bum's body and buried it in the yard, but the monster soul did not return to the ether; rather, it hung around the buried corpse and the house and made all those noises and attacked people who went into the locked room to investigate, killing them and stealing their souls.  There is a hint that if the monster takes Larkins's soul it will have accumulated enough souls to accomplish some work, maybe some horrible deed, maybe just returning to the ether.

I like the style in which this story is written, and the pacing and all that, but I am not sure Derleth and Schorer did a good job of connecting the corpse, the monster and the noises in the room.  People only get killed, apparently, when they open the door to the locked room, which would make more sense if the body was in the room, but it isn't, it is outside.  Why doesn't the monster attack when people are in the yard, or in other rooms of the house (the corpse is underground, so closer to at least one ground floor room than to the locked second story room)?  The monster is actually able to leave the locked room to kill people who have opened the room's door.  If the monster is immaterial, just a soul, how does it make all that noise?  To my mind, the story would be better if Brent had secreted the bum's body inside the room from which the noises issue, in a dumbwaiter or chimney or between the walls or under the floor boards or something, and/or people only got killed in the room.

I think "The Pacer" may include a revealing little inside joke--Larkins is making up his novel as he writes it, with no idea where it is going, and one wonders if this is a reflection pf Derleth and/or Schorer's practice, perhaps in this very story.  Maybe they decided to write a story about a closed room from which footsteps are heard, and wrote the beginning of the story, but then could only come up with half-baked ideas for how to resolve the story and explain the noises.

I'll say this one is OK; the premise and the beginning and middle are good, but somehow the resolution doesn't quite work.

"The Pacer" has been reprinted a number of times, including by Robert A. W. Lowndes in his Magazine of Horror in 1964 and Kurt Singer in his Horror Omnibus in 1965. 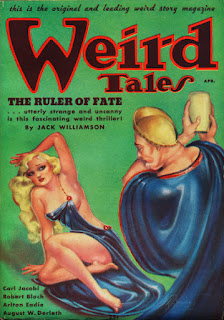 Like so many weird stories, this is the written testimonial or memoir of a guy who went through a terrible ordeal and now suffers mental instability.  He has tried to tell people his story, but was unable to get out the words, and so now tries to write them down.

This shattered man is Valens, until recently a medical student in Wisconsin.  His constant companion in school was his classmate, Stan Elson.  These two guys spent a lot of time in the school lab, dissecting cadavers.  An old guy in clothes that went out of style decades ago showed up at the school, saying he was Doctor Septimus Brock from Scotland, on a tour of the USA looking at the laboratories at medical schools.  This guy was so strange, with a weird voice, pale skin, and a mechanical way of moving, he disturbed everybody he met.  Derleth and Schorer provide many clues that indicate to us readers, if not the people at the med school, that Brock is in fact dead and has somehow reanimated himself.

Valens thought he recognized Brock's mug from someplace, and looked through his books, finding an entry on Brock in a reference work as well as a paper written by Brock.  Brock was born over 100 years ago, and in his old age was thought insane and locked up, but escaped and disappeared.  Brock's paper presents his passionate belief that the living mistreat the dead and so the dead should rise up and get their revenge; in the monograph Brock suggests he will raise an army of the dead and accomplish this feat of what we today would call social justice.

Valens ultimately succeeds in destroying Brock and saving the world from a revolution of the dead, but in the process Elson is killed and Valens loses his sanity and ability to vocalize, as we saw in the beginning.

The premise of "They Shall Rise" is OK, but many scenes and elements of the story just don't ring true, with people acting in ways that make no sense; it is impossible to suspend disbelief in the story because again and again the reader is confronted with instances of large numbers of people witnessing strange events that indicate Brock is up to no good but doing nothing in response.  For example, the college newspaper is full of stories of disturbances at medical school laboratories all over the country, and each disturbance is connected with the appearance of an old man with a green umbrella.  But when Brock walks into a classroom full of medical students, green umbrella in hand, the very day after a bunch of cadavers was found outside the cadaver storage room, none of the students nor their professor puts two and two together.  Valens never considers just calling the police, who must know about the disturbances around the country because at Harvard, Yale, Princeton, and Columbia these disturbances have lead to the deaths of students.  And that is only a sample of the nonsensical things in the story (we might also, for example, ask why Brock doesn't give a false name or wear different clothes--doesn't he know his name and attire are recorded in books and newspapers?)

(If I was to play devil's advocate here, I'd say we have reason to believe Brock is a master hypnotist who scrambles the brains of everybody he meets, which is why everybody acts irrationally around him and doesn't take the obvious steps that would stop him, but Derleth and Schorer don't make this clear, and Valens doesn't do anything to overcome this hypnotic power, he just shoots Brock with a pistol.)

Gotta give this one a thumbs down; it is like a rough draft the authors never bothered to whip into shape.

"They Shall Rise" debuted in the same issue of Weird Tales as the fifth installment of Robert E. Howard's quite good The Hour of the Dragon and Carl Jacobi's quite bad "The Face in the Wind" and has reappeared in a couple of anthologies and a few Derleth collections, including some European books with striking cover illustrations. 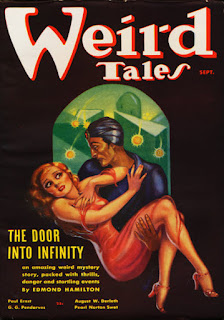 This is a story of the French Foreign Legion in Algeria.  When word got to the French fort at Surdez that the fort at Mechar was under attack, fifty men marched from Surdez to Mechar to help out.  Only one of those men returns, to report that they found  Mechar in the hands of an army of animated corpses, and said army ambushed and wiped out the detachment from Surdez!  At first the commander at Surdez doesn't credit the sole survivor's crazy story, but then additional info comes to light that corroborates his bizarre claims, including word that a German mad scientist who believes he can animate the dead has escaped a sanitarium and is suspected of having made his way to Algeria!

The commander comes up with a plan--one of his men will pretend to be dead in order to infiltrate Mechar and find out what is going on in there.  The plan succeeds; our main character gets inside the fortress walls and observes the German's methods: he pours an elixir into dead soldiers' mouths, and then uses hypnotism on them.  The hypnotism is key: when the main character shoots the German down all the living dead collapse, inert once more.

Like the other two stories we are talking about today, "Death Holds the Post" feels a little shoddy, like it is not quite finished, the various moving parts not quite meshing.  Having reanimation be a two-step process involving chemistry and hypnosis seems a little silly; obviously for the plot to work there must be some connection between the German madman and the corpses, so killing Herr Doktor deactivates the living dead, but why also include the elixir?  The elixir is a weak link in the story: pouring an elixir into a dead person's mouth seems like a futile exercise, as a corpse can't swallow and its blood is no longer circulating.  When the hero is playing possum the German puts the elixir in his mouth, and it is a little odd that this presumably powerful drug has no side effects on a living person, and you also have to wonder how a trained doctor who spends all his time among corpses doesn't realize the legionary is alive when he touches him.

Barely acceptable.  "Death Holds the Post" has reappeared in a few Derleth collections, including a Dutch one in 1968 and in anthologies such as Baen's Phantom Regiments in 1990. 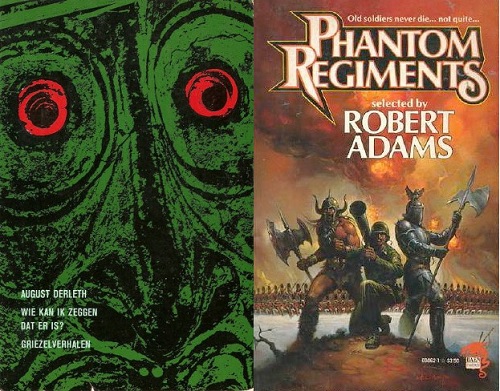 These stories were pretty discouraging.  I don't think I'll be reading any August Derleth stories for a while.