Clark Ashton Smith: "The Phantoms of the Fire," "The Necromantic Tale," "A Voyage to Sfanomoe," and "The Immeasurable Horror"

I lived in Columbus, Ohio a while and somehow three years later I can still use the Grandview Heights Public Library hoopla system to borrow e-books for free.  So it is with ease that I can read on my phone or laptop stories by Clark Ashton Smith from 2006's The End of the Story: Volume One of The Collected Fantasies of Clark Ashton Smith.  All of these stories originally appeared in Weird Tales in 1930 or 1931, but it is perhaps worthwhile to read them in this 21st-century book because the people who put it together have endeavored to make sure the texts in it represent as close as is possible Smith's intent, before editors at magazines had a chance to alter them.  It is possible that the versions of these four stories I am reading are different (and more "authentic") than those available at the internet archive in scanned copies of Weird Tales. 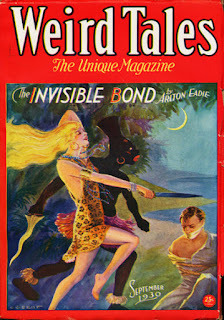 This is like a minor mainstream story with quite little weird or speculative to it.  Jonas MacGillicuddy, a failed farmer, left his wife and three kids three years ago to tramp around, finding little success in his travels hither and thither.  So today he is returning on foot to his Northern California ranch and his family.  When he crests a rise he sees that there has been a fire that has devastated the landscape, felled trees and blocked roads.  When he gets to his ranch he is relieved to see that it is intact and his wife and two daughters are standing before his house, quite alive.  But then there is a flash of fire and Jonas falls over, unconscious.  When he wakes up we readers realize the ranch and his family were an illusion or a ghost, because the ranch has been totally razed and his family burned to death--as a neighbor relates, they died screaming.  Smith introduces some tragic irony when the neighbor suggests that the house and family might have survived if some trees near the house had been cut down--Jonas had always wanted to fell them, but his wife had insisted he refrain, because she liked them.

Dangerously close to being a waste of time, I'll call this one barely acceptable.

This trifle of a story has never been anthologized, but has appeared in several Smith collections, like Genius Loci and Other Tales, published in 1948 by Arkham House and subsequently reprinted in paperback. 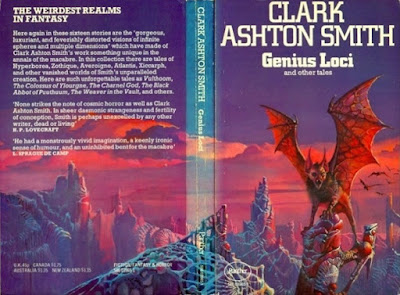 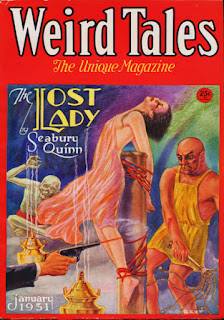 Sir Roderick Hagdon is an Australian owner of a sheep-range who learns that a bunch of his male relatives back in merry old England have keeled over so he now inherits the baronial estate and lordly title!  He has never been to Europe, but when he gets to England and the ancestral estate it all feels oddly familiar and he loves every last moss-covered stone of the house and lichen-covered statue in the garden, all the old volumes of poetry in the library and the dusty portraits in the hall.

As he researches his ancestors he finds few references and no paintings of one pair of them from the early 17th century, a man with his same name, and his wife--he can't even find a record of the wife's name.  The newly-minted baron from down under works obsessively to learn more about the mysterious forgotten couple, and eventually uncovers a secret door and behind it a hidden cache of papers and paintings, and sits down to learn the truth about his namesake and his darkly beautiful wife, a woman the documents compare to Lilith and Circe, Elinor D'Avenant.

In some Robert E. Howard stories we recently read, "Children of the Night" and "People of the Dark," guys kept getting tolchocked on the cabeza and having their souls merged with an ancestor or past life and so they could experience horrible adventures in the distant past before waking up back in the 20th century.  Well, here in Smith's "The Necromantic Tale" a similar thing happens to Sir Roderick Hagdon.  Reading ye olde yellowing manuscript, Sir Roderick is transported into the consciousness of his namesake ancestor of the early 1600s and lives out that poor fallen man's adult life, a tragic tale of degradation!

Sir Roderick wasn't such a bad guy, but he fell in love with Elinor D'Avenant and didn't learn she was a Satan-worshipping sorceress until they were married and he was irrevocably smitten by her.  "...[S]he told him of those delights and privileges which are procurable only through damnation, through the perilous aid of demons..." and his love for her overpowered all sense of propriety and piety.  Under her tutelage he became a devil-worshipping necromancer himself and with her indulged in bacchanals with succubi and incubi among other sins.  Eventually the local people had had enough of this diabolism and Sir Roderick and Elinor were tried by the authorities and burned at the stake.  Twentieth-century Sir Roderick comes out of his trance just as the flames are licking his ancestor's ankles, and he finds he has burn scars on his own 20th-century ankles!

Smith's descriptions of the Hagdon estate and Sir Roderick's state of mind are all good, and I always like a story about a disastrous sexual relationship that reminds us of how love and lust make us do dumb things we'd never do if we were in our right minds, so thumbs up for "The Necromantic Tale."  Solid classic horror material.

Vic Ghidalia included "The Necromantic Tale" in his 1972 anthology Wizards and Witches, and of course it has been in several Smith collections. 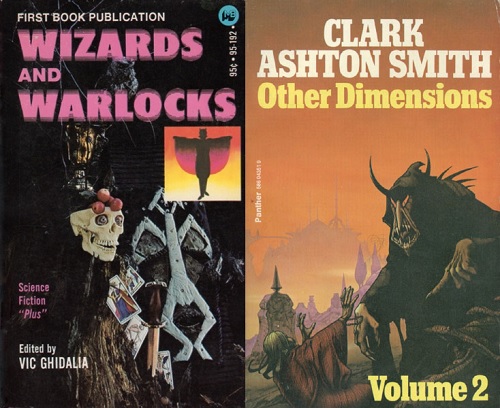 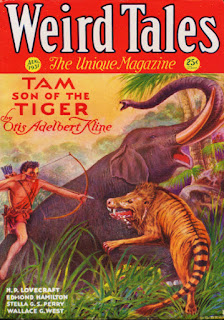 "Sfanomoe" is the name Atlanteans call the planet Venus.  Brilliant scientists and brothers Hotar and Evidon are members of the last generation of Atlantis.  They try to figure out some way of stopping Atlantis from sinking and their civilization from being destroyed, but the science is settled--there is nothing that can be done to forestall the catastrophe.  So, without telling anybody, they abandon the project of trying to save Atlantis and in a remote region of the island focus all their resources on building a spherical space ship which they ride off the Earth and steer towards Venus.

The sphere is slow, as space ships go, and it takes the brothers decades to reach Venus.  They are still close enough to Mother Earth to watch Atlantis finally disappear beneath the waves.  Hotar and Evidon are imperturbable, detached, and nothing that happens seems to discomfit them, so they consider the long trip no hardship.  When they finally get to Venus they are old men.  Venus is a world covered in strange flowers of all sizes, flowers that grow at a remarkable pace.  Flowers invade Hotar and Evidon's bodies, and they die painlessly as flowers take over their bodies.

This is a dreamy trippy sort of story in which very little happens and which evokes little thought or emotion in the reader, at least if the reader is me.  I can't say "A Voyage to Sfanomoe" is shoddy or clumsy or that it fails to achieve what Smith wanted it to achieve, so I don't feel quite comfortable calling it bad, but it is so neutral and static that it is sort of a waste of time.  I guess I'll wimp out and declare it "barely acceptable."

"A Voyage to Sfanomoe" is one of Smith's Poseidonis stories (Poseidonis is the last island of atlantis to go under) and has appeared in many Smith collections and a few anthologies. 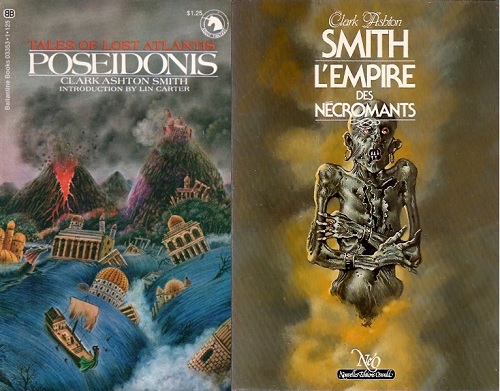 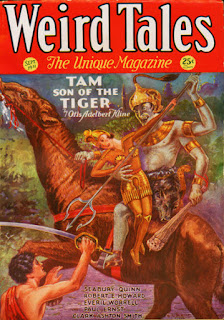 Richard Harmon, the narrator of "The Immeasurable Horror," tells us that Venus was not meant for man, and he should know, because he was on the first two expeditions to the second planet from the Sun.  None of Venus's wealth could ever temp him to return today, and to explain why, he describes his experiences on those two expeditions.

The first in 1977 was quickly wrapped up after landing, because Venus's atmosphere was more toxic than anticipated and an insufficient supply of oxygen had been brought.  The second mission in 1979 was better prepared.  Harmon, an engineer, was given command of an aircraft and four scientists, and ordered to survey the planet.

The five explorers flew for hours over vast jungles swarming with vicious life and rivers that dwarfed the Amazon.  They landed in a rare clearing and got out to to get a closer look at the monstrously huge reptiles and towering carnivorous plants--all these things tried to kill the astronauts, and they had to repel them with their heat rays.  The plants on Venus, the Terrans found, grow so fast that the clearing would be covered in dense vegetation in an hour or two--this clearing must have been made only an hour or so ago!  The clearing was a mile-wide trail, disappearing into mist in both directions, and the Earthers followed its course in their flyer, curious as to what could be clearing the tenacious vegetation.

It turns out that the trail is being left by a colossal pink blob of goop, a mile wide and some miles long,  a monster bigger than a city block that moves, faster than a man can run, by contracting and expanding.  Harmon calls it "a glacier of flesh."  It dissolves everything in its path, and even has some kind of magnetic power that draws flying creatures down to it to be devoured.  The creature tries to attract Harmon's aircraft, and the Earthmen have to use the vehicle's guns to get away.

Harmon lands a few hours later atop a mountain to rest, and while the astronauts are sleeping the huge blob catches up to them and engulfs the aircraft!  The explorers manage to escape, but not without casualties as the monster's acidic secretions dissolve holes in the flyer and hideously disfigure and poison crew and passengers!

An extravagant and disgusting monster story full of gore and gun play, like a 10-year-old boy's daydream; I really enjoyed it.  Thumbs up!

"The Immeasurable Horror" was reprinted in 1939 in the British magazine Tales of Wonder under the title "World of Horror" and by super-editor Donald Wollheim in 1951 in the Avon Science Fiction Reader.  And of course you can find it in plenty of Smith collections. 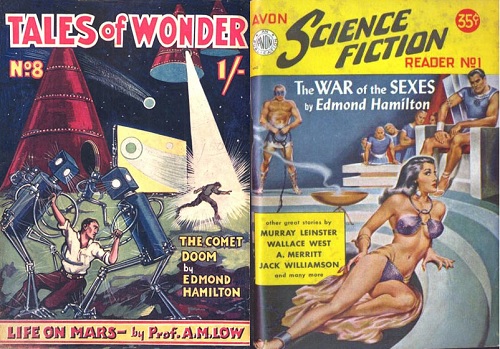 "The Phantoms of the Fire" and "A Voyage to Sfanomoe" just kind of sit there, the former uncharacteristic of Smith's work, the latter typical of his poetic style but lacking any dramatic weight or a compelling plot.  "The Necromantic Tale" and "The Immeasurable Horror," on the other hand, are quite entertaining, good examples of what I look for in these old pulp magazines.  Hopefully I'll find equally fun stories in the next episode of MPorcius Fiction Log when we yet again look at stories from Farnsworth Wright-era Weird Tales.