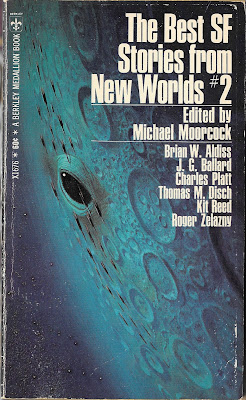 Joachim Boaz was recently singing the praises of Michael Moorcock's New Worlds, in particular singling out the art design work of Charles Platt (whom I have been praising on this blog for his fun and provacative interviews of SF writers.)  So let's check out three stories from The Best SF Stories from New Worlds #2, edited by Moorcock and published in 1968, including one by Platt and selections from New Wave icon J. G. Ballard and one of my personal faves, Thomas Disch.

I have the 1969 Berkley printing with a terrific (Paul Lehr?) cover in a beautiful blue that succeeds in simultaneously conjuring up the majesty of both the moon in outer space and a whale in the ocean depths.

This five-page story consists of 18 paragraphs, each with its own title.  (In his interview with Ballard in Dream Makers, Platt imitates this distinctive formatting.) I have to admit I had to read the story twice to make much of it; befitting (what I take to be) its themes, it is a bit vague and abstract.

The plot, as far as I can tell, is about a guy, Tallis, who goes to a seaside resort, where he meets a woman, Karen Novotny, and has a sexual relationship with her.  He spends a lot of time pacing in her spartan white-walled apartment.  He then meets another woman, Coma, and murders Novotny. 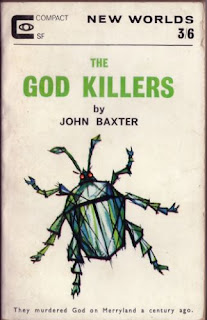 The themes I am getting from this story are decay, alienation and abstraction.  The setting is some kind of post-cataclysmic scenario; the resort is "deserted," a planetarium at the resort is "dead," on the beach there is a car "buried in the sand."  Tallis has some kind of mental illness, and when a doctor helicopters in to see him, we find the doctor has lost his ability to speak, his "jaw moving in exaggerated spasms" but producing no audible sounds.  Novotny feels "a mood of abstraction," a "growing entropy" and an "increasing sense of disembodiment."

The women Tallis encounters, the beach landscape, and the white apartment are described monotonously in geometrical, mathematical terms, and all are linked, one to another, as if they are some bland unified whole, depriving them of any life or personality.  "The white flanks of the dunes reminded him of the endless promenades of Karen Novotny's body....the white recti-linear walls, Tallis realized, were aspects of that virgin of the sand-dunes whose assumption he had witnessed."  (This is a sharp contrast to the seaside resort described by Proust in In Search of Lost Time, where every person, room and element of the landscape glows with life and has a shimmering, distinct personality.)

Marilyn Monroe is mentioned repeatedly, but every mention refers to her in death: her thighs are "volcanic ash," the broken dome of the planetarium is like one of her "eroded breasts," the white walls of the apartment are like her cheekbones.  Like a deserted pleasure resort on the sea, the lush and vivacious Monroe, whose death was so pathetic, is a vivid metaphor for scintillating life fallen into sterile desiccation.  Showing off his erudition and taste, Ballard also brings up the Hindu yantra, vorticism, and Max Ernst's Robing of the Bride.

This story is intriguing, presenting a challenge and even providing an education (I had never heard of yantra before), and there are many mysteries about it I haven't brought up here (e. g., who is the "You" of the title?) and no doubt many I didn't even notice. But I can't say it is truly enjoyable or entertaining.  The suicide of Marilyn Monroe, a madman murdering his lover, a seaside resort and a planetarium falling into ruin, should all make me sad or angry, but the story is too cold, clinical, even a little gimmicky, to affect my emotions.  In the aforementioned profile of Ballard in his book Dream Makers, Charles Platt suggests that Ballard's "obsessions are more with landscape than with ordinary human relationships" and tells us "You : Coma : Marilyn Monroe" is the first of Ballard's "condensed novels," which dispense with the "usual elements of fiction" like dialogue and conflict and consist primarily of "images, metaphor, landscape, message, and myth-figures."*  Perhaps because I have botched my own, I find human relationships fascinating, and when done well I enjoy the "usual elements of fiction," so maybe Ballard really isn't for me.

I'll give "You : Coma : Marilyn Monroe" a recommendation, as it is a worthwhile experience, but, judged by conventional measures of what we look for in fiction, I think it falls short.

Ballard's story, with its innovative, convention-defying technique, is very "New Wavey," but Platt's story is a traditional SF tale about technological innovation, in which the main character succeeds in achieving his goal through technical expertise and trickery.  Where it is, sort of, reminiscent of the New Wave is in its subject matter: pop music. 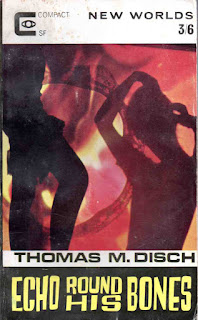 Our hero works in the record industry in the London of the near future of 1982, and the story is, in part, a satire of that industry.  It makes the sort of comments about pop music I remember seeing in episodes of The Flintstones: pop audiences are fickle and respond to gimmicks and fads, so the record industry is in constant upheaval, with new acts appearing all the time, rocketing to popularity and then collapsing into obscurity just as quickly.  Platt also includes a joke about how record companies strive to identify and appeal to the lowest common denominator in an effort to achieve a wide audience.

The plot: The protagonist uncovers evidence that a rival record company is about to market some new gimmick, and engages in industrial espionage, getting a job at the rival firm in order to learn its secrets and headhunt its best employees.  The new gimmick is an elaborate electronic device that can amplify listeners' emotions (with rays or something); if a song makes a concertgoer sad or happy or whatever, this device will make him far far more sad or happy.  Our hero tries to get the genius who has invented this device to abandon his current employer for the hero's, but the genius is not interested in leaving, because he is in love with the boss's daughter.  So the protagonist meddles with the device, altering it so that it makes the genius fall out of love with the girl.  This results in the headhunting mission achieving success.

"The Total Experience Kick" is an acceptable story.  People fascinated by the music industry might appreciate it more than I did.  Maybe historians of pop music could use it to get a sense of what people thought about the record industry in the mid-60s?

Three quite brief stories (none is over five pages) by Disch, "The Contest," "The Empty Room," and "The Descent of the West End," all appeared in a single issue of New Worlds, and they appear together in The Best SF Stories from New Worlds #2 as well, though they have appeared separately elsewhere. 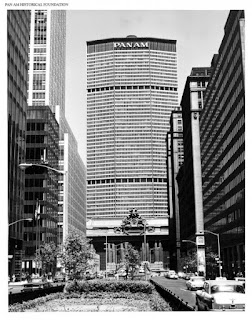 I think Disch is a very fine writer and an exciting and perceptive critic with a vast store of knowledge and all that, and I wish I could find a way to recommend all of three of these little pieces, but I cannot. Two, including "The Contest," are silly absurdist stories that are supposed to be funny but did not make me laugh.

These three stories have at their centers depressing asymmetrical love relationships and the common Disch theme that our lives are out of our control, subject to callous, irresistible, unknowable forces.  "The Contest" has two men walking the streets of Midtown Manhattan--the Pan Am Building (it was the Met-Life Building by the time I got to Manhattan) and the Seagram Building are namechecked--in a totalitarian near future America.  One tells the other about a sexual relationship he had with a paranoid woman, suggesting that the woman's love for him was fostered rather than stifled by society's totalitarian nature.  The paranoid, he relates, committed suicide.  The second man, revealed as a secret agent, then shoots down the first man, and we readers are left to wonder exactly why.

This story takes place in a future in which people lacking in skills can rent out their brains part time for use as components of semi-organic computers (Disch compares such people to vacuum tubes.)  A middle-aged man with just such a job is apartment hunting in New York with his twenty-something wife or girlfriend.  They look at a crummy apartment, the only kind they can afford; while investigating it the woman repeatedly asks for assurances that he loves her, and admits that she is not sure she loves him.  They remark that life is not as fun or meaningful as they had thought it would be as children, and when they consider if they are responsible for their own unhappiness, they tentatively conclude they are not.  The couple decides to take the apartment, telling each other, though they know they lie, that they will only live there short term and the landlord will fix the place up before they move in.

This is the best of these three stories; it has a plausibility and an emotional power the other two lack, and includes a few interesting SF touches (e.g., women wear disposable paper bras and panties and carry multiple changes of underwear in their purses.) 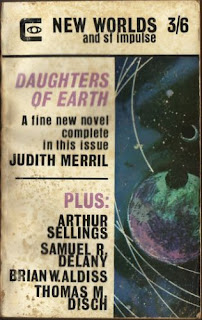 This is the most outwardly comedic of the three, with lots of jokes.  A cruise liner gets in a collision with another vessel, and begins to sink.  The captain refuses to believe the ship is sinking, and won't order the lifeboats lowered.  (All three of Disch's stories here have authority figures who are derelict in their responsibilities.)  An elderly fortuneteller tries to seduce a young member of the ship's crew; when her husband knocks on the door to warn her that the ship is sinking, she hides the young man in a trunk; he gets locked in the trunk and dies of suffocation as the trunk floats in his septuagenarian pursuer's stateroom.  There's also a bit about an Irish poet giving an incomprehensible reading which the radio officer tries to transmit via telegraph to the world, while the ship is sinking and he should be calling for help.  (Does Disch, an expert on poetry and a voluminous writer of poetry, have some particular poet in mind here?)

The Ballard story is experimental enough and challenging enough that it seems to fit into a "Best" anthology, but the Platt and Disch stories feel like trifles.  Maybe they felt fresh when they were new?

More stories from The Best SF Stories from New Worlds #2 in our next episode.  Stay tuned!
Posted by MPorcius at 11:51 AM