Clap on your pith helmet!  Load your revolver!  Polish your binoculars, pack your mosquito net and fill your canteen!  Today we're exploring new territory!  Before us lie stories from New Worlds magazine, selected by editor Michael Moorcock as among that flagship of the New Wave's best, all by writers whose work I have never before read.  Let's go! 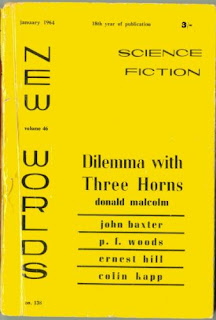 I shouldn't try to predict or promise things on this blog because I can't tell what I am going to do from one day to the next. I feel like a dozen times I've said, "I plan to read this soon," only to get distracted by some dozen other books and forget all about my "plans."  When I read a bunch of stories from Best SF Stories from New Worlds 4 back in July I said that I was skipping the Bayley story therein because I wanted to accumulate enough Bayley stories to read three or four at once and do a single author blog post about him.  But I recently became curious about his work, and having only two Bayley stories to hand, decided to read them today as part of this New Worlds post.

(Joachim Boaz has written quite a bit about Bayley's work; check out what he has to say here.  Tarbandu read a Bayley novel in 2015 and had good things to say about it.)

In the universe depicted in "The Countenance" the Cold War lasted until 2150 and the Soviet Union won!  Talk about a horror story!  For the two centuries since then, human society's guiding principle has been "Scientocratic Communism" and its rulers the elite caste of "scientocrats."

This is a philosophical story.  Our main characters are Brian and Mercer, childhood friends who meet by chance on an interstellar passenger ship after ten years of separation.  Brian is an oddball who doesn't fit in, is a little skeptical of the scientocrats and their philosophy (Scientocratic Communism bases "science on the Control of Nature by Man") and is always worrying over such philosophical problems as epistemology ("How was anything known?")

Brian becomes intrigued by the fact that the ship has no viewports looking out onto space, only TV screens.  Are the scientocrats keeping something from the people?  He starts sneaking around the outermost corridors of the ship, finds a bolted shut aperture, and opens it up to look upon the universe with his naked eyes.  The sight shatters his brain and kills him.  The ship's captain (a scientocrat, like all ship's officers) tells Mercer that this happens to anybody who looks out at interstellar space.

"The Countenance" is like a Golden Age SF story about space travel and the search for knowledge, but it turns optimistic sense of wonder stories like Robert Heinlein's famous "Universe" on their heads; like an H. P. Lovecraft story it is pessimistic, arguing that knowledge is bad for you.

"The Countenance" also reminded me a bit of Games Workshop's Warhammer 40,000 universe (I have Games Workshop on the brain lately, because I have been playing lots of Blood Bowl: Legendary Edition): a tyrannical government stands between the people and outer space because outer space is a hell which will destroy your mind!   Maybe Bayley was an influence on the GW people?  I see on isfdb that Bayley, from 1998 to 2000, wrote five stories in the WH40K setting.

I like the plot and ideas of the story, especially the idea that the sight of outer space is psychologically overwhelming, an idea I've seen a few other places (unfortunately the only title coming to mind is James White's "The Lights Outside the Windows.")  The style seems a little clunky, amateurish, but I am willing to forgive.  Thumbs up! 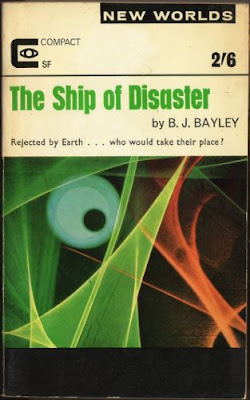 "The Ship of Disaster" reminds me of some of Michael Moorcock's Eternal Champion books, in which the ancient and sophisticated civilization of the elves (known as Melniboneans or Eldren in Moorcock's books) is collapsing under the pressure of the rise of brutish but vital humanity.  In Bayley's story an elf warship, its oars manned by troll galley slaves, searches the ocean for human vessels to destroy, its crew burning for revenge after their home port was destroyed.  A human merchant ship is sunk and one of its crew captured (the rest are mercilessly burned.)

The elf ship, lost in mist, sails into a ghost world of phantoms showing the future of the Earth.  The ghost images make it clear that in the future there will be no elves or trolls, only humans, and the humans will build vast cities and tremendous ships that will dwarf the achievements of the haughty elves.  The human captive is tossed overboard, where he finds himself transported back to his own dimension, safe, and bearing knowledge of the heroic future that awaits mankind.

No big deal, but entertaining.

"The Singular Quest of Martin Borg" by George Collyn (1965) 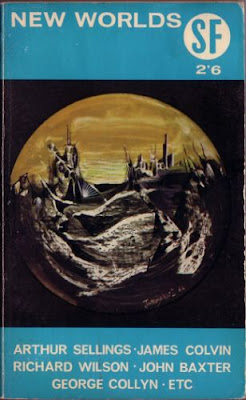 This story was included in Judith Merrill's England Swings SF, the famous anthology which we are told did so much to bring attention to the New Wave.  (Back in June I read a few stories from England Swings SF, you may recall.)  Collyn has ten short fiction credits at isfdb.

This is a joke story (maybe it is a parody of a Van Vogt story?), silly and cynical, presenting a sordid view of interstellar civilization.  There are interstellar dope pushers, a planet whose economy depends on sextourism, a mining planet where indentured servants are worked to death, and an asteroid where a pair of neglectful parents leave their offspring to be raised by reprogrammed second-hand veterinary droids.

A drug dealer and a gold-digging adventuress (maybe we should see her as a courtesan) meet on a freezing cold planet (we get a joke about how the courtesan is uncomfortable because she never wears more than a G-string), have a brief relationship and produce a child whom they leave in the care of the aforementioned veterinary robots.  The child's mother is killed in some kind of accident, so she never returns to the lonely asteroid to recalibrate the robots, so they treat her son (the Martin Borg of the title) like an infant, changing his diaper and feeding him formula for twenty-five years!  He gets rescued by bleeding heart do-gooders, who smother him with pity and condescension and prove more interested in using him in their grandstanding publicity campaigns than in actually helping him.  Luckily, his bizarre upbringing has fostered the development of tremendous psychic powers (!) and he teleports back to the asteroid and the veterinary robots.

The robots show Martin a photo of his mother, the beautiful courtesan, and he uses his mental powers to change his body, turning himself into a simulacra of his mother! Somehow he gets his mother's memories (this story doesn't make sense) and follows a career like hers on a pleasure planet, first as a dancer and then as a high class prostitute serving the richest and most powerful of the galaxy's men. Decades into Martin(a)'s career of prostitution the galaxy's red light district is conquered by the space fleet of a dictator who is expanding his empire.  He rapes and murders all the space prostitutes but when he gets to Martin(a) he dies of shock--the dictator is the drug dealer, Martin's father!  Martin moves his mind into his father's body and rules the space empire until he is bored.  Then he tries to use his psychic powers to tinker with the stars, only to arouse the ire of the soul of the universe! The "Cosmic Mind" overwhelms Martin and alters history to end all this evil dictator business; Martin's parents in this revamped universe are decent people with a stable marriage who have a normal son.

"The Singular Quest of Martin Borg" is absurd in its design and tedious in its execution, and feels very very long.  Bad!

"The Transfinite Choice" by David Masson (1966) 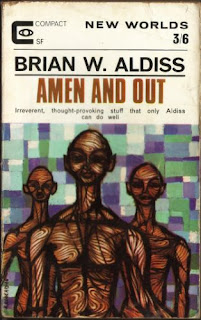 Naverson Builth is a scientist working at a "five-mile linear accelerator" in 1972.  There is some kind of accident ("trouble in subquark domain" is suspected) and he is transported to the year 2346.

2346 is a totalitarian nightmare due to overpopulation.  Most people live in tiny government-assigned apartments in vast warrens that cover almost all land mass, where they watch TV and eat algae goop.  Luckily (for Builth), the cognitive elite, into which Builth is ushered, has some more greater degree of freedom.  Builth works on a method of teleporting masses of people to other dimensions ("shunting") to relieve the population pressure.  At first this seems to work, and thousands of shunters are built and hundreds of millions of colonists are sent to other dimensions.  Then we get our Twilight Zone-style ending--the Earths of those other dimensions aren't uninhabited as was hoped, but just as crowded as Builth's own!  Those other Earths have also developed shunters and are sending just as many colonists to Builth's Earth as he is sending to them!  Only plague and inter-dimensional war can solve the population crisis!

Much of this story consists of complicated scientific conversations in the streamlined English of the 24th century, an English with fewer articles, verbs, and prepositions. This was irritating to read--I promise to never again take the words "a," "the" and "to" for granted!

The plot of "The Transfinite Choice" is OK (though iffy), but the execution is too annoying and boring.  Marginal thumbs down.  (Masson, however, deserves recognition for his unprecedented enthusiasm in the use of the word "quark.")

Bayley's stories are good enough that I am not put off reading more of his work, but I feel I need never read a Collyn or Masson story again; their stories are not bad in a garish or amusing way, but in a frustrating and mind-numbing way.  Why did Moorcock and others, like Merrill, think highly of them?  Maybe their irreverence, misanthropy and pessimism fit a 1960s zeitgeist and suited an agenda that saw a need to shake up the SF establishment.  But while a talented writer like Thomas Disch (in 334, Camp Concentration or On Wings of Song, for example) can make irreverence, misanthropy and pessimism work, the Masson story is hobbled by poor technique and foolish artistic choices and the Collyn is just a dumb stunt.

In our next episode SF stories from 1974; any bets on whether we will see more dumb stunts?
Posted by MPorcius at 10:31 AM