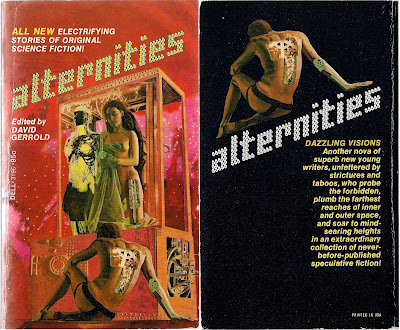 The back cover text of Alternities ("DAZZLING VISIONS...unfettered by strictures and taboos..probe the forbidden...."), and the titles of the included stories (e. g., "Hung Like an Elephant" and "Womb with a View") made me think the anthology, published in 1974 and edited by David Gerrold (associate editor, Stephen Goldin), was part and parcel of the New Wave.  But Gerrold's intro makes me wonder if it is a blow struck against the New Wave:


Science fiction has been standing neck-deep in bullshit for so long....Science fiction used to be fun.  Now it's become "important," with all the resultant literary in-breeding and incestuos navel-studying that implies.  Too many writers have forgotten their responsibility to first and foremost tell a good story, worth the reader's time and money....I want science fiction to be fun again....The goal of this editor is to provide a place for stories that I believe are worth reading because they're "fun" in one way or another. 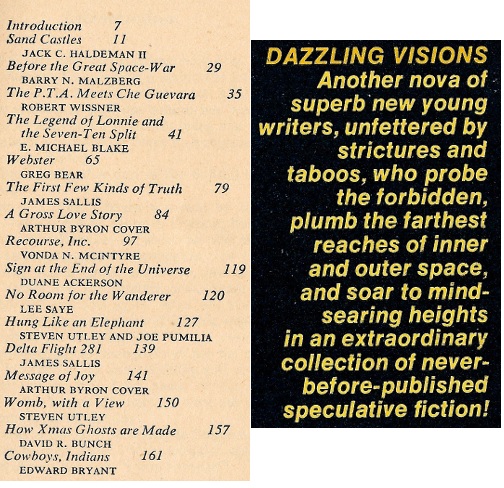 In this intro Gerrold seems to be calling out (though not by name) Golden Age writers L. Ron Hubbard and Robert A. Heinlein for acting and/or being treated like gurus:


Being able to tell a story--no matter how well--doesn't automatically qualify a man as a magician.  (Oh hell, we really are the special dreamers, but "special dreamers" shouldn't be capitalized and turned into a religion.  That way leads only to Scientology and Terminal Grokking.)

More subtly, I think Gerrold criticizes Harlan Ellison, who likes to write long intros to stories in anthologies he edits:


The stories [in this book] speak for themselves, which is why I have specifically avoided introductions at the beginning of each one.  That's one of the places where the bullshit quotient is highest.

It makes sense for Gerrold and Goldin to be the editors of such a volume, as, while they both have agendas that are evident in their fiction (advocacy for social acceptance of homosexuality in Gerrold's fiction and hostility to religion in Goldin's), both are strongly influenced by Golden Age SF (Gerrold's War Against the Chtorr books reminded me alot of Heinlein's juveniles and Starship Troopers, and his Yesterday's Children was reminiscent of van Vogt's Voyage of the Space Beagle; Goldin has worked with and in the style of E. E. "Doc" Smith) and their novels (that I have read, at least) are primarily entertaining adventure stories.

(I wrote about Gerrold's celebration of dinosaurs, laser guns and gore, Deathbeast, in 2013.  This year I wrote about Goldin's Assault on the Gods.  Joachim Boaz reviewed Yesterday's Children in 2014; in the comments to his review we discuss the radical differences between the original edition of the novel and the revised one.)

Gerrold's intriguing introduction to the volume has me wondering what Alternities has in store for us.  Let's check out some of the stories; in this post we'll look at contributions by people we've read before: Barry Malzberg, David R. Bunch, Edward Bryant and James Sallis.

"Before the Great Space-War" by Barry N. Malzberg

ATTENTION!  Calling all Barry Malzberg completists!  If isfdb is to be believed, "Before the Great Space-War" has appeared in one and only one publication, right here in Alternities.  Order your copy today!

"Before the Great Space-War"'s six-pages consist of messages sent back and forth between an invasion force and HQ.  First we have messages from Interstellar Scout Wilson, who is making friends with primitive natives on some planet, learning about them in preparation for the invasion.  The natives have invited Wilson to a mysterious ceremony, and HQ insists that he accept the invitation, but Wilson is reluctant.  Perhaps fearing that he will be relegated to the "basket of deplorables," Wilson assures HQ that "it is not, not xenophobia which makes me reluctant to participate in the Ceremony of Hinges but merely a certain shy reluctance...."  Later messages indicate Wilson has gone native--he vows to join the locals in resisting the invasion force.  The final communications, to and from the commander of the invasion force, suggest that the entire fleet has been suborned and seduced by the natives, who are cannibals and hope to entice down colonists to serve as the meal at the next ceremony.  Presumably the space war of the title is between the now-cannibalistic spacemen and a fleet sent to rescue or destroy them.

Trifling perhaps, but the style is the classic Malzberg we fans are used to and so "Before the Great Space-War" is an acceptable entertainment.

"How Xmas Ghosts are Made" by David R. Bunch

This story is four pages long and is perhaps the kind of thing that "breaks taboos" in its irreverent attack on America's bourgeois society and its rituals and mores.

A married couple with two young children (three and four) is out Christmas shopping.  Bunch stresses that the mother wears expensive clothes, perhaps trying to excite the reader's supposed envy of the rich, or just lampoon the pretensions of American consumers.  In an ironic deadpan Bunch describes how Mom slips in the snow and is run over by public busses trying desperately to keep to their schedules.  Mama is torn in half by the machines as husband and children watch; the pieces are then carried away by the wheels of the vehicles so that the woman has simply vanished without trace.  Right before she is killed Mom is thinking of suing somebody for causing her fall, a means of defraying the cost of all those Christmas presents.  (Bunch never spells out "Christmas," it is always "Xmas," like ten times.)  A drunken Irish cop is no help and Papa can find no witnesses; in the coming years Papa and kids embrace the fiction that Mom abandoned them.

If you haven't heard enough that Christmas is too commercialized and people these days are in too much of a hurry and Americans are too selfish and materialistic and litigious and religion has become a pro forma scam and the government is a callous and incompetent racket, well, here is your chance to hear it again. The style is alright and at only four pages this thing doesn't overstay its welcome, so I guess I can award "How Xmas Ghosts are Made" the coveted grade of "acceptable."

Like Malzberg's "Before the Great Space-War," Bunch's "How Xmas Ghosts are Made" seems to have appeared only in this volume; Alternities is shaping up to be a must-buy for all you fans of short wacky misanthropic trifles.

(Back in 2014 I read other Bunch stories about how crummy American society is and about people getting run over.  Apparently in 1974 Bunch really had hit and run accidents on his mind.)

This is the third story from Alternities that has never appeared anywhere else, but the first which I can't dismiss as a trifle; Bryant really tries to construct a provocative and believable alternate reality here.  "Cowboys, Indians" depicts a United States onto which a sort of Vietnam War template has been placed--the country bubbles with revolutionary fervor, while Canada (!) and Communist Vietnam send agents and commandos to infiltrate the USA as part of their covert war on America.

Our narrator is a young rancher from Wyoming.  At college he got radicalized by smoking weed and reading Marxist texts; this story includes flashbacks to his youth (episodes illustrating how violent and racist people in general or maybe just Americans in particular are) but primarily describes a raid on a government facility in which he participated.  The raid team includes a Vietnamese agent (his eyes altered so he can pass for a Mexican laborer), a female Canadian "exfiltration expert" equipped with electronic jamming devices, and another American radical.  Their mission is to sneak into a fortified lab in the countryside (where an addictive birth-control drug is being developed for use in the effort to limit the fecundity of urban blacks) and rescue a scientist (an expert on steroids) being held there against her will.  The scientist will be extracted via a Harrier jet that revolutionaries have stolen from the USMC!

The raid is a disaster; not only do some of the team members get killed, but the steroid scientist has been used as a guinea pig by the government researchers: "She was no longer a woman, and I didn't know what she was."  The narrator escapes with his life and abandons the cause of revolution.

"The First Few Kinds of Truth" by James Sallis

I've read two stories by James Sallis before, "The Field" from Quark/3, which I gave a thumbs down to, and "Tissue" from Dangerous Visions, which I thought was more worthwhile.

"The First Few Kinds of Truth" is a sort of four-page literary experiment in which the narrator describes his wife walking down a street barefoot, watched by five men, as she collects mail and steps on an earthworm which has died on the pavement.  We hear about the wife's thoughts (she is an artist) and get to read a piece of her mail and hear a pitch for her husband's idea for a stage play based on this walk.

I can't recommend this. Sallis's second story in the anthology is just two pages.  It describes a dream or maybe just a load of nonsense in the first-person.  The narrator takes a flight to the city where a friend lives, and along the way there are visions of warfare, cannibalism, and crime.  The narrator gets on the plane never having considered writing a novel before, but during the flight he becomes a best-selling novelist.

I can't recommend this, either.

Both "The First Few Kinds of Truth" and "Delta Flight 281" would show up in the 1995 collection of Sallis's work entitled Limits of the Sensible World.

Despite Gerrold's complaint that SF writers have "forgotten their responsibility to first and foremost tell a good story, worth the reader's time and money," this anthology appears to be full of stories with thin or nonexistent plots and little or no characterization, stories which would only appeal to a very small market.  The Malzberg, Bunch and Sallis stories are what I would expect from them, but they seem to go against the sensibilities Gerrold propounds in his intro.  Very strange.

(Bryant's work seems to actually try to fulfill Gerrold's mission, and it is the most successful of the stories we read today.)

There are 16 stories in Alternities, which leaves 11 to go.  We'll look at about half of those in our next episode.
Posted by MPorcius at 12:13 AM