The Mindwarpers by Eric Frank Russell

A few weeks ago he'd never have believed himself capable of taking sadistic pleasure in trying to strangle someone.  But that was what he was doing right now.... 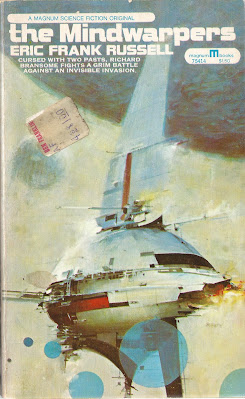 Let's read another thrift store find!  In late 2021, in a Cumberland, MD thrift store that smelled pretty terrible, I bought a 1975 printing of Englishman Eric Frank Russell's The Mindwarpers, a paperback with a cover by John Berkey.  Presumably the cover and the low low price were what enticed me, because I don't think it could have been my experience with Russell: a year earlier I had read Men, Martians and Machines, Russell's collection of stories about the crew of the starship Marathon, and found it to be "barely acceptable," and in 2016 I had read The Best of Eric Frank Russell and had a similar lukewarm reaction.  Or maybe I had just forgotten who Eric Frank Russell was, perhaps mixing him up with Raymond F. Jones or John Russell Fearn.  I am constantly mixing people up; all my life I have mixed up Brad Pitt and Val Kilmer, and it was only a few days ago that my wife told me that the woman I have for years been calling Vanessa Redgrave is in fact Maggie Smith.

The novel known here in America as The Mindwarpers was first published in hardcover in Britain in 1964 under the more literary title With a Strange Device.  The novel has been reprinted multiple times not only in the US and UK, but also in Germany and Italy, so I guess we can call it an international success.  But will it be a success here at MPorcius Fiction Log HQ?  That is what we are about to find out!

The Mindwarpers begins with a jocular description of the physical impregnability of a government research center--the people employed there call it "the defense plant"--in some unnamed US city: its thick walls, its three layers of checkpoints manned by very suspicious guards, its strictly enforced hierarchy based on staff member's clearance levels, etc.  But, Russell tells us, the fortress has a weakness!  The human element!  Via scenes of dialogue among various scientists and administrators we learn that over the past few years an increasing number of scientists have been unexpectedly quitting and then disappearing to remote areas of the country or even outside the United States. 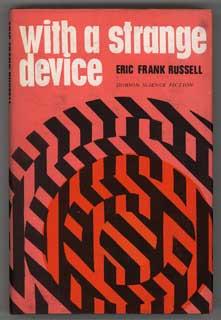 From among the indistinguishable and personality-free cast one man, Rich Bransome, a metallurgist with a wife and kids who is on a team developing an anti-aircraft gun, emerges as our main character.  During his daily commute between the plant in town and his home in the suburbs, while waiting for his connecting train, Bransome overhears two men talking; one of them gossips about how the police have, by chance, found the bones of a woman.  Bransome is shaken--it is he who murdered that woman and buried her body twenty years ago!

The rest of the novel consists of crime drama stuff.  Bransome is wracked by fears the cops are on his trail!  Bransome feels that somebody is following him!  Bransome alters his routines in hopes of throwing off possible pursuers, like sitting in a different train car than usual and walking past his house before doubling back to it!  Bransome's family and his colleagues at the plant notice how anxious he is and ask him why!  After a few days of all this tension, Bransome skips town, telling his bosses he has to visit a relative in trouble and telling his wife he has to go on a business trip; traveling around, he pores over old newspapers and slyly interrogates people, looking for clues, and gets the jump on a guy who is following him and ties him up!

Russell handles all this detective fiction stuff competently enough, but we know the American title of the novel, and the actual text includes sufficient hints besides, so we readers are pretty sure Bransome is not a murderer, that in fact somebody planted a false memory of being a murderer in his brain as a means of neutralizing him as an asset at the research center.  The real mystery is who did this.  Space aliens?  (There is a space ship on the cover of the book, after all.)  The commies?  (This is the logical answer.)  A mad scientist?  (Those of us who love mad scientists cherish the hope!) 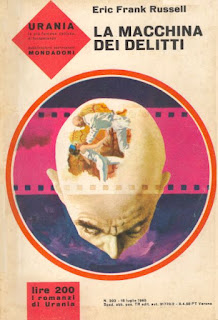 The police capture Bransome at the book's halfway point (this edition is 158 pages) and hand him over to a guy from Washington, a military counterintelligence officer.  Talking to this spook, Bransome realizes he is not being followed because state or local cops suspect him of a murder, but because the federal government suspects an unnamed foreign power is somehow getting at the American defense establishment's top scientists and pressuring them to leave their posts, and the feds hope to help Bransome escape such pressure and to put an end to this enemy campaign.

Bransome escapes from the counterspy and with the new clues he has gleaned from conversation with him pursues his personal amateur investigation on new lines; by page 100 or so he is quite convinced his memories of slaying a woman are fake and all the researchers who have abandoned their defense sector jobs recently have had similar fake memories forced upon them.  More detective work (stake outs, asking questions of people) leads him to the hideout of the gang that has been giving false memories to all these eggheads; impulsively he invades the enemy HQ all by himself, but the authorities, who have been following Bransome without alerting him of the fact, are right behind him and they capture the foreign gang; there follows a few pages in which we learn the memory-tampering techniques used by these enemy agents. 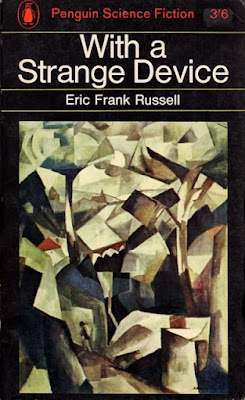 The Mindwarpers, despite the space craft on the cover and the fact that Bransome is a scientist, is only just barely an SF story; it is a mainstream thriller that just uses high tech stuff to get the detective and chase plot rolling.  I'm going to call The Mindwarpers acceptable--while not bad, there is nothing in the book that grabs the reader, that inspires emotional or intellectual commitment.  The detective stuff more or less works on a mechanical level, but there is little suspense or excitement.  Bransome is not an interesting or attractive character whom we care about.  There is no sense of time or place--we never are told what states or cities the story takes place in, nor what country the enemies are working form, and locations are never described in any way; I guess this is in part because Russell is not familiar with the United States (he has the counterspy use the word "constitution" the way an Englishman would use it, as a lower case reference to the traditional political establishment, rather than as an American does, in uppercase, as a reference to a specific document that sets forth particular laws.)  This book would be much better if Russell had set it in England or some other place with which he was familiar and brought the setting to vivid life, and if the characters--Bransome and colleagues as well as the enemies--came from a specific cultural milieu or political ideology.  The Mindwarpers has almost no philosophical or ideological content; Russell doesn't try to say anything about bureaucracy or the scientific mind or the strengths and weaknesses of a free or a totalitarian society, even though the topic and plot provide a perfect canvas upon which to do such things.  As the epigraph I chose for this blog post suggests, he does offer a minor psychological/philosophical theme, the idea that the fear of death or a desire for revenge can motivate a person to do things he wouldn't normally do, but he could have done much more on this theme and on any number of others.

Lester del Rey's introduction to The Best of Eric Frank Russell and the wikipedia page on Russell indicate he has a high reputation and make him sound like a guy whose work I should really like, but in practice I find him somewhat underwhelming.

Email ThisBlogThis!Share to TwitterShare to FacebookShare to Pinterest
Labels: Russell