I haven't exactly been champing at the bit to read Eric Frank Russell stories because when I read his famous and widely anthologized "...And Then There Were None" I thought it was a long and tedious exercise in smart alecky utopianism.  But when I saw the 1978 collection The Best of Eric Frank Russell I decided to give Russell another shot. 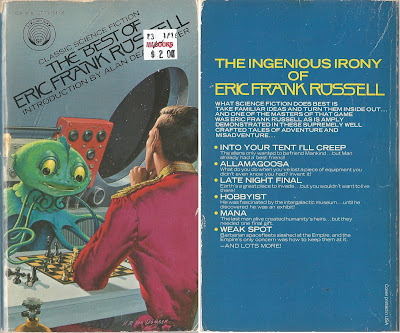 Alan Dean Foster (of movie tie-in fame), in his introduction to this volume, tells us that Russell is his favorite SF author, and, more surprisingly, that Russell was John W. Campbell's favorite SF author!  Campbell, the editor of Astounding who worked closely with those titans Heinlein and Asimov, said Russell was his favorite SF writer? I suppose that is reason enough for someone interested in classic SF to read Russell. Let's start with the first three tales in the book, all of which appeared in Campbell's Astounding. 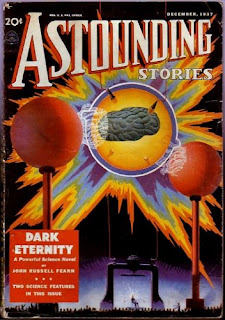 Omega is the last man on Earth.  It is the far future, when men have evolved into immortal beings who can use their mental powers to effortlessly fly.  People only die when they have achieved all their goals, achieved satiety, and Omega, six thousand years old, is the only man who has not yet achieved satisfaction.

Omega's quest is to inspire intelligence ("mana") in ants!  He finally accomplishes this by shooting a ray through his own brain at a terrarium full of ants.  When he has done this enough, the ants figure out how to start fires and shoot a bow and arrow!  No doubt, Omega reasons, a million or whatever years ago space aliens gave the human race intelligence in a similar way (isn't this the premise behind 2001: A Space Odyssey?) His work done, Omega releases the ants and then flies up into space, to commit suicide.  The ant civilization that is to come (barring some kind of catastrophic anteater attack, I suppose) will be Omega's monument, and the monument to the achievements of the human race.

A tight five pages, with an interesting idea, numerous memorable images, and a good writing style; this one gets the MPorcius Seal of Approval. 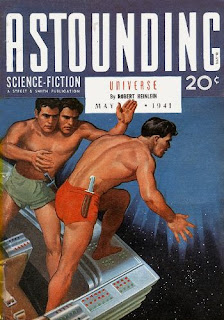 In the 23rd century a space ship gets hit by a small asteroid, and the multiracial crew finds they are hurtling towards the sun!  While the rest of the crew takes cover in the most heavily shielded part of the vessel, expert pilot Jay Score stays in the searing hot cockpit, steering the ship on a one in ten thousand chance course past old Sol.  The ship makes it, but poor Jay is burnt within an inch of his life!  Thankfully, back on Earth he becomes the first ever man to have his brain put in a robot body!

The thing about this competent but basically routine story that will stick out to 21st-century readers is how it addresses the issue of race. Russell uses the story to promote racial harmony and the idea that different people's different abilities can complement each other (he is "celebrating diversity" in today's argot) but the way he does it, focusing on fanciful biological differences between ethnic groups instead of on human equality, would at best be considered "problematic" by today's cultural arbiters, and at worst it would be career suicide.

On the first page of the story we are told that, since white people invented space drives, only white people are ever hired as engineers on space ships--whites "know most about them [rockets] and can nurse them like nobody else."  This doesn't really make much sense; maybe it is an appeal to the idea of "racial memory?"  The special ability Russell assigns to black people is approximately as silly: "All ship's surgeons are black Terrestrials because for some reason none can explain no Negro gets gravity-bends or space nausea."

Anyway, the white engineers, the black doctor, and the crew's tentacled Martians (who need less oxygen than humans and can better stand extremes of heat) all contribute to the ship's and the crew's survival.  Presumably it is significant that hero Jay is "neither black nor white;" whether this means he is biracial or an Asian or Native American is unclear.
[UPDATE DECEMBER 12, 2020: On rereading "Jay Score" four years later I find it seems I misunderstood the story's twist ending.  I thought Jay Score was a heroic man of indeterminate ethnicity who sacrificed his body to save the ship and his comrades, and at the end of the story had his brain installed in a robot body.  In fact, Russell just wants you to think that Jay Score is a man of superior physical and mental fortitude until the kicker at the end of his story--the twist ending is that Jay Score was a robot all along, the twentieth of the J-series of robots.  Tricky!]

Russell's pacing and style are good, and he makes the Martians interesting (they love chess, for one thing--the cover of this collection illustrates "Jay Score") and I have a weakness for stories about space travel, so I'm giving this one a thumbs up. 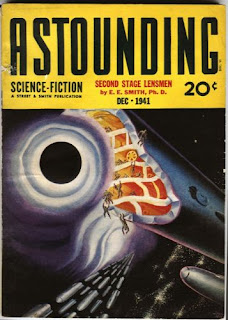 This is a nonsensical joke story whose payoff doesn't justify the long set-up.

Fifteen or more years ago a cure for cancer was discovered on Mars!  So human businesspeople flock to native Martian settlements to buy it.  Instead of using spacecraft or aircraft to go to the Martian towns, Earth merchants ride Earth camels across the spider-infested deserts between the spaceport and the native settlements. (Russell repeatedly tells us that this is because there is no gasoline on Mars.)  Our story follows one such camelback journey.

The native Martians can't talk, so trade is conducted via hand signals and pictures (the natives build up credit and point to what they want in illustrated Earth catalogs.)  One of the Martians invites one of the human merchants to his home--the human is amazed to find that the Martian has used Earth parts to build a device which allows him to talk!  It has taken over fifteen years of contact for the first Earthling-Martian conversation to take place, and we are there to witness it!

The native Marsplains that his race lost the ability to talk because they developed telepathy.  He opines that only primitive types speak; advanced species like Martians and camels communicate via telepathy.  When the human scoffs at the idea that camels are superior to humans, the Martian tells him that camels don't wear clothes or pay taxes--obviously their lives are better than those of a human.  The denouement of the story involves the human experimenting and confirming that the camels can indeed read his mind.

These stories, taken as a group, are good enough that we'll be seeing three or four more selections from 1978's The Best of Eric Frank Russell in our next episode.
Posted by MPorcius at 8:44 PM