They were dead, the cyberneticists said from the beginning.  The activation of the neurons was no more than the jerking of a dead frog leg by an electric current....But they couldn't know; no one could tell them. The mute prisoners of darkness could never tell.  They could only live--and hope for death. 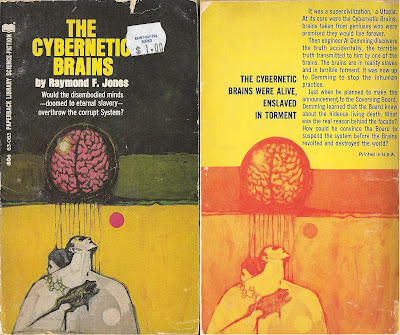 How do I love this cover?  Let me count the ways.

I love the huge brain.

I love the monster frog.

I love the male and female profiles, which the artist (most likely Jerome Podwil, though some have claimed it is Richard Powers' work) imbues with a sort of iconic, essential humanity.  Here we see Everyman and Everywoman, together facing an indifferent universe.

And the colors, the width of the lines, etc.  I love it all!  But will I love Jones' novel?  In 1950 Raymond F. Jones contributed to Startling Stories a tale entitled "The Cybernetic Brains," and in 1962 an expanded version was printed in a magazine in Italy and in book form here in the good ol' U S of A.  My copy is a 1969 paperback, 128 pages, from the Paperback Library.  I recognize Jones' name, but I don't think I have ever read anything by him, at least not as an adult, so here I'm getting a first taste of his rather extensive body of work (isfdb lists over a dozen novels and many stories ranging from the early 1940s to the late 1970s.)

The Cybernetic Brains begins in darkness.  That's because chemist John Wilkins, whose body was destroyed in a car crash  along with that of his newlywed wife Martha while they were on their honeymoon (damn!) is a disembodied brain and they haven't hooked him up to the cameras yet!  Jones gives us a very effective description of what it is like to be a disembodied brain that really catches the reader's attention before we get the background exposition about the novel's future setting.

The Wilkins' world is a sort of socialist utopia, which Jones calls "the Welfare State" with caps.  Automatic factories run by computers produce everything anybody could possibly need, so only a tiny minority of ambitious and power-hungry people actually have jobs--everybody else just hangs out. The computers distribute everything--most people don't even know what the word "profit" means, the concept of business being so antiquated--and there is no crime because everybody has what he wants and psychopaths are euthanized at birth.

Where do the powers that be get computers with enough memory and processing power to manage the entire world economy?  Well, they use the brains of dead people as their computers!  The brains of the most intelligent and well-educated citizens killed in accidents (are they really accidents?) that (conveniently) left their noggins unharmed!  The cyberneticists who harvest, install, and maintain these dead brains don't realize (or do they?) that their process revivifies the consciousness of the people from whose skulls the brains have been extracted, so that two million human souls, for decade after decade, are living in an agony of sensory deprivation, just so the average man can sit on his ass all day!  I guess you could say they are using the brains as hardware, thinking the original software is gone, but it isn't gone!

John and Martha, as leading chemists, have been installed in a vast chemical plant. (The cyberneticists find that the dead brain computers work most efficiently when managing processes with which they were familiar in life.)  The disembodied newlyweds barely succeed in maintaining their sanity and then vow to do all they can to liberate the two million enslaved souls that are running the world economy!  Why haven't any of those two million ever rebelled?  We later learn that a slight tweaking of the revivification process has given John and Martha super-IQs, while the other two million are totally insane, schizos who have retreated into sterile dream worlds.

With their super IQs, John and Martha, in vats in unmonitored parts of the labyrinthine chemical factory, create little creatures they call "frogs" that transmit telepathic signals and act as their eyes and ears.  With practice, they graduate to creating human bodies that can walk undetected among real humans.  Through intermediaries--their family and friends--they alert the government and the Cybernetics Board that the brains are alive and the whole brain computer program should be suspended.  The authorities respond by trying to assassinate John and Martha's loved ones, leading to gory fights between the assassins and the frogs!  (Frog 2.0 has lots of sharp teeth!)  Next, John and Martha try to alert the people, thinking the common man will want to liberate the two million brain slaves.  Think again, naive boffins!  When the common man learns there is a threat to his cushy lifestyle he rises up against, not the slavers, but John and Martha's loved ones!  More gory fights, this time unruly mob vs toothy artificial frog! 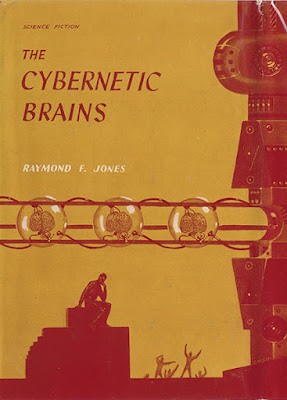 I kept expecting a sense-of-wonder ending, with John and Martha winning over the populace through some stratagem and liberating the brains and creating a better world, or at least putting their own brains in new bodies and blasting off to live together forever in outer space, but Jones is writing a tragedy here.  As the novel ends the brains catastrophically cease production (chemical plant emitting poison gas, atomic plant exploding, etc.) and expire and world society, consisting of people who have never done any labor and don't know how to do anything productive, collapses into total anarchy.

Jones's novel has lots of cool disembodied brain, artificial creature, and high-IQ science-fiction stuff, and lots of human relationship stuff and psychological stuff in which people suffer breakdowns as they doubt they can go on after their significant other has gotten killed, but the real point of The Cybernetic Brains is to attack the cradle-to-grave welfare state.  The foundation of the welfare state is slavery, and it corrupts, infantalizes, emasculates, and dehumanizes everyone connected to it.  Jones' intelligent or admirable characters denounce it repeatedly in no uncertain terms, for example, suggesting that the welfare state represents man refusing to achieve maturity (by conquering the stars, say) and instead "returning to the womb."

All the SF elements are fun, the ending took me by surprise, I love stories about shifting brains and consciousnesses, and I still, after all these years, find debates over the role of the state compelling, so I quite enjoyed The Cybernetic Brains.  Probably some of the scenes, like John and Martha's grief-stricken sister-in-law standing naked atop a wall with a raging inferno behind her and a murderous mob before her, are a little melodramatic, a little too operatic or cinematic, but I don't think those few scenes sink the whole enterprise.  I can definitely recommend this one, especially if you are into van Vogt-style high IQ and conspiracy stories, and anti-socialist polemics.

And another word of praise for Jerome Podwil for producing not only a gorgeous cover, but one which is an accurate representation of everything that happens in the book!
Posted by MPorcius at 12:48 PM