OK, this is one of those books I bought because of the cover, an evocative piece by Jerome Podwil which includes so many of my favorite things--a city (can we hope New York City?) skyline, some kind of space ship/fighter plane, and a hideous titanic monster in the crosshairs of the viewer's advanced weapons system.  Looks awesome!

As the cover of my 1969 paperback admits, Terror on Planet Ionus was titled Mach 1 when it first appeared in 1957.  I would never have bought a book called Mach 1, because it sounds like the title of a conventional novel about a test pilot, the kind of thing in which his wife doesn't understand his addiction to adrenaline and he is in trouble with the brass for insulting some overly-fastidious bureaucrat who was manning a desk while he was flying a Mustang over Festung Europa, risking his tail so beatniks and pinkos had the freedom to run down this great country.  I don't want to read that kind of thing, but a dude in an X-Wing fighter dropping a bomb on Godzilla I will give a try.

The Mach 1 is a motor torpedo boat that can sail at the speed of sound!  It moves that fast so it can launch atomic torpedoes at enemy ships or drop atomic depth charges on enemy subs and get out of the blast radius before duck and cover time.  Various devices, including jet engines and a "tri-node" which projects an "electric impulse" of "occulting current" which calms the waves, make such speed possible.  (I don't know anything about boats, but if you wanted something that could move at the speed of sound and drop depth charges on Soviet submarines, wouldn't your first choice be, not a jet boat, but a jet airplane?)

Lt. Commander Jeb Curtis is a U. S. Navy veteran of the World War II Mediterranean theater, one of America's best PT boat skippers and the kind of officer who pisses off his superiors with his womanizing and his insubordinate attitude.  He has been tapped to take the Mach 1 on its first full-speed test run.  The day of the big test run there is some weird electrical activity on one of the Pacific islands on Jeb's route, so civilian scientist Martin Edmur, the inventor of the tri-node, and Lieutenant Janis Knight, beautiful Navy meteorologist, are sent to the island.  Martin and Jeb have both been trying to get into Janis' pants, Martin by being shy and polite and Jeb by just grabbing her and kissing her.  Guess who gets the girl and who gets killed in a supersonic boat crash!

Jeb, alone on the boat, sails at super speed out of San Diego and into the Pacific.  At the same time, the island where Janis and Martin are located is struck by a power outage and a strange wind that carries off Janis.  Jeb and the Mach 1 are swallowed by an alien saucer which opens and closes like a huge clam, and once inside he meets the aliens, tall handsome people with unusually-colored hair and eyes.  He discovers that these jokers have also captured Janis, providing him some alone time with the weather babe! (Like a boss, he makes Janis jealous by flirting with a hot platinum-haired chick!)

The aliens, who call themselves "the Grid," take the two Earthlings to their home world, Ionus, one of the barren moons of Saturn, where they live underground.  The Grid know Earth languages because they have picked up so many Earth broadcasts. From the US they have recorded noir films and westerns, so they think Americans are brutally violent, while from the USSR they recorded lots of propaganda broadcasts of folk music, so they think the Soviets are as peace-loving as they are.  In fact, the Grid saucer's original destination was Russia, and they only ended up in the Pacific because they decided on the spur of the moment to home in on the powerful signal transmitted from the island to Jeb in the Mach 1.

The Grid have shanghaied Jeb and Janis into service on their Earth-Ionus liaison team--these technicolor-coiffed pacifists want help from the Earth with their big problem, Karkong, the energy-devouring monster who is always attacking them.  As pacifists, the Grid refuse to take steps to kill Karkong, even though The Big K has murdered over half their population; their strategy is to feed Karkong energy in hopes he will make friends or get satiated or something.  They may have space ships, but the Grid don't know how to harness atomic energy, and so want Earth help in building a nuclear reactor; maybe their own personal Three Mile Island can generate enough energy to appease the beast.  While they are explaining this to the two naval officers, Karkong busts into the city, causing mass destruction, so Jeb and Janis and the leaders of the Grid escape in the saucer that is carrying the Mach 1, fleeing to Earth.  Karkong also grabs a saucer and follows them.  (All this Karkong action takes place "off screen," guys running in to the room to tell the Grid elite what is going on.  Jeb, Janis, and we readers have no idea what The Big K looks like at this point.)

After some scenes in which people refuse to believe Jeb's claim he was captured by aliens, and some scenes in which people refuse to believe the Grid's story about Karkong, Karkong arrives and begins marching around North America, shooting electric bolts, wiping out cities and dams and killing thousands of people in his ravenous quest for energy.  We are all curious as to what the star of the show looks like, but Karkong is essentially invisible behind his magnetic field, or whatever it is:


Observers tried to study the object with binoculars under the light of illuminating shells from the mortars.  But all they could see was a huge, pulsating shell.  It looked like an inverted bowl composed of turbulent air.  It seemed to be spinning, picking up everything that was loose, so that the agitated air could not be seen through.  Whatever it was, it was about one hundred yards in diameter and although it was only composed of air nothing--not bullets--not bombs--not armor-piercing shells--nothing would penetrate it. Another peculiar thing.  Not a single battery in any of the vehicles in the vicinity had a charge left in it.  Even flashlights would not function.

Western scientists, including Martin, try to figure out how to stop The Big K, but the Soviets go with their own strategy, dropping a nuclear bomb on Karkong while he is in the Nevada desert on his way to Hoover Dam.  Karkong enjoys his first taste of nuclear energy and looks for more.  When the American and Canadian authorities shut down all the nuclear power plants in North America, Karkong sets a course for Mother Russia, where the atomic reactors are still online. 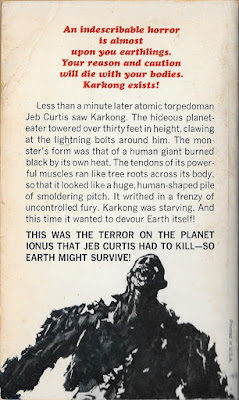 Jeb, Martin, and some minor characters chase Karkong in the Mach 1.  It has been discovered that, when Karkong discharges one of his bolts, his "inverted bowl of turbulent air" rises up a little, so the Mach 1 is able to launch one of its atomic torpedoes under the field when the Grid saucer buzzes the monster and draws Karkong's fire.  The explosion weakens Karkong, forcing the field to collapse so Jeb and we readers can finally see Karkong's true shape on the penultimate page of the novel, the description plagiarized on the book's back cover.  (Yes, the back cover text spoils what happens on page 159 of the 160-page novel.)  In his weakened state Karkong cannot absorb much energy, and so a lightning storm kills him.  Big K, we hardly knew ye!

Mach 1 is the only publication listed under Adler's name at isfdb, and the novel does feel amateurish.  Images and ideas are vague, action scenes are described in a manner either cold and detached or incoherent and confusing, generating no excitement.  There are lots of static scenes of people in offices or bunkers, talking rather than doing anything.  The way the book is plotted and structured is more reminiscent of a disaster story than a SF tale--the aliens and the technical aspects are only lightly touched upon instead of being used to present the reader with far-out thrills or speculations about alternative ways of life.  Instead of fleshing out a few important characters we might actually find interesting, Adler gives us shallow descriptions of many (too many!) ancillary figures, most of whom end up dead.  We learn almost nothing about the personality, motivations and origin of Karkong, so instead of being an engaging villain, The Big K is a flavorless force of nature, playing the role an earthquake or weather event would play in a disaster novel, posing to the overabundant Earthling and Ionian characters a test which reveals their true colors or forces them to evolve.  Unfortunately, Adler's characters all follow obvious and banal narrative arcs--Jeb, the love 'em and leave em type, overcomes his fear of commitment and surrenders to his love for Janis; Martin, the cowardly scientist overcomes his fear of danger and dies as he pulls the torpedo trigger on the Mach 1; the Grid learn that one has a right to defend oneself from evil and support the final anti-Karkong attack--and all these character evolutions are explained in the most cursory way, inspiring no interest in the reader. 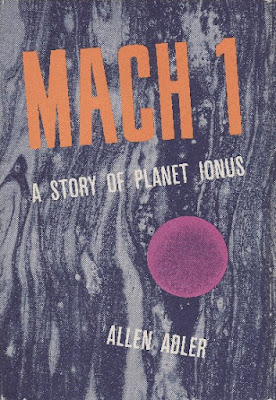 The character Adler spends the most time on, even though this guy doesn't really interact with Karkong or the Grid, is the admiral in charge of the Mach 1 program.  Answering my query of above, we learn that he is pushing a supersonic boat when a supersonic aircraft would be more logical because he wants to ensure that the Navy isn't rendered obsolete by the Air Force.  These chapters, which are largely divorced from the SF elements and in which we learn all about the admiral's career, relationships and psychology, feel like boring conventional fiction, a tragic study of a single-minded civil servant (he ends up committing suicide before he learns that his boat saves the world) and a satire of government inefficiency.  Maybe that is the kind of novel Adler really wanted to write?  My preference would have been more effort spent on developing Karkong and the Grid (if Adler was trying to write a SF novel) or on the two different love triangles (Jeb-Janis-Martin and Janis-Jeb-platinum babe) he sets up but does very little with (if he wanted to write a compelling human story.)

A poor performance with nothing to recommend it; not offensively bad, but bewilderingly limp and forgettable.

Bound in the center of my copy of Paperback Library 63-048 is an ad for De Vry Institute of Technology, including a postcard (no postage necessary!) for use by men who hate their jobs and are interested in info on careers in the electronics field. Electronics, we are assured, is where the action is in this electronic age, and there are jobs for guys like you, not just those geniuses like Martin Edmur who get killed in supersonic boat crashes! 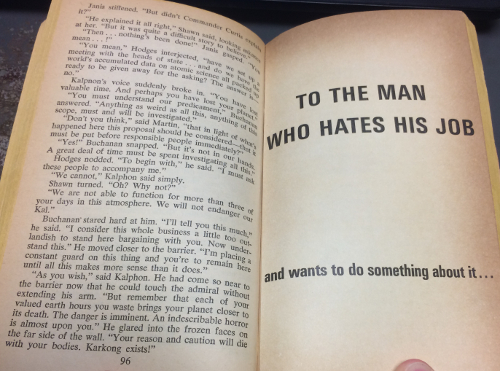 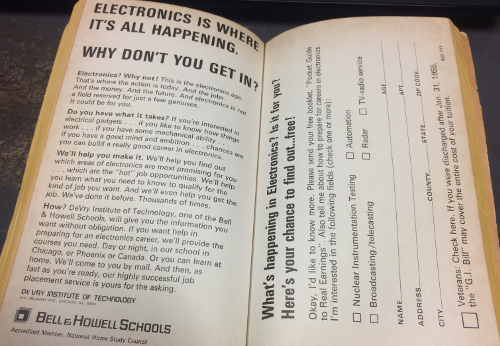