With bewilderment she said, "But you spoke to me--are speaking with me."

"In more ways than one, cupcake." 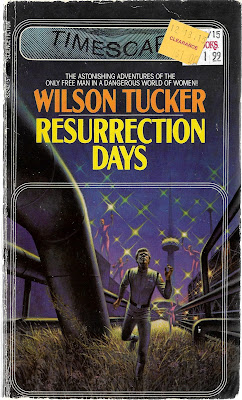 I have written some pretty harsh reviews of novels and short stories, but I'm a softie compared to my man tarbandu of the famed PorPor Books Blog.  Recently he awarded a mere one star (of five) to Wilson Tucker's 1971 revision of his 1953 novel The Time Masters.  Reading tarbandu's review reminded me that I owned a Tucker paperback myself, one from later in the writer's career titled Resurrection Days.  I had purchased it because it promised to be one of those books about how crummy it would be if the world was run by women, like Edmund Cooper's Five to Twelve, and Gender Genocide, or A. E. Van Vogt's Renaissance.  These sorts of stories have a particular appeal to me.  So let's see if Resurrection Days, first published in 1981 and (it seems) never published again (not a promising sign, is it?) is any good.

Immediately upon starting the 191-page novel I was reminded of the work of Philip Jose Farmer, especially "A Bowl Bigger than Earth," but also the famous Riverworld books.  Like the guy in Farmer's "Bowl," Resurrection Days protagonist, Owen Hall, wakes up in a conformist and totalitarian world that is sort of a parody of 20th-century life.  The world in Tucker's novel is, in some ways, very technologically advanced. There are those moving walkways we see in so much SF, and factories full of machines which can manufacture goods practically out of thin air at the direction of their operators' minds.  Press your forehead to the concave plate on the machine, think of bacon, or a necktie, or a cigar, and voila, it appears inside the machine, on the other side of  a window.  Push a button and robotic hands wrap up the item for shipping. (On the other hand, the people here lack electricity and light their way with candles and torches.)

This world is stiflingly conformist; all the houses and yards look exactly the same, and everybody wears the same clothes.  The men who commute to and from those factories each day on that moving sidewalk (the town is a perfect circle and the single slidewalk, along which are all the homes and factories, marks its perimeter and travels only one way in an endless loop) do so silently, dully staring at their feet and obeying all commands without question.  Hall calls them "zombies," (which turns out to be very appropriate.)  The women he meets are astonished to hear Owen Hall speak, and to find him disobeying women's orders.  For it is women who run this world--all the cops and managers are pink-clad women, and at the top of the organizational chart sits "the Mother," apparently far off in another town--and the mindless men never dissent.

Besides being crushingly uniform, everything in the circular town (like the male workers it has no name, only a number) is shoddy, from the bad-tasting food to the poor construction of the cookie-cutter houses--most of the zombies who make everything in the "think-and-do" machines do a pretty poor job of visualizing what they are directed to create.  "The slave labor hereabouts may be cheap and compliant, but it wasn't worth a damn when it came down to quality workmanship; somebody just wasn't fitting the man to the job," is Owen's assessment.  I thought with this Tucker was perhaps making some kind of commentary on, or perhaps influenced by knowledge of, life behind the Iron Curtain--bolstering my theory is the fact that there is no money in this world, everything being rationed and distributed by the city government from a central storage facility via tubes (these tubes are visible in the cover illustration.) 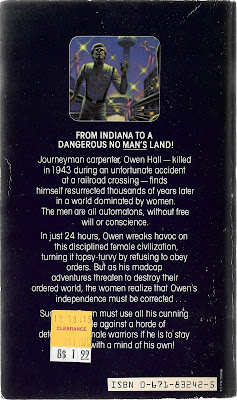 At first Hall's memories of his previous life are very cloudy, but over the course of his first day in this strange new world he gradually remembers more and more things. He is "a New Deal Democrat" and a strong supporter of FDR and labor unions, and a proud citizen of Indiana, where he worked as a carpenter.  He was killed at age 28 in a road accident when the truck he was driving slid on the icy roads in the winter of 1943 and collided with a train.  Owen wonders if the fact that he is dead indicates that he is now in heaven or hell.

At the same time Owen gradually recovers his memories, he explores and puzzles out the weird realities of the world he has found himself in.  It is the far future, the women are all the product of parthenogenesis, and the men, including Owen, are the reanimated dead (the women call them "ambulatory recoveries")! Bones are dug up from 20th-century cemeteries and the men recreated in home versions of the think-and-do machines by women.  The women are careful to not allow the men much will or memory, but the woman who put Owen back together was drunk and accidentally restored his intelligence and personality (or deliberately made him more canny because she wanted to have sex with him--sex in this world is more or less outlawed.)  Once they get wind of him, the city government wants to toss Owen back into a machine and turn him into a zombie.

Owen spends much of the book in disguise, on the run, or in hiding.  Through charm and the application of alcohol he develops relationships with two women.  When he is captured in the end of the book he is dragged before the city government for a hearing, and they decide he is so dangerous that he must be executed and reinterred. Luckily for Owen the woman in charge of the cemeteries, who is given the task of killing the pesky Indianian, is one of the women he has managed to charm.  Instead of killing him (this would have been the first killing of anybody in centuries, as there has been no war or violent crime for ages) she severs his bonds and the two of them flee to the wilderness to live happily ever after.

Resurrection Days is not very good.  Let's start with the elements I liked, however.

Most SF books are about bourgeois professionals (scientists, engineers, military officers or merchants), intellectuals, superheroes or aristocrats, so it was interesting to see a working class protagonist whose main topics of conversation include how great the New Deal and its architects are.  This portrait is not necessarily, or not wholly, a flattering one, as Tucker includes references to Democratic corruption; one example:


"The old Mother stories are true," Paoli exclaimed.  "Gods did walk the sky in ancient times."

"Are you an ancient fly-boy?"

Resurrection Days also has "meta" or self-referential elements that will please the longtime SF fan.  Owen, back in the '30s and '40s, was a dedicated reader of science and science-fiction magazines (he subscribed to the fictional Amazing Mechanics) and aspired to be a dirigible pilot.  The book is also a sub rosa celebration of Robert Heinlein.  When he first sees the moving sidewalk, Owen uses the phrase "roads must roll," a winking reference to Heinlein's 1940 short story, since inducted into the SF Hall of Fame, "The Roads Must Roll."  ("The Roads Must Roll" was the Heinlein story assigned in the class I took on science fiction at Rutgers University back in 1990.) When Owen sees the robotic hands in the think-and-do machines, Heinlein, though again not named, is referenced a second time:


Owen recognized those fingers as a form of waldoes.  They'd been invented by the same man who invented the rolling road, and both inventions were duly reported in the science-wonder magazines.

So there are these nice little touches, but as a whole Resurrection Days is weak.  It feels slow, with scenes that are too long and which don't advance the story very far. The whole tone of the novel is faintly humorous, so even though the material (death, slavery, tyranny, one man struggling against a vast system) should be exciting and suspenseful, there is no tension or fear.  Owen takes everything in stride, never losing his aggressive confidence, always cracking a joke.  The novel is brimming over with little jokes which are not funny.  Way too many of the jokes revolve around Owen's use of early 20th-century slang, which, of course, the women don't understand. You've seen these sorts of jokes on TV a billion times; a kid says "groovy" and an adult doesn't understand, a black person says "that's bad" and a white person doesn't realize "bad" means good, etc.  Again and again Owen says something like "go fly a kite" or refers to "booze" and the future-born character asks "What is booze?" or says "I don't understand you," and again and again it is neither amusing nor interesting.

Another problem is the book's theme.  I bought the book thinking it was likely a criticism of feminism or a defense of traditional gender roles.  (Over the course of this blog's life we've seen Heinlein, Leigh Brackett, and Andrew Offutt make such arguments, some subtly, some not so subtly.)  But Tucker doesn't doesn't do anything of the kind.  There is nothing particularly feminine about the town or government or even the female characters (they aren't flighty or emotional or gossipy or any of the other negative stereotypes of women, neither are they mothering or generous or any of the stereotypical virtues we associate with women), nobody gives sexist (misandrist or misogynist) speeches, it is never explained why the entire government is made up of women and why sex is outlawed or how the government, culture and economy got to be the way they are.  The Mother doesn't appear.  There isn't even a narrative reason for the gender divide in the story; the plot would work just as well if half the sentient people were men and half the zombies were women. Resurrection Days feels more like a tepid criticism of collectivism or an examination of management-labor relations than a critique of feminism or women, which was disappointing!

It wouldn't be fair to say Resurrection Days is bad, but I can't recommend it--it kind of just sits there, inspiring little intellectual or emotional excitement.  Too bad.
Posted by MPorcius at 8:59 PM