It Was the Day of the Robot by Frank Belknap Long

And how can a man take pride in his independence and proclaim that he is really free when he cannot make love to a woman, and feel her slender sweet body moving beneath him, and experience a rapture that blots out the present and the past, and makes only one moment seem eternal, as long as forever is. 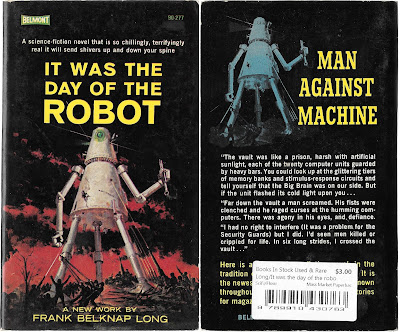 Remember when I fell in love with the cover of a paperback I found in an Iowa antique store?  It was Belmont Books of fabulous New York City that had published this unforgettable masterpiece, and the heroes at Belmont had more than one arrow in their quiver!  The cover of Novelets of Science Fiction had prehistoric reptiles, militaristic astronauts, the birth of a brilliant red star (from an egg?), and a green-skinned alien fashion model with two big beautiful...eh, wings.  But what iconic component of science fiction was it missing?  A robot!  Well, Belmont has the crucial robotic-American demographic covered with the terrific illustration adorning the cover of 1963's It Was the Day of the Robot.  I've wanted to own this beauty for quite a while, having seen scans of it online, and was pretty stoked (that's what the kids say nowadays) to discover it in Wooster, Ohio recently.

Written by Frank Belknap Long, an intimate friend of H. P. Lovecraft and a famous writer whose high reputation, to be frank, I have found to be a little mystifying, It Was the Day of the Robot is an expansion of Long's 1957 story "Made to Order," which I have not read.  Long won various high profile awards as well as the praise of people like Lovecraft; maybe It Was the Day of the Robot will be the work that convinces me he deserved all those accolades? 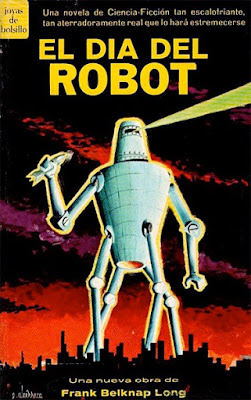 Based on its cover, and the cover of so many foreign editions, I expected It Was the Day of the Robot to be like a Godzilla movie, about a cyclopean robot running amok while the government's top scientists and the National Guard scramble to end its campaign of destruction.  In fact, Long's book is about love, sex, and a war of independence against tyrannical paternalistic government!

It is the year 2263! Mankind is ruled by a computer known by its adoring fans as the Giant Computer, and colloquially, by skeptics, as The Big Brain. One of BB's signature policies is a strict eugenics regime that judges every individual's right to reproduce based not only on his or her fitness, but on the current needs of Society.  (BB's supporters put a capital "S" on "Society.")  As our novel begins, first-person narrator John Tabor has just had his third application for a license to mate rejected--he is a perfect physical specimen, but Society already has a sufficient number of his type.

Standing next to John in the "computer vault" where you go to collect BB's judgements, which are printed on metal strips that get spit out of the wall (I'm visualizing this place as like a cross between the automat and the DMV), is a beautiful woman, Agnes. Agnes has also just had her right to sex denied. Agnes and John fall in love then and there, but then there is a disturbance and when John turns back, Agnes has disappeared!

The solar system is full of men bereft of sexual relationships either because they have been deemed dysgenic by BB or because only men are allowed on Mars and Venus, where human habitations are under construction.  Luckily, substitutes for women are available! These include parlors with hypnotic helmets which provide simulations of sexual relationships, and, new on the market, android women! Lonely and horny, John orders an android woman.  (All of a sudden the title of the original story is making sense!)  By studying the narrator's own genetic code (genetics is a major theme of this novel) the android makers promise they will be able to produce a woman who exactly matches John's deepest sexual desires.  Well, physically, at least--the eggheads admit they haven't quite mastered creating artificial brains and John's android dream girl will probably have the mentality of a seven-year-old! 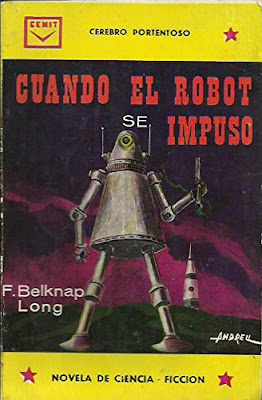 These androids are sort of a grey market item, and so it is no surprise when the cops come knocking at the establishment where John is picking up his artificial inamorata, whom he decides to call "Claire."  A scuffle and chase ensue, and John and Claire flee to the ruins of New York City, where live society's outcasts, eking out a rough existence beyond the oppression, but also the law and order, of BB's government. Most of the people in the ruins left BB's domain because they were denied the right to have sex by the electronic dictator, and there is much violent competition between men over women among the ruins of my old Manhattan stomping grounds.  In a wild coincidence, the first outcast John and Claire encounter is Agnes, whom John never expected to see again!  We've got a love triangle on our hands!

It doesn't take John long to choose between these two chicks, however.  Almost immediately Agnes is revealed to be an agent of the Big Brain, sent to John to seduce him. You see, John has telepathic powers, and spent two years working on Venus.  The men on Venus, far from BB's direct supervision, have gained an appreciation of freedom, but are frustrated by the lack of women.  BB has uncovered a conspiracy among these Venusians, an independence movement, and thinks John is just the man to infiltrate it!

Of course, our hero is, in fact, just the kind of guy who wants to sign up with the Venusian patriots!  He and Claire skip out on Agnes and run around the ruins, engaging in fight scenes and chase scenes that have brutish men trying to seize Claire to satisfy their lusts and BB's cops trying to capture John. All the while our narrator has to explain the simplest things to Claire, who has the mind of a child.

John and Claire try to hide themselves in a crowd of people going to the "bicycle races."  In the same way that it permits the New York ruins to remain outside its authority as a safety valve that bleeds off potential revolutionaries, BB permits an arena to operate where desperate men can race bicycles.  These races are based on the chariot races of ancient Rome, firmly embedded in the pop culture consciousness by the 1880 novel and various film versions of Ben Hur--the cyclists are armed with lances and flails, and while thousands of bloodthirsty spectators watch, the cyclists engage in brutal fights, hoping to impress the women in the stands.  John ends up escaping the cops by participating in the race himself, winning, and being carried away from the field by the adoring crowd.

All of the sexual and gender elements of It Was the Day of the Robot are going to set off alarm bells for the 21st-century reader. We are told that Claire shares many of John's genetic traits: "She would undoubtedly resemble quite a few of my great-great-grandmothers."  This reminds us of incest. Claire has the mind of a child, which reminds us of pedophilia. John repeatedly strikes Agnes, even throwing her against walls.  The women in the novel are what your college professor might call sexist stereotypes: Claire always needs help and needs everything mansplained to her, and Agnes is a spy and seductress, a femme fatale, who tries to get John to betray his principles. It Was the Day of the Robot is no safe space!

Of course I won't hold any of this against the book.  I don't read science fiction to hear orthodox opinions repeated, and I don't read books from 50 years ago expecting to hear today's elite-approved opinions parrotted.  Science fiction has a long tradition, including among its most honored practitioners (Sturgeon, Heinlein and Farmer were all accorded Grandmasters by their peers) of questioning sexual taboos and depicting sexual relationships of unusual and potentially offensive character.

Unfortunately, in the last scenes of the book Long craps out on us.  After the bicycle race, Claire and Agnes have a showdown, and it turns out that Claire is a normal woman, an agent of the Venus independence movement who has been pretending to be an android, while Agnes is an android pretending to be a real woman, built by BB to snare John.  So John didn't really smack around a (real) woman and didn't really have sex with a child or an artificial person, or really do anything that crazy at all.  Agnes isn't even killed by John or Claire in the final battle--she slips and falls on her own knife.  Lame!

More damningly, Long's style is not very good.  Long is very long-winded, slowing down the narrative with long dissertations on psychology and sexual relationships--even minor characters give lectures on love and sex. Long overwrites all the action scenes, deadening the pace with tedious descriptions of each yard of a chase or blow of a fight and with detailed explanations of the narrator's tactics and strategy. The bicycle race has elaborate and convoluted rules explained by a sports announcer whose own psychology and sexual history is explored by Long.  Long also shows off his erudition with many mentions of Freud and references to Watteau, Shelly, and Gourmont that don't necessarily add much to the novel's entertainment value.  (Though I have to admit that I don't think I've ever heard of Remy de Gourmont before.)

I like the novel's pro-individualist/anti-technocracy ethic, and having sex with an android, hiding out in the New York ruins, fighting in the arena, and fighting for the independence of Venus are all good ideas.  But I can't deny that Long bungled or undermined most of this material.  It Was the Day of the Robot didn't quite bore me or annoy me, and at 140 pages it didn't overstay its welcome, so I will award it a "barely acceptable" rating, but I am probably being generous.
Posted by MPorcius at 10:44 AM