"Open order, and no firing unless I give the order." 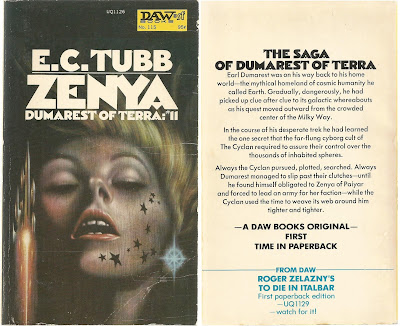 After reading two novels by giants of 20th-century British literature, I'm back to reading about a space gladiator dude!

Zenya first was published by DAW in 1974, with a cover by Kelly Freas; I own just such a copy.  I like the space ship on the cover, but I'm not crazy about the woman's face--Freas seems to be experimenting with odd angles (hello, nostrils!) and a sort of translucent or chalkboard look here, and I'm not sure it works.

While among the stacks Dumarest gets picked up by a gorgeous blonde (I guess this is where Dumarest's and my lives diverge), the Zenya of the title, who is acting as an agent for her venerable grandfather, Aihult Chan Parect, the patriarch of the House of Aihult.  Paiyar is one of those planets where everybody is part of some house or guild, and House Aihult is the most powerful house.  Chan Parect thinks a period of instability is about to erupt, and he wants Dumarest, one of the galaxy's finest fighting men, on the side of House Aihult when the shit hits the fan!  He also thinks House Aihult has become decadent through too much inbreeding, and suggests that Dumarest could bring new blood to the House by marrying Zenya or Zenya's aunt, the equally horny Lisa.  Both of these women are eager to get into Dumarest's pants.

(Remember when Vic was going to bring new blood to that underground post-apocalyptic colony?  Good times!) 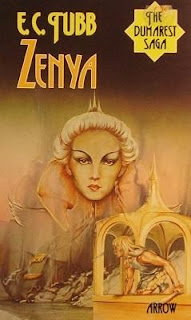 I got a kind of "Oriental kung fu" vibe from House Aihult, despite Zenya's blonde hair.  Everybody in the House, including Zenya, has "slanted eyes," they study a form of unarmed combat in which the open hand is used, and throw around phrases like "honored grandfather."

Dumarest's first job for House Aihult: go to the planet of Chard, accompanied by Zenya, to find Chan Parect's son, Salek, an intellectual and historian.  Why is Dumarest sent on this mission instead of one of Chan Parect's relatives or longtime retainers?  Grandpa is paranoid and has reason to suspect everybody in House Aihult is out to kill him!  Dumarest, of course, wants nothing to do with Chan Parect, Salek, Zenya, or Lisa, so what's to stop him from skipping out on these zany characters once he gets to Chard?  Well, while Dumarest was asleep, Chan Parect had a chip implanted in our favorite space gladiator that, should he try any funny business, will alert the evil Cyclan (they've been chasing Dumarest since book four, Kalin, because only he knows the secret formula those cold-hearted calculators need to control the galaxy) of his whereabouts!

(Remember when that wizard put an irritable creature bristling with talons inside Cugel the Clever's body that would keep Cugel on task when he was on the quest for The Eye of the Overworld?  Good times!)

Dumarest quickly gets himself hired as field marshal of the armies of the civilized farmers and merchants of Chard; their enemy is the primitive and formerly peaceful forest-dwelling natives known as the Ayutha.  The Ayutha are human, but they landed on Chard long before the farmer/merchant colonists arrived and evolved independently, developing a form of empathy/telepathy.  Tubb portrays the Ayutha as innocent and ineffectual hippies; their mental powers render them unambitious (they like to sit around and dream) and practically unable to hunt or fight (they can feel the terror and pain of their victims.)  Salek is living among these natives, helping them build weapons to protect themselves from the Chardians.

Dumarest's position as top general gives him the chance to give lots of "war is hell," anti-war speeches. "'War isn't a game conducted with neat, clear-cut rules. There is no glory, and little honor.'"  "'With sufficient force it is possible to defeat any enemy, but if the force used is too great, what have you won?  Corpses and desolation.  In my experience, it is always better to negotiate.'"  The folly of rushing into war without first weighing all the options and assessing costs is one of the novel's themes.  I interpreted the tenth Dumarest book, Jondelle, as being a warning about the dangers of inaction and an apologia for self-defense, and Zenya feels like a companion piece that warns of the dangers of recklessness and reminds us that violence should be a carefully considered last resort. 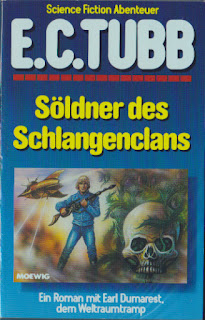 Dumarest figures out that the natives are not responsible for the attacks which touched off the war; a mutant strain of the plant the Chardians grow and sell to other planets, the very foundation of their economy, has been releasing spores which cause hallucinations and drive people to a murderous frenzy.  Those who come upon the gory remains of farm villages assume, wrongly, that the Ayutha are to blame.  Dumarest ends the war, but angers the growers by destroying their crops, so he has to leave Chard fast.  The House Aihult storyline is resolved when it turns out that Chan Parect was lying about the chip (!) and when Zenya and Lisa (who arrived on Chard on the next ship from Paiyar), get in a cat fight which leads to Lisa's death and Zenya's imprisonment.

Zenya, I'm afraid, is one of the weaker of the Dumarest novels I have read.  Zenya, Lisa, Salek, and Chan Parect aren't very interesting and don't get much screen time. The plot is convoluted, and not in a surprising or compelling way: I was disappointed that the chip was a lie, and a "war" consisting of a dumb mistake caused by a natural disaster, a war with no battles or villains, just a bunch of friendly fire incidents, is kind of boring.  Way too much time is spent on this bogus war: Dumarest lands on Chard on page 51, and on page 62 it is clear to the reader that the natives are blameless, but Dumarest's investigation, and his efforts to convince the skeptical Chardians, grind on for like 90 repetitive pages.  Again and again Dumarest orders the Chardians to hold their fire, and again and again they disobey and cause friendly fire fatalaties, out of incompetence or due to the influence of the spores.  The innocence of the Ayutha should have come as a surprise instead of being telegraphed to readers long before it was evident to the characters.  I would have preferred Tubb to spend more time developing the Dumarest-Lisa-Zenya love triangle.

A little disappointing, but acceptable.  Hopefully I will derive greater enjoyment from the twelfth Dumarest novel, Eloise.
Posted by MPorcius at 8:08 PM