I'm back on the titans of British literature beat!

I recently spent a day walking around Manhattan--according to the little "Health" feature on my iPhone I walked over 13 miles. One of the places I visited was The Strand, the famous bookstore. Outside on the sidewalk I picked up two books from the "Special 48 cents" box, a biography of Oliver Goldsmith and a tiny paperback of two Kipling stories, a "Penguin 60" published in 1995.

The Penguin 60s, I glean from the back cover, were issued in celebration of the publisher's 60th anniversary, and cost 60 pence. There is a list of titles in this celebratory series in the back of the book (see below); for the most part they are by writers you would expect, like Melville and Camus and Updike, but I was surprised to see one dedicated to Poppy Z. Brite. (I've never actually read anything by Brite, though I know her name from horror anthologies.  Maybe I would like her--Will Errickson and Harlan Ellison do.)

The two Kipling stories included in my Penguin 60 (reduced to a mere Penguin 48, you might say) are linked by the fact that they "reflect Kipling's own experiences in life."  "Baa Baa, Black Sheep," the people at Penguin tell me, is a recounting of Kipling's youth, spent with a foster family in England, while "The Gardener" is an allegory of his suffering after his son was killed at the Battle of Loos in 1915. 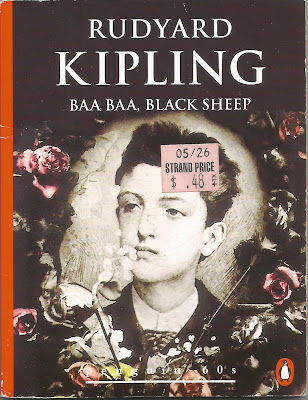 Five-year-old Punch and three-year-old Judy (curious pseudonyms for a brother and sister, perhaps reflecting the boy's somewhat anarchic and potentially violent life and character) are English children living in India, beloved by their parents and servants, given carte blanche to do whatever they want.  So being sent to live with a foster family back in England that consists of a tyrannical and petty religious bigot, "Aunty Rosa," and her cruel teen-aged son, Harry, is hard on poor Punch.  Every move he makes results in psychological and physical punishments from these two creeps, who take to calling him "Black Sheep" and fill his mind with visions of Hell and the idea that he is a sinful liar.

When he attends school, Punch's class snobbery ("'If I was with my father,' said Black Sheep, stung to the quick, 'I shouldn't speak to those boys.  He wouldn't let me.  They live in shops.  I saw them go into shops--where their fathers live and sell things"), and Harry's poisoning the minds of the other students against him, lead to fights and beatings.  Punch is under so much stress that he contemplates murder, arson, even suicide, and engages in brazen deceptions and makes terroristic threats in an effort to achieve some peace.  Aunty Rosa and Harry's harsh tutelage, which ostensibly has the object of making Punch behave virtuously, has in fact driven him to dreadful misbehavior.

One of Punch's few refuges is reading, and his father sends him gifts of books like the fairy tales of the Brothers Grimm and Hans Christian Anderson, though Aunty Rosa discourages him from spending time with his books and asking adults for help defining odd words--she thinks he is just "showing off."  "Uncle Harry," a veteran who talks incessantly of the Battle of Navarino and treats Punch decently, is another comfort, but he dies shortly after Punch and Judy's arrival.

After five years of this nightmare, Punch and Judy's parents come to England to collect them, and happy days are here again.  Mom's generous parenting is more conducive to making Punch behave than Aunty Rosa's tyranny ("...when one can do anything without question, where is the use of deception?")  However, Kipling reminds us that "when young lips have drunk deep of the bitter waters of Hate, Suspicion and Despair, all the Love in the world will not take away that knowledge...." Perhaps we are expected to see these horrible years as formative ones, that it was in such miserable circumstances that Kipling's passion for literature and interest in some of his characteristic subject matter was aroused.

This is a solid story.  Like much of Kipling's work, besides being entertaining, at times moving, it provides the 21st century reader with insight into Victorian attitudes about religion, race and ethnicity (among the students are Jews and a black boy), and social class. 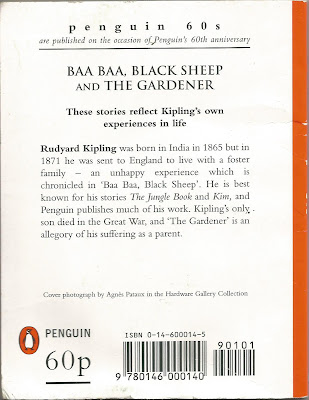 I have to admit this one brought a tear to even my cynical eye!

Helen Turrell raises her "nephew" Michael, whom she tells everyone is the product of a scandalous relationship of her dead brother's.  Michael wants to call Helen "Mummy," but she refuses to let him, because, she says, "it's always best to tell the truth."  (The propriety of telling untruths is a theme of both stories in this little collection.)

Michael is commissioned as an officer during the First World War, and like Kipling's own son, is killed and listed as "missing." Like Kipling, Helen becomes involved in the administration of war memorials.

Over a year after the end of the war Michael's body is found and interred in Belgium. Helen travels to the Continent to visit his grave; on her journey she meets other women on similar pilgrimages, witnesses their grief.  One such woman has to deceive others as to whose grave she is visiting, because the fallen soldier was her illicit lover.

At the cemetery Helen has trouble finding Michael's final resting place among the thousands of graves, and is directed by a gardener, who says, "Come with me...and I will show you where your son lies."  This gardener is, in fact, Jesus Christ; this is an allusion to John 20:15, a footnote tells me.

On a first reading I misinterpreted the story; I thought that Christ was telling Helen that, because she raised Michael and she and Michael loved each other, that in every way that matters, she was his mother.  What I was missing (and what I learned while googling around to see if the cemetery in the story was a real one) was that Michael was Helen's biological son, and all that business about him being her brother's son was an elaborate lie to cover up her own illicit affair.  There are plenty of clues that this is the case in the first few pages of the story, but I missed them, naively taking what Helen had to say at face value.

A moving, and (for dunderheads like me, at least) tricky, story.

I've been impressed with the Kipling I've read in the past (I think The Light that Failed, which I read shortly before starting this blog, is great) and I think these two stories also have quite a lot to offer.  Presumably they are available for free online, but I don't regret purchasing this little Penguin 60, which is a curious artifact and a souvenir of my pleasant day in Manhattan--only the gods know when (or if) I will spend another such day.
Posted by MPorcius at 2:28 PM