A body change seemed to be in order, and a sex change as well. 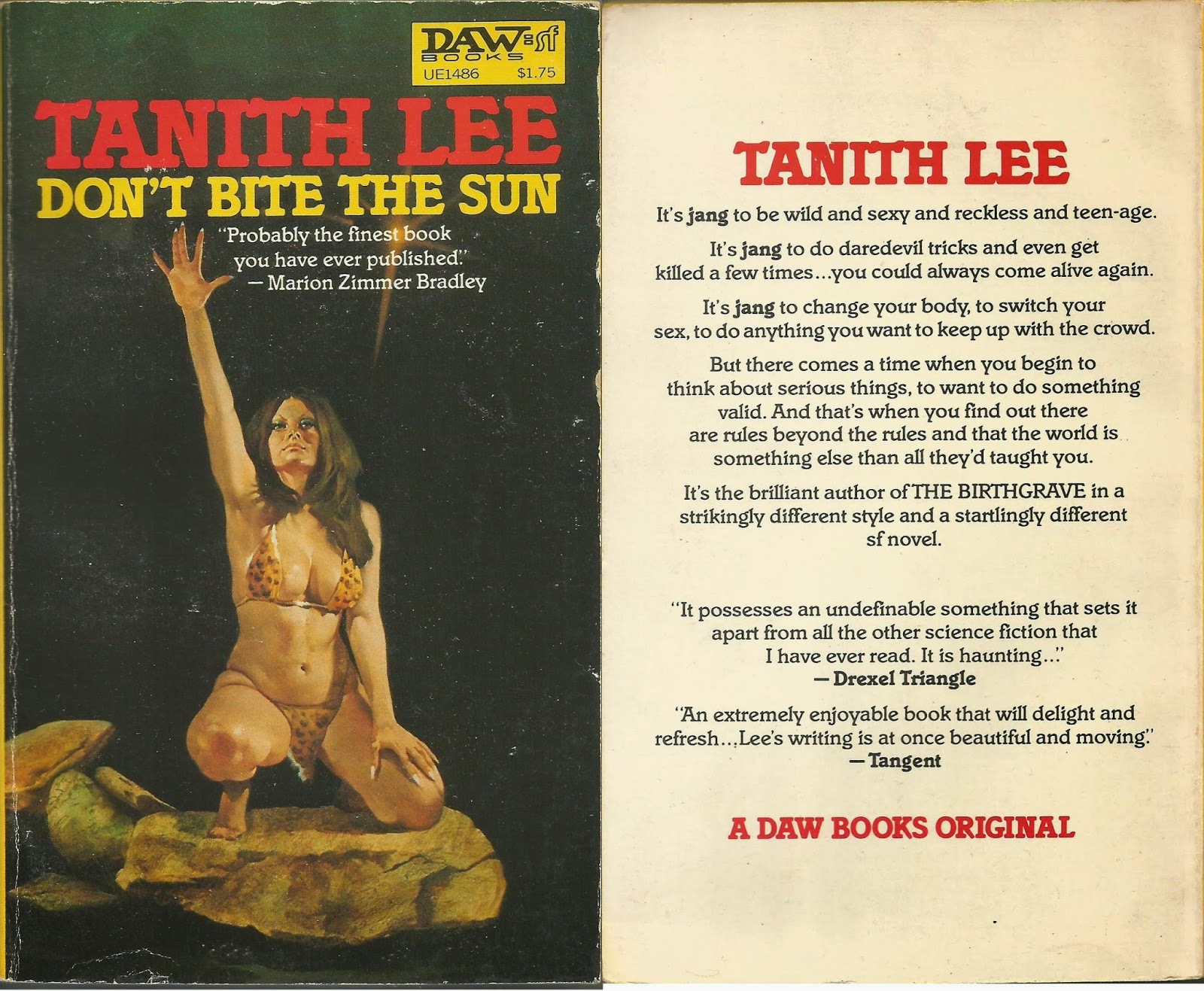 Above the bikini babe on my copy of DAW UE1486, Don't Bite the Sun, is Marion Zimmer Bradley's assessment of this 1976 novel by Tanith Lee: "Probably the finest book you have ever published."  Talk about effusive praise!  I've never read any fiction by Bradley (check out tarbandu's skeptical take here, here, here, and here), and Bradley seems to have been a dangerous fiend who belonged in a prison, but I suppose I should be thankful for her championing of Lee, of whom I am a big fan.

On the back of the book are similarly ecstatic blurbs from a student newspaper and something called "Tangent."  Google reveals many periodicals have been named "Tangent" or "Tangents," ranging from a fashion magazine to a poetry journal to a magazine dealing with gay issues.  The Tangent in question is probably an SF fanzine, some fun 1975 and 1976 cover images of which I found on ebay.

So, does Don't Bite the Sun deserve this praise?  On the weekend I read the 158-page novel in an effort to find out.


As in what is perhaps Lee's most famous work, The Silver Metal Lover, our first person narrator is an emotional teen-age girl.  She lives in domed city Four BEE and is a "jang."  Jangs are the youth, those who have graduated from hypno-school but not yet joined the ranks of "Older People." Jangs are encouraged to act irresponsibly and explore the possibilities of life, and one of the questions the novel seems to ask is: are there any real responsibilities and real possibilities in a world of perfect safety run flawlessly by machines?

Jangs often change their bodies for cosmetic reasons, or based on a whim, and when designing a new body can not merely determine things like height, weight, and sex, but add additional eyes, wings, antenna, tentacles, even multiple heads.  The machines can also bring back to life those killed in accidents or violence, and so Jangs will take terrible risks for fun, or simply commit suicide when moody.  Our narrator regularly drowns herself when she is depressed, and has a friend who has died crashing his airplane into the same building dozens of times.

The narrator does not find satisfaction in the jang lifestyle, and applies for permission to become an "older person" early.  When, after a battery of psychological tests, she is denied permission by the robots, she tries to find meaning in work or art, but there is no work to do, and it turns out that even artists rely on robots to create their art for them.  Her next idea is to have a child and become a parent, and after donating an egg she leaves Four BEE, via mass transit, to seek an acceptable mate in other domed cities, Four BAA and Four BOO.  (I'm guessing the names of the cities are Lee's jocular references to hive insects; sheep, which are proverbially mindless followers; and maybe ghosts.)

Our narrator fails to find a partner she feels comfortable having a child with, and, at Four BOO, she changes her sex.  "He" returns to Four BEE to try to donate sperm and be both father and mother of a child, but this does not work.  "You have killed your child," the robots tell the narrator, throwing her into despair and leading to her latest suicide by drowning. 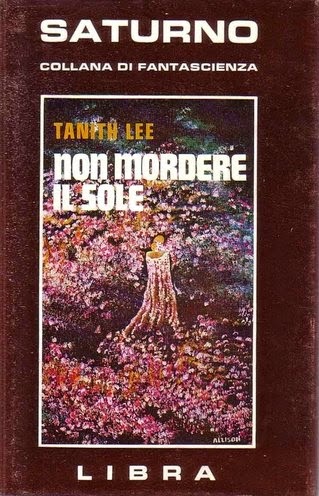 Unlike most people on the planet, the narrator found the deserts between the domed cities she saw through the windows of the "sand ship" fascinating, and so, back in a female body, she jumps at a chance to join an archaeological dig at a ruin out in the barren waste.  On this adventure, the climax of the novel, she gets lost in a sandstorm, endures real danger and witnesses real rain and real flowers blooming, interacts with real animals that were not gestated in a test tube, and suffers a real loss when a pet of hers is killed.

In the final pages of the book Lee gives us some ideas of what important things are missing from this world where there is no danger, no toil, and few restrictions on sensual pleasure.  The narrator utters the phrase, "Oh God," before fainting, even though she and her friends have no idea what the word "God" means.  One of the narrator's male friends who has chosen to wear a hideous monster body wants to marry her, and the narrator agrees, on the condition that he get a new, attractive body.  But the friend insists that he wants her to love his inner self, not the changeable surface, and the marriage does not occur. The narrator's aviator friend, who dies in scores of suicidal plane crashes, reveals that he kills himself this way because it is painful, because "pain is a reality."

Lee seems to suggest that, while 20th century people suffered all sorts of dangers and restrictions, all manner of fear and bigotry, their lives had meaning thanks to things like love and religion (and work and art), things almost unknown in Four BEE.  Also, that a life divorced from risk, from death, is also divorced from the natural world and reality.

So, why did Marion Zimmer Bradley and the others who provided blurbs on my copy think Don't Bite the Sun was so singular, so special?  This is obviously a more philosophical and unconventional book than the numerous sword and sorcery capers and space operas put out by DAW; maybe we should see it as "New Wave."  In addition, Don't Bite the Sun is largely about rules, and rule breakers, something I suspect appealed to Bradley.  Bradley, a lesbian who married men, who seems to have had contempt for taboos and laws against incest and pedophila and edited a book about pederasty, a feminist who abandoned Christianity for paganism and who wrote a version of Arthurian myth focusing on women instead of men, appears to have been the kind of person who didn't take rules very seriously, or only took them seriously when she was overturning or undermining them.  Don't Bite the Sun shows a world in which almost every custom or law of middle-class 20th century society has been overturned by technology, and features a protagonist who doesn't just accept the state of the world she was born into, which in so many ways seems like a 1970s counterculture vision of utopia, but rebels against it, trying to escape its restrictions and break out of its own traditions and rules. 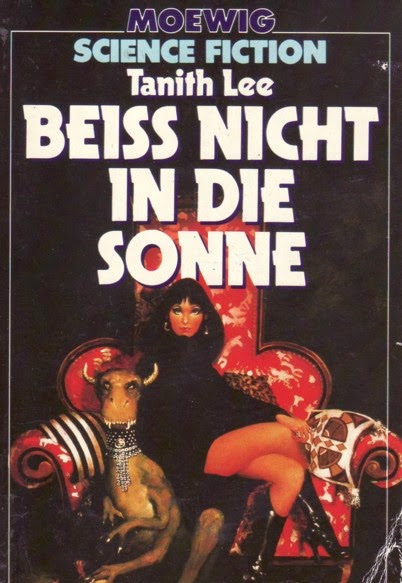 Cleverly, and satisfyingly, Don't Bite the Sun exhibits a mature and thoughtful attitude about rebellion and rule breakers.  The novel celebrates those who break the rules, but also critiques them, depicting the price of rebellion and suggesting that changing the rules can have negative as well as positive consequences.  "DO NOT BITE THE SUN, TRAVELER, YOU WILL BURN YOUR MOUTH" reads an inscription on an ancient artifact the characters discover on their archaeological dig, and our narrator comes to interpret it as a warning that breaking the rules can have painful consequences ("The sun is the Ordained Way of living... I'd bitten ceaselessly and hopelessly, and I was burned....")  The narrator broke the rules and has suffered, and perhaps her society, by conquering death, nature and scarcity, has also broken rules and thus suffered the loss of the comforts and pleasures of love, work, religion, and the natural world.

Don't Bite the Sun is thought-provoking, and I found the tragic events of the last third or so of the book to be emotionally affecting.  It is not a horror story or a sword and sorcery adventure, like so much of Lee's work, and it isn't as well-plotted a human drama as The Silver Metal Lover, but it does address Lee's oft-addressed themes of decadence and unconventional sexual relationships, and I think it will appeal to philosophically-minded SF fans.   I enjoyed it, and I'm quite curious about the sequel, Drinking Sapphire Wine, which I will pick up as soon as I encounter it in my travels.
Posted by MPorcius at 3:30 AM