The Reefs of Earth by R. A. Lafferty

This 1968 novel, like the other Lafferty works I have read, is unconventional, a bizarre fable or fairy tale full of silly jokes that disregards believability, character development, pacing, and other typical literary concerns. The book is punctuated by brief tall tales told by the characters and includes numerous references to some of Lafferty’s particular interests, Christian theology and Native American Indian history and lore. Lafferty also takes swipes at government welfare and agricultural policies and government inefficiency and corruption in general; it is notable that Reefs of Earth was a preliminary nominee for the 1984 Prometheus Award Hall of Fame for Best Classic Libertarian SF Novel. 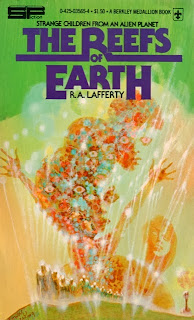 I read the 1977 Berkley Medallion paperback, with the Richard Powers cover. The last four pages contain advertising for the works of Robert Howard, Poul Anderson, Robert Heinlein and Frank Herbert, including a listing for the 1978 Dune Calendar by John Schoenherr.

Reefs of Earth is the story of the Dulanty family, four adults and seven children (or, perhaps more accurately, six children and one ghost child) who are members of the alien race known as the Puca. The Dulantys were sent to Earth to scout around, learn Earth culture, and perhaps solve the problem presented by Earth. Earth, we are told repeatedly, is the meanest, scariest, stupidest planet in the universe, and most of the human characters act as evidence for these assertions. Exceptions are made for some humans, including American Indians, a priest, and the writer of The Gospel According to Luke. The bulk of the novel takes place in and around the small rural town of Lost Haven, site of a coal mine and a commercial fishery.  Lost Haven is run by three murderously corrupt men: Coalfactor Stutgard, his right hand man Crocker, and lawyer and politician Mandrake Marshall.

The Puca can pass for human, but most look odd - we are told their features resemble those of goblins, ogres, or kobolds. The alienness of their appearance waxes and wanes depending on their mood or health. The Puca have great power; their Bagarthach verses, when recited, can (among other things) bring inanimate objects to life and kill humans. Lafferty includes many of these four line poems in the text, and it seems that he wrote them to be intentionally bad, for humor value.

Despite their superiority to humans, the Puca have a very difficult time on Earth, being susceptible to “Earth Allergy.” This malady, to which the adults are particularly vulnerable, leads to weakness and death, and during its course it causes terrible psychological damage; Puca afflicted with Earth Allergy may sour on life, become unwilling to forgive trifles, and even begin to fear death as humans do.  Healthy Puca understand, of course, that death is simply the passage to a new and exciting period of existence.  As in The Devil is Dead, in this Lafferty novel there are numerous references to life after death.

The four adult Puca are incapacitated early in the story, due to death, illness, and incarceration by the authorities on trumped-up charges. The seven children set off on their own to avoid being scooped up by the welfare system. They buy the town drunk’s raft with a stolen bottle of whisky, and, accompanied by the drunk’s goat, set sail on the ambitious mission they have set themselves: the mission of exterminating all human life on Earth.

The Puca children, despite their best efforts, never actually manage to kill anyone, though they do cause lots of property damage and are pursued by the authorities. Indians (some alive, some dead) help the children evade capture. Meanwhile, the two male adult Puca, also aided by Indians, contend with Stutgard, Crocker and Marshall. There is a jailbreak, a blistering chase, and a violent showdown, and in the end all of the adult Puca, as well as Stutgard, Crocker, and Marshall, are dead. The six children (the ghost child has vanished), have been matured by their adventure, and when they sail away from the newly liberated Lost Haven, they are still intent on fixing the Earth, but have decided to try to do so without killing all of mankind.

What to say about such an odd piece of work? It is entertaining, and its inherent strangeness makes it engaging and novel, so I can recommend it, but as far as ideas, plot, or characters (the most well-realized and interesting character is Mandrake Marshall, the lead villain) are concerned, there is not much going on. Maybe I am missing some allusions to the Bible or to Irish or Indian folklore, and there is more going on than I realize. So, a recommendation, but a conditional one.
Posted by MPorcius at 12:56 AM