Out of this World Science Fiction Classics from Bantam, 1983 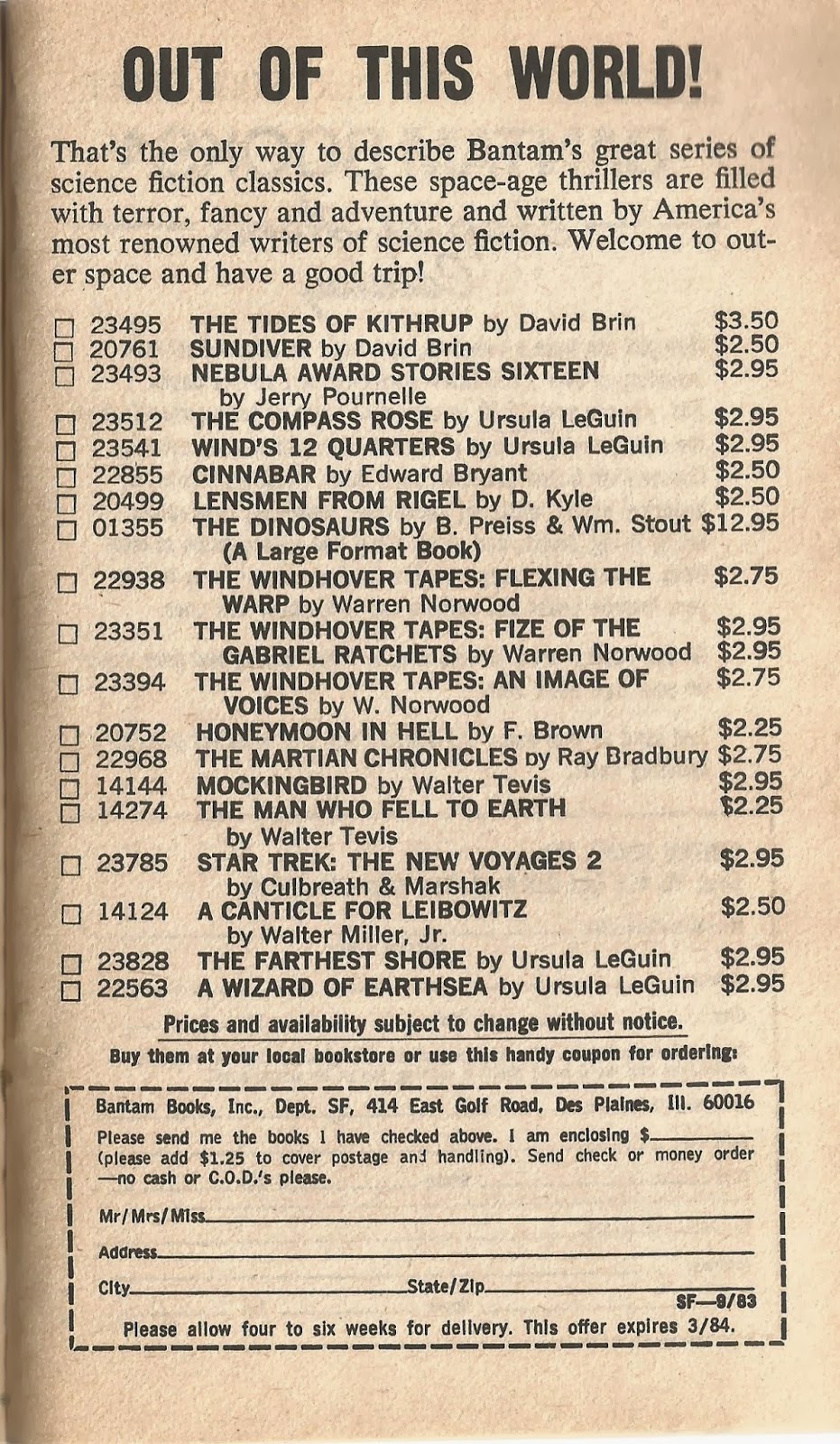 In the back of my 1983 copy of Samuel Delany’s Empire Star is this advertisement for Bantam’s “great series of science fiction classics,” full of fancy, terror and adventure.  What is the story with these ads?  Why do some paperbacks have them, and others do not?  Was Delany annoyed that his book contained ads like this?  How were the books chosen for the ad... are these books Bantam is proud of, or are these books they printed too many of and are scrambling to unload?  If Ursula K. LeGuin saw this page back in 1983 would she say, "Awesome, my buddies at Bantam are really working hard promoting my work!"  or would it be more along the lines of, "Cripes, Bantam must really be having trouble selling all those copies of my Earthsea books to the stores."  How many people actually used this "handy coupon" to order books from Bantam?  What percentage of Bantam's gross revenue came from such orders?

Four of these books are by Ursula K. LeGuin, whom I’ve never read, and three of them are by Warren Norwood, whom I’ve never even heard of, but I am familiar with several of the listed books.

I read this in the ‘90s, in fact I think it was the first SF book I read after a few years of avoiding SF and reading mostly history and poetry, the period when I thought I might actually finish grad school and get a degree.  I thought Sundiver was just OK; I liked the sciency stuff of flying into the sun, but wasn't impressed by the murder mystery stuff (the guy with laser eyes did it.)  I never read any more of Brin's fiction, though his critique of Star Wars (that it is elitist and promotes hereditary aristocracy), which I must have read in Slate right after "Phantom Menace" came out, I found very interesting and has stuck with me.

The Dinosaurs by William Stout, Byron Preiss and William Service 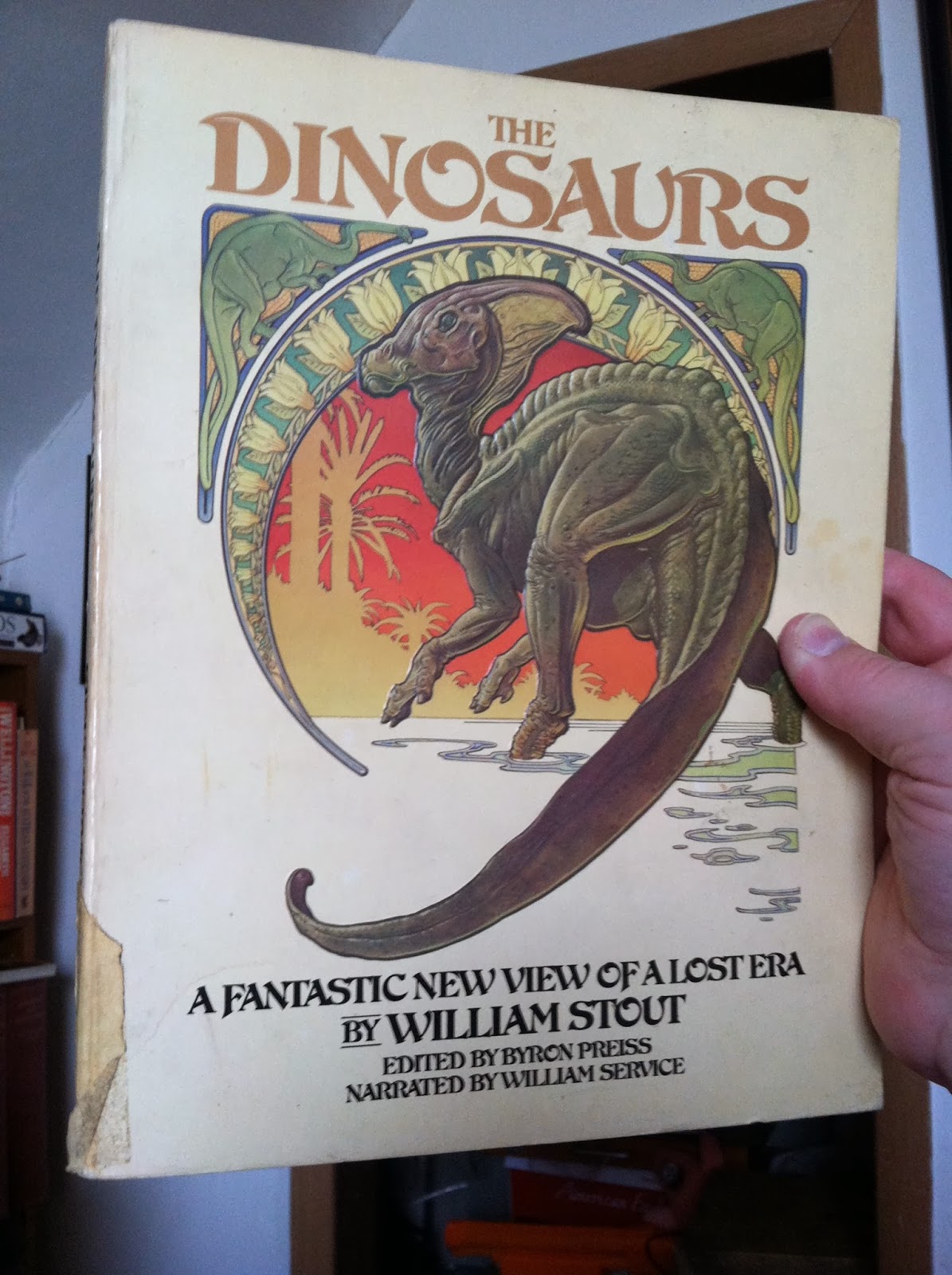 I love this book to death, and have spent many hours admiring the beautiful illustrations.  Stout works in various media and various styles, so even though its dozens and dozens of pictures of dinosaurs by the same guy, each page is fresh and exciting.  I can still remember seeing this in the bookstore in the mall for the first time, and then buying it on a subsequent trip.  The store only had one copy, and it was a little shopworn, but I put a piece of masking tape on the spine and the book is still in one piece, 30 years later.

Harlan Ellison also loved The Dinosaurs, and wrote a gushing blurb-sized review for it in the February 1982 issue of "Heavy Metal," which I learned on tarbandu’s blog, The PorPor Books Blog, back in February of 2012.   There is also an enthusiastic preface by Ray Bradbury.


The Martian Chronicles by Ray Bradbury

As I have said earlier, I don’t think I have read every story included in all the different editions of Martian Chronicles, but I have read many of them here and there, and liked them.  I think Thomas Disch's criticisms of Bradbury (that Bradbury can be too sappy and sentimental) have some merit, but in the same way that I still like Star Wars even though David Brin scores some points against George Lucas, I still like lots of Bradbury's work.  "The Silent Towns," one of the stories included in Martian Chronicles, isn't sappy or sentimental at all.

The Man Who Fell To Earth by Walter Tevis

I saw the movie of this with David Bowie. I really like Bowie, as a musician and just as an appealing character who livens up the TV screen whenever he appears, and the movie had some memorable images and scenes, but also felt too long and a little too silly.

A Canticle for Leibowitz by Walter Miller, Jr.

I read this in the mid '90s, when I worked at a bookstore in New Jersey, after graduating college but before moving to New York and starting grad school.  This may have been the last SF book I read for a long time, before the SFless period ended by Sundiver. (Though I read Dave Wolverton's On My Way To Paradise and two Serpent Catch books around the same time.  I enjoyed those books, and remember them pretty well.) I remember very little of A Canticle for Leibowitz, except a vivid discussion of how you shouldn’t try to euthanize a sick cat.  I should probably read A Canticle for Leibowitz again.

************
If you want to join Harlan, Ray and me in gushing about Stout’s The Dinosaurs, or if you want to tell me who Warren Norwood is and why I should know him, or say anything at all about these Bantam books or David Bowie, feel free to do so in the comments.
Posted by MPorcius at 12:10 PM