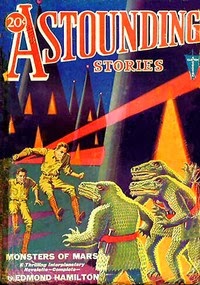 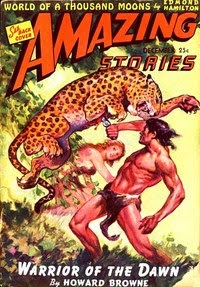 Project Gutenberg is a good source for classic science fiction and fantasy that have fallen into the public domain.  Last night and this morning I took advantage of this fact and read two stories full of ray guns and dangerous aliens by Edmond Hamilton, SF pioneer and husband of famed SF writer and Hollywood screenwriter Leigh Brackett.

The entire April 1931 issue of Astounding Stories is available for free at Gutenberg.org. The cover story is by Hamilton, the story of three men who travel to Mars, entitled “Monsters of Mars.”

Physicist Milton and his two colleagues have been in radio communication with Mars for two years. They are eager to visit Mars and meet their new friends, but, in this story spaceships are impossible! (O ye of little faith!) Luckily, the Martians have developed a matter transmitter device. They radio the plans to the Earthmen, who build the device. Jealous of their professional reputations, the three scientists don’t tell anyone about their contact with the inhabitants of the Red Planet. They are also not suspicious that the Martians are willing to send them the blueprints for a teleporter, but are too shy to reveal anything about their own appearance or society or history. Milton and his assistants enlist one additional friend to join them on the Mars trip, but don’t waste time telling other academics or newspaper reporters or the government or anybody like that about their jaunt to Mars. So, unbeknownst to the world, three Earthmen (one stays behind to operate the matter transmitter) are zapped off to Mars. The teleporter will operate again in exactly 24 hours.

The Martians turn out to be rapacious crocodile men who plan to use the matter transmitter to invade and colonize the Earth, Mars being worn out. They seize the three humans for a little pre-invasion experimentation. Two of the Earthlings manage to escape, and flee to the jungles that surround the Martian city. Here they are captured by hideous ten foot long worm creatures. One of the scientists suggests that these worm monsters may be descended from humans! (Evolution played a role in the three Hamilton stories I read on November 14, and here it is again; I guess Hamilton was interested in evolution.)

The worm people are just about to sacrifice the Earthlings to their worm god when the crocodile men attack with their disintegrator rays and walking vehicles. In the confusion, the humans get a hold of one of the walking vehicles, drive back to the city, rescue their buddy (I guess they didn’t experiment on him after all) and jump in the matter transmitter just in time. Back on Earth they wreck their own matter transmitter and burn the blueprints. Hamilton doesn’t tell us if they call up Mars to taunt the crocodile men.

This is a lightweight story. There is nothing really wrong with the main plot, but to be a good story something more is necessary. There is no twist or surprise; I was hoping the worm creatures would recognize the Earthlings as their allies and that the humans would lead the worms in an apocalyptic war on the city, but the evolution idea is dropped immediately. The human characters are totally uninteresting, each indistinguishable from the other. (The most interesting character in the story is the ruler of the Martians, a freak with one huge head atop three normal-sized bodies who gets to make a fun “You dummies, we have wanted to conquer your world for centuries and now you have opened the front door for us!” speech.) Hamilton conjures up an interesting vision of the Martian city, with its conical skyscrapers, walking vehicles, wide canals and suburban jungles, but there is nothing about Martian culture, politics, or society. Hamilton doesn’t pull off any particularly effective horror or action scenes either, though this material is ripe with possibility; his style here is too bland.

I often complain that a story is too long, and praise writers (I think on this blog I have praised Gene Wolfe and Tanith Lee thusly) whose stories are economical, each sentence adding to plot or atmosphere. “Monsters of Mars” presents the rare case of a story I think is too short. A story about scientists who teleport to Mars and fight crocodile men in a city and worm people in a jungle could be a thrill if the scientists are interesting characters and the crocodile men and worm people have some kind of vivid society for us to fear and/or deplore. This story made me smile, so it was worth a read, but with some fleshing out it could have been so much more.

“World of A Thousand Moons”

The December 1942 issue of Amazing Stories included a story by Hamilton, “World of A Thousand Moons.” The story is advertised on the cover, but the cover painting is for a different story, one by Howard Browne about a prehistoric man.  (Incidentally, this story, "Warrior of the Dawn," is also available at Gutenberg.org.)

“World of A Thousand Moons” is much better than “Monsters of Mars.” In the first few pages Hamilton sketches out an interesting milieu: a multicultural interplanetary society with a hardened human spaceman, a ruthless Jovian criminal, and members of the decadent Earth bourgeoisie in the foreground, and Martian and human working class and lower middle class people, a notorious space pirate, and the Space Patrol in the background. We can easily visualize these people, imagine their motivations, and feel for them or hope they are brought to justice.

Lance Kenniston, human, and Holk Or, Jovian, are desperate space-sailors looking to buy a space ship on Mars. When they find none are for sale they fool young Earth heiress Gloria Loring and her hangers on into agreeing to transport them on their pleasure yacht to the dangerous asteroid belt. Kenniston tells the rich kids they are partners in a treasure hunt; in fact Kenniston is delivering them into the clutches of infamous space pirate John Dark, whose ship, shot full of holes by the Space Patrol, is stranded on Vesta, a particularly large asteroid covered in monster-haunted jungle.

The plot that follows includes startling revelations, double crosses, speculative medical science and lots of mayhem. And a happy ending (well, except for the nameless innocent crewmembers who get killed in the struggle for the space yacht.)  A fun tale.

Hamilton was a prolific writer, and I look forward to reading more of his work in the future.
Posted by MPorcius at 2:46 PM