The Devil Is Dead by R. A. Lafferty 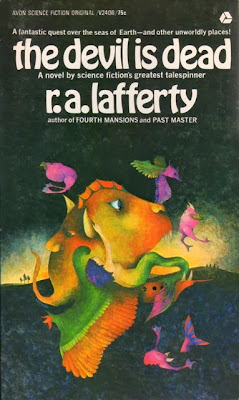 This is an unusual piece of work that makes no effort to be realistic (critics often describe Lafferty’s writing as being like “a tall tale”) and at times is self-consciously difficult. The introduction, which is titled “Promantia,” even ends with the lines, “Is that not an odd introduction? I don’t understand it at all.”

The plot of the first half of The Devil is Dead consists of the voyage of the ship Brunhilde, among whose passengers are numbered: the Devil; Anastasia, a Greek woman who claims to be a mermaid; Marie, a murdereress and some kind of leftist scold (she considers “being a lady” and “happily-ever-after” to be “bourgeois conceits,” and thinks good and evil are merely superstitions); and the main character, Finnegan, a “bugle-nosed dago with an Irish moniker,” who is not only a talented painter and draughtsman but has clairvoyant powers (Finnegan reads a letter through a sealed envelope, and has lots of hunches and premonitions.)

The novel starts with Finnegan coming to his senses, but not knowing where he is, what time of year it is, his own name or that of his companion, Saxon X. Seaworthy, millionaire ship owner. I didn’t know if Finnegan was an angel, a demon, a drunk, or a metaphor for a human soul just about to set out on life’s journey. Several times throughout the novel characters claim that Finnegan is not one of the “regular people” but one of “the other people.” Finnegan tells Seaworthy that he has “an upper life and a lower life,” and Seaworthy responds “Who hasn’t! All of our sort indulge in amnesia….” Late in the book Finnegan implies that if he, and his kind, don’t like people, they set them on fire (page 139). Does this mean Finnegan is a (fallen?) angel? On page 27 the third person narrator declares that there are two sorts of people in the world, those who belong with “such as Finnegan and Anastasia... with all good people everywhere…” and the “wrong sort” who “belong in Hell.”

Soon Seaworthy’s vessel, the Brunhilde, is under weigh (or perhaps underway.) Finnegan and his companions sail around the world, following the coast from Texas south along Latin America then across the Atlantic to Africa and north to Europe. The ship stops at every port, and in each port the Devil does his work – Finnegan, reading the newspapers, realizes that each town they visit is stricken, a few days later, by mass murder, riots, or similar large scale mayhem. The crew and passengers of the Brunhilde split into hostile factions and become embroiled in a sneaky back-stabbing fight against each other which culminates in a tremendous firefight in Greece with WWII rifles and machine guns. Anastasia and the Devil are among the dead, while Seaworthy, apparently the leader of the victorious faction, and Finnegan, who sat the fight out, survive.

In the second half of the book Finnegan seeks revenge on Seaworthy, whom he blames for the death of Anastasia, but when Seaworthy survives Finnegan’s attack, Finnegan flees across the United States, a squad of murderers on his tail. The page count of this part of the book largely consists of strange and amusing stories not directly connected to the Brunhilde/Finnegan/Seaworthy plot at all, stories about and told by the various characters Finnegan meets while on the run.

The identities of the characters in The Devil is Dead, and their statuses, are always in flux. People in the novel often die, are buried, and then reappear, so much so that on page 118 (of a 224 page book) Finnegan declares, “I become a little impatient with people who are supposed to be dead and who keep reappearing. It loses its humor after a while.” Characters have multiple names, characters who look alike impersonate each other, characters change appearance, different characters share names. I was often wondering if a character was a human, or an angel, or a devil, or The Devil. There is even a hint that Finnegan, Seaworthy, and some other characters are members or descendents of a Lovecraftian “old race” which ruled the Earth before mankind and is still pulling the strings behind the scenes. (Even though much of Lafferty’s references and themes seem to be Christian, by mentioning A. E. Van Vogt and Murray Leinster on page 164 he seems to invite the reader to think in SF categories.)

A large part of the appeal of The Devil is Dead comes from the fact that Lafferty fills the novel with odd jokes, jokes which hover between the “bad” and “bad enough that they are good” categories. There are also cryptic references and what appear to be parodies of epigrammatic wisdom. Two examples:

A description of Anastasia’s grandmother:

A description of a Greek mountaintop at night:


The moon lacked a week of being full, but the night was very bright. Here on top was nothing but rocks and gnarled old branches and stump trees. That is the way the top of the world always looks. But by Greek moon it was even stranger. Moonlight is different in Greece. As you know, it was the Greeks who invented the moon.

I read the 1971 Avon paperback (V2406) with the black Bosch-style cover. The history of the book seems almost as crazy as the story it tells. According to Wikipedia two portions of the book are missing from this edition, including the final chapter, which the publisher didn’t receive in time. I get the idea this is a relatively rare paperback; I paid almost ten times the cover price for it at Half Price Books; luckily the cover price is 75 cents.

I enjoyed The Devil is Dead and recommend it. It is unconventional, but once I fell into step with Lafferty’s style it felt comfortable, I laughed at many of the jokes, and even the Promantia was explicable when I reread it after finishing the novel. Readers interested in literary SF, Roman Catholic SF, or books you have to “figure out” should definitely give it a whirl.
Posted by MPorcius at 3:04 PM