Jack Williamson: "Hindsight," "The Happiest Creature" and "Guinevere for Everybody"

A few days ago we read Jack Williamson's 1934 tale of a half-Chinese mad scientist who wanted to create a super race, "Wizard's Isle."  Earlier in the week when I was digging through the pile of SF anthologies here in the MPorcius Library in search of stories by L. Sprague de Camp I took note of some stories by Williamson; today let's spend some time exploring (a tiny portion of) the body of work of the second recipient of the title of SFWA Grand Master. 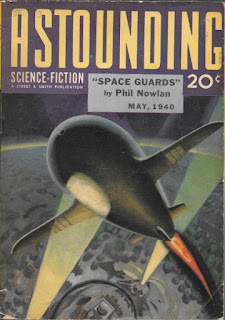 Let's start with my crumbling copy of 1957's Astounding Tales of Space and Time, Berkley G-47, a collection of stories selected by towering editor John W. Campbell, Jr. from the pages of his magazine, Astounding.  Isaac Asimov and David Drake would later include "Hindsight" in anthologies of their own.

It is the future!  Mankind has colonized the solar system.  Those who peopled the asteroids became space pirates and robber barons, seizing a monopoly on interplanetary transport, extorting tremendous wealth, and from there gradually expanding their power over the independent planets.

William Webster, Earthman, is one of the system's greatest scientists.  Twenty years ago he and his best buddy, fellow scientist Tony Grimm, were in love with the same girl, Martian-born Elora Ronee.  When Ronee chose Grimm over him, Webster decided to take up a job offer from the dictator of the asteroids--this tyrant would pay ten times what any Earth employer could pay.  Webster changed his name to Brek Veronar, and designed for the asteroid creeps a high tech system for piloting space craft and directing weapons fire, a system whose startling efficiency is the result of its ability to look a short distance into the past and future!

Over those two decades the asteroid tyranny has been strengthening its grip, manipulating and infiltrating the weak and corrupt Earth government so that the citizens of Earth groan under crushing taxes and regulations that benefit the asteroid monopolies!  Tony Grimm is a leader of the underground resistance, and has built an illegal space navy of six ships.  The dictator of the asteroids has found out about this squadron, and a fleet of thirty of his warships speeds to Earth; aboard the flagship is the dictator and his right-hand man and Grimm's former pal "Brek Veronar," Veronar is in charge of that navigation and gunlaying computer system he built.

The asteroid fleet suffers a crushing defeat--Grimm has designed a computer system even better than that of his old friend!  Aboard the crippled flagship, Veronar retools his computer system in an attempt to change the past, to alter a minor factor from their time together so that his computer system will be better than Grimm's, with the idea that the asteroid fleet will then win the battle.  But his effort is futile: the big events of history are set in stone and changing a small factor cannot alter significant outcomes; in this new history the Earth fleet of Grimm lacks a superior computer system, but wins anyway, because,  at the last second Veronar suddenly realizes betraying Earth was a mistake and turns off the asteroid forces' computer, leaving them helpless before the Earthers' gunfire.

A decent story about space navies (all the technological and military stuff is fun) and the nature of time and history; whereas the famous adage "for want of a nail" and Ray Bradbury's "A Sound of Thunder" try to tell us tiny little factors can radically change history, Williamson here argues, or at least portrays, the opposite. 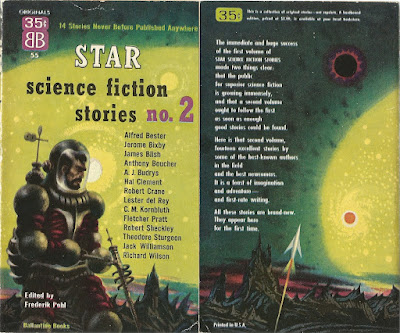 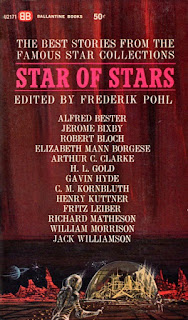 Next up, Frederick Pohl's anthology of all-new stories, Star Science Fiction Stories No. 2, featuring another Richard Powers cover.  My copy's cover is a little blurry due to some printing misalignment or something.  Oh, well.

The galaxy is full of quite human spacefaring civilizations, but we 20th-century Earthers know nothing about it because galactic regulations prevent any interference with our development and so the extraterrestrials have kept their existence a secret from us.  Galactic anthropologists and biologists live among us, able to use all their technology to hide their presence from us.  But one day a hardened criminal and sadist--a thief and murderer--escapes prison and while fleeing the cops, by mere chance, hides in an alien space ship!  He is not discovered until the space ship has taken off.

The galactics who have unwittingly taken this bloodthirsty thug off Earth are in a pickle.  It is illegal to take Earthlings off planet, so they have to get rid of him, but they can't just return him to Earth because 1) he would expose the existence of aliens to Earth people and 2) back home he has killed repeatedly and plans to kill again and so will be executed if caught by the cops, and the galactics cannot allow themselves to be responsible for the death of a human (it seems this sort of attitude is enforced via brain treatments.)  So they tell the killer that they will return him to Earth but will use their powers to make sure he is absolved of his crimes and his dream girl (who hates him, in part because he killed her father) will love him, so he'll have no need to kill anyone.

Back home on "Earth" in a small Southwestern town in the desert the murderer finds he truly has been absolved of his crimes, and then his dream girl rushes to embrace him.  He is disappointed that she is so eager to be his lover, because he enjoys beating women and wanted to use force to make her submit.  When he shoots down a defenseless man against whom he holds a grudge he finds the man is a robot!  The aliens built a replica of the desert town and populated it with facsimile people, hoping the murderer would thus be placated--in fact, they sort of expected him to be the happiest Earthling in the galaxy!  Instead the killer is enraged and, it is implied, commits suicide or dies trying to batter his way out of his gilded prison.

I enjoyed all the scenes with the galactics; their conversations with each other and their efforts to understand and deal with the Earthling sadist are good, but the end was a little bit of a let down in a way I am having trouble defining; maybe I've just been exposed to too many "Oh my goodness I just realized I'm living in an artificial Truman matrix world" stories.  Obviously I can't blame Williamson, who published this story in 1953, for that.

I often groan at pacific-aliens-as-foils-that-shame-us-violent-Earthlings stories, but Williamson doesn't push that theme too hard here: the galactics don't act like paragons--they use a lot of trickery and deception and one of them is always trying to bend the rules--and the killer Earthman doesn't come off as a representative Everyman, but a horrible aberration.

"The Happiest Creature" would reappear quite often, including in The Best of Jack Williamson, which was adorned with good covers by Ralph McQuarrie (American edition) and Karel Thole (Italian edition) and Star of Stars, an anthology collecting what Fred Pohl thought the best stories of the six Star Science Fiction Stories volumes that has a great Powers space-suit-and-domed-city cover. 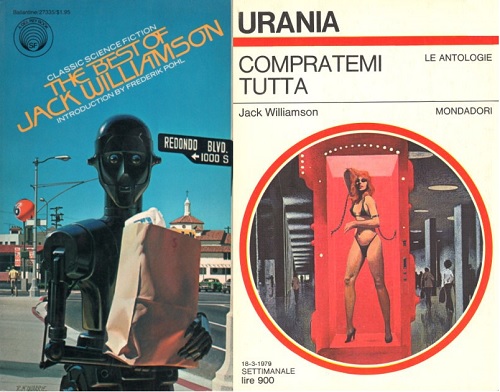 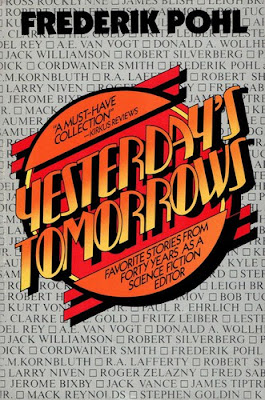 Williamson's story for Star Science Fiction Stories No. 3, "Guinevere for Everybody," also turned up in The Best of Jack Williamson, as well as a bunch of other places, like Fred Pohl's Yesterday's Tomorrows.   I actually own two copies of Star Science Fiction Stories No. 3, the 1962 printing (Powers cover) and the 1972 printing (John Berkey cover.)  I'll be reading the '72 copy as it is not falling apart as badly as its predecessor.
It is the future!  Many large commercial enterprises are now run by computers, and cybernetics engineer Pip Chimberley, a man who likes machines better than people, is a troubleshooter for the manufacturer of these electronic CEOs.  He gets an emergency call from his superiors--the computer that runs Solar Chemistics, Inc., Athena Sue, has started marketing synthetic humans and Pip's bosses don't like this one bit!  Pip flies from New York State to the Southwest to take a look at Athena Sue, and in the airport he sees one of Solar Chemistics's new vending machines.  Inside it is a gorgeous blonde with blue eyes by the name of Guinevere and she is using all her feminine charms to try to convince people (and by "people" I mean "men") walking by to purchase her!  Her attentions throw Pip, a virgin, for a loop, but he buys her as part of his research into what is going on with Athena Sue.
The two sit in a restaurant and when the beautiful synthetic woman isn't hawking other Solar Chemistics products she answers Pip's queries, describing how she was designed and produced.  Then they head to the Solar Chemistics plant, where water and solar energy are transformed into consumer goods, including, beginning yesterday, girls just like Guinevere.  The entrance to the plant is wrecked--people are angry about the new product and earlier rioted.  Pip's investigation of Athena Sue's files reveals that the management computer was programmed to market a product that would lead to her own destruction and the wholesale discrediting of computer management!  Who would program Athena Sue to commit suicide in this way?  The man she replaced as director, who was demoted to night watchman as soon as she was turned on!  The negative public reaction to the Guinevere product leads to deactivation for Athena Sue and the manager getting his job back.
Pip feels defeated; he likes machines more than people and feels he has let down Athena Sue.  But at least he still has his Guinevere!  Oh no he doesn't!  Following a strategy of planned obsolescence, Athena Sue built each Guinevere with only a 24-hour period of youth; her business plan envisaged customers trading in their Guineveres for a discount on a fresh one each day.  When Pip gets back to the hotel from the plant, Guinevere is already a hideous old crone.
I think Williamson sort of elides the reason for the riots against the Guinevere product (of course business executives don't want to be replaced by Athena Sues, but it is not clear why large enough numbers of men might resent the Guineveres enough after only one day to resort to violence) but the story isn't bad, and I guess it is sort of a joke story that one shouldn't expect to make perfect sense.  It is a perfect story for commies who relish anti-consumerist stories (Fred Pohl obviously ate it up) and maybe feminists who think men view women as objects, though the men in this story (puzzlingly, to me) don't jump at the chance to own a woman with supermodel looks whom you can trade in when she gets long in the tooth. 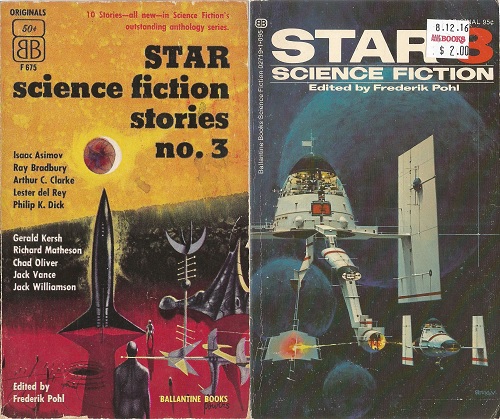 **********
All three of these stories are pretty good, with thought provoking technological business (that argues technology can't make you happy!) and the disastrous sexual relationships I like to see in the fiction I read.  More Jack Williamson in the next episode of MPorcius Fiction Log!
Posted by MPorcius at 8:48 AM