I never liked Dr. Seuss as a kid.  When I was a kid I loved violence and danger and jokes; my favorite thing was Tom and Jerry--I loved it every time Tom suffered some horrendous injury.  There was no violence or danger or jokes in Dr. Seuss, at least none I could discern as a child.  Dr. Seuss was also so often preachy, telling you to not fight or not chop down a tree or whatever--besides being boring, this seemed ridiculous to me as a kid; sometimes you gotta fight some jerk and sometimes you gotta chop down some tree.  Now, "Sesame Street" and "The Electric Company" could also be a little preachy, but they had lots of fun characters and skits, funny jokes, and an undertone of danger and violence, what with Oscar the Grouch and the Count and Letterman and Spiderman and so forth.  I also didn't like Dr. Seuss's drawing style, with its characters that all look dumpy, or sleepy, or "cute" in a cloying, irritating way.  Seuss's drawings have no dynamism and convey little emotion, and when they try to elicit emotion from the viewer they come across as manipulative and insincere.

The exception of course is How the Grinch Stole Christmas, in which a guy demonstrates some emotional intensity and goes on a risky mission, driven to exasperation by the holidays, which I agree are an excruciating hassle.  In the end, the Grinch, like Winston Smith, learns to love Big Brother, and like King Kong, is laid low by society, a horrible lesson to us all.  To me, Dr. Seuss is a one-hit wonder.

Anyway, recently Dr. Seuss has been in the news because the publisher of his books has decided to cease producing six of his titles.  These titles, allegedly, "portray people in ways that are hurtful and wrong."  When I heard this I thought maybe Dr. Seuss deserved a second look.

I had this book as a kid and I found it intolerably boring and impossible to read; it is like "The Twelve Days of Christmas" in book form, the same boring thing page after page with some slight addition which is supposed to be amusing, I guess.  Anyway, a kid, Marco, has been enjoined by his father to be alert and take in the sights while walking home from school, but the only sight he sees is a horse pulling a cart.  He considers embroidering the account he will offer his father upon returning home (I guess Dad is telecommuting), saying the cart was drawn by an elephant and was accompanied by a magician and so forth, but in the end little Marco pussies out and tells Dad the truth.  "He had won the victory over himself," you might say.  Boring.

Nothing actually happens in this story except that Marco toys with rebellion, with doing the wrong thing (lying) and then just does the right thing; there is no real conflict or journey.  It's like "The Boy Who Cried Wolf" with all the drama taken out of it.

And to Think That I Saw It on Mulberry Street is apparently "hurtful and wrong" because, along with the aforementioned magician, Marco imagines seeing a Chinese man accompanying the cart, carrying along with him a pair of chopsticks.  The story also mentions an Irish cop, and that the elephant is ridden by a "Rajah."  These characters don't do anything interesting, like throwing Muslims in a concentration camp or getting blind drunk or throwing a widow on a bonfire, so I don't know how offensive they could really be, but that is probably just because no character in this story does anything interesting.

I don't think we had this one; at least I don't remember it.  In fact, of the six discontinued books, I don't think I've ever looked into five of them until today.

If I Ran the Zoo is a lot like And to Think That I Saw It on Mulberry Street--just some brat's flight of fancy--but with even less of a plot, because the brat in this one, McGrew, doesn't even have to resist the temptation to lie.  The whole book is a list of the fictional creatures McGrew would, should he be put in charge of the zoo, catch and put on display after setting free the customary lions and tigers.  Most of these fictional animals look essentially the same and express the same limited emotions; the mammals all have the same skull and same big dumb grin:

The birds all have the same upturned beak.  Lame!  Dr. Seuss just draws the same ugly tedious stuff again and again.
Having trashed Dr. Seuss's drawings, I guess I'll say that I find Dr. Seuss's rhymes to be equally lame.  Any dolt can take an ordinary English word and then make up a nonsense word that rhymes with it.  It's like cheating!
If I Ran the Zoo is apparently "hurtful and wrong" because it includes drawings of Africans with rings in their noses and East Asians with those Japanese platform shoes I think are called "geta."  There is also a sort of desert chieftain character with a turban and a curved sword; McGrew hints that he will have one of these chieftains in his zoo, I guess a joke about the naivete of a little boy who thinks he could have a human being in his zoo, a joke that an uncharitable critic could claim is a reference to slavery.
McElligot's Pool (1947)
Marco is back!  And this time it's personal!  Marco, everybody's favorite reformed fabulist and star of And to Think That I Saw It on Mulberry Street, is fishing in some tiny pond that is full of discarded junk, and when a farmer tells him there are no fish in there Marco fantasizes that maybe McElligot's Pool is connected via a subterranean stream to the ocean, so maybe he'll catch something after all.  Dr. Seuss draws about a million silly fanciful fishes, some based on elementary puns, like a dog fish that, you know, looks like a dog.
McElligot's Pool is apparently "hurtful and wrong" because there is an anodyne picture of an Eskimo with an igloo and a spear.  I thought some Eskimos actually did live in igloos and hunt with spears, but I also thought some Chinese people actually ate with chopsticks, so what do I know?
On Beyond Zebra (1955)
This is the fourth of the six books dumped by the publishers of Theodor Geisel's ouvre that consists of some little boy's absurdist fantasy and drawings of the boring animals that populate the tyke's imaginary world.  I have to say this one is marginally better than its predecessors, however.  For one thing, the book's basic conceit is clever--conventional people may only use the 26 letters of the alphabet we all learned in that prison we call school, but the brat in this story tells us there are letters beyond Z, and helpfully informs us about the animals whose names start with these esoteric characters.  Secondly, some of the fictional letters are well-designed; Nuh, Quan and Yekk have a nice art nouveau curvature to them: 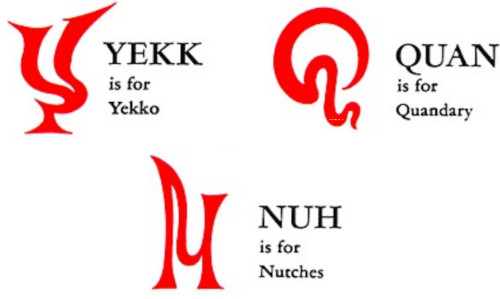 Thirdly, a few of the fantastic animals are a little creepy, eliciting an emotional response in the reader that contrasts with the boredom generated by the creatures in the earlier books.
On Beyond Zebra is apparently "hurtful and wrong" because there is a drawing of a guy riding a thing like a horned camel.  This illustration is the one for the letter Spazz, and I wonder if maybe the use of the word "spazz" is the real reason for the defenestration of this volume.
Scrambled Eggs Super! (1953)
You won't be surprised to hear that the text of this book is the monologue of some kid indulging in a silly fantasy that gives Dr. Seuss a reason to draw a bunch of limp cartoon animals, mostly birds this time around.
Peter T. Hooper tells a little girl, Liz, that he recently collected the eggs of strange birds from around the world in order to make his breakfast.  Boring.
Scrambled Eggs Super! is apparently "hurtful and wrong" because there is a drawing of some people in the Arctic in a boat.  This drawing is even more harmless than the one of an Eskimo in McElligot's Pool--there is no igloo and no spears are depicted--it is just a bunch of people in a boat.  My personal theory is that the real reason Scrambled Eggs Super! has been candled and discarded is that Seuss rhymes "frog" with "wog," which he uses as a nonsense word but, like "spazz," sounds like a common insult.
The Cat's Quizzer (1976)
I can't believe I started this blog post bitching that And to Think That I Saw It on Mulberry Street has almost no plot only to now be compelled to report that of the six books by Dr. Seuss I read today And to Think That I Saw It on Mulberry Street had the most plot and character development.
The Cat's Quizzer is just a bunch of questions that are meant to be funny, some based on puns, some meant to provoke creative answers (what would you do if you saw a dinosaur in your backyard?) others directly addressing the reader's experience (what did you eat for dinner last night?) others nonsensical and unanswerable trick questions ("What was George Washington's favorite TV program?")  One of the nonsense questions is what landed this book in trouble: "How old do you have to be to be a Japanese?"
In some ways this is perhaps the best book I'm discussing in this blog post because it is easy to see that reading it to a little kid might be fun if it inspires creative reactions.
**********
I wish I had written this blog post five years ago, because putting it up today makes it look like I am kicking a man when he is down, and by trashing Seuss it may appear that I am making common cause with the social justice charlatans, when in fact I like them even less than I like Dr. Seuss.
I'd like to defend Dr. Seuss against his detractors, but today's reading, inspired by recent headlines, has not persuaded me to alter my decades-old opinion that Dr. Seuss is lame and boring.  This perhaps raises the question of what children's books I did like as a child.  Richard Scarry is one author who is standing out in my memory.  Then there are the Sesame Street book starring Grover called The Monster at the End of this Book, The Little Engine That Could and Tootle (my Dad was into trains and so there were lots of train books), Scuffy the Tugboat and The Happy Little Whale.  These books all have actual plots in which something happens, actual characters who do something and evolve in some way, and compelling art.
Posted by MPorcius at 11:10 AM