Last week I noticed an uptick in the number of pageviews of my 2015 blog post about Anais Nin's late-1970s collection of erotic stories she composed under odd circumstances in the 1940s, Delta of Venus.  I am skeptical of the very limited web statistics I have at my disposal (it could very well be not fans of literary smut clicking on my blog post on Delta of Venus but Russian bots seeking to further demoralize our nation!) but, nevertheless, I was spurred by this phenomenon to revisit Delta of Venus.  Back in 2015 I read six of Delta of Venus's fifteen tales and, boldly taking a stand against the opinions of The New York Times Book Review, the Los Angles Times, and Cosmo, I gave them all a thumbs down.  Today we'll read four more of these stories in hopes that I will enjoy them more than their predecessors; I must ask that adults only follow me beyond the curtain and join me on these NSFW journeys of sexual awakening! 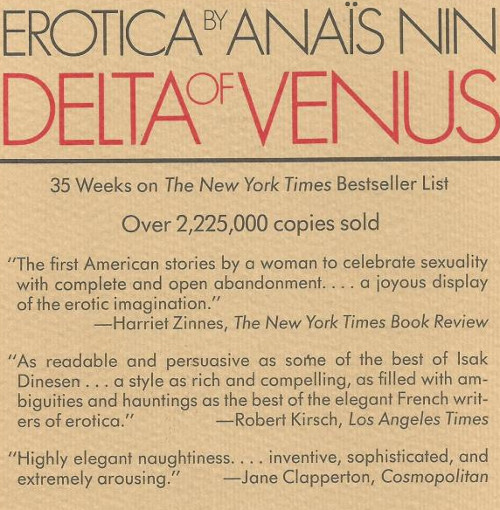 Lilith's husband Billy does not sexually arouse her, and to have intercourse she has to lubricate him with her saliva.  The reason for her frigidity, the narrator suggests, is that Billy is too easy-going, too even-tempered and tolerant--Lilith has a temper, a "jungle nature," and, if instead of being patient and kind when Lilith threw a fit, Billy also became loud and aggressive, maybe this would sexually arouse her. 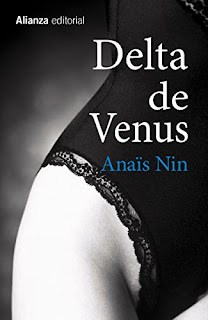 Lilith doesn't take sugar in her coffee but rather a sugar substitute, and one evening Billy tells her that he has replaced her sugar substitute with "Spanish fly" and she just drank it!  Lilith feverishly expects to become sexually aroused any moment, but she can't stay home with Billy--she promised to go to the cinema with Mabel!  At the movies she kept expecting to get wet and thinks about the possibility of having some kind of lesbian tryst there in the seats with Mabel, but Lilith's juices never actually start flowing and so never makes a move on Mabel.  When she goes home and has sex with her husband, Liltih, as usual, is unable to get aroused, and weeps at the failure of the drug.  Billy admits that he didn't really give her an aphrodisiac--he was just kidding!

Over the succeeding days Lilith tries various aphrodisiacs, including chocolate, vanilla, and onions (are those really aphrodisiacs?--they are just the normal components of my daily diet!) but they don't work any changes on her.  The story ends without any resolution to Lilith's problem being found; it feels like Nin just got tired of writing the story and called it quits instead of providing us some kind of climax in which Lilith leaves Billy, Billy learns to treat Lilith the brutal way that will excite her, or Lilith discovers some artificial means that will allow her to enjoy sex.  A conventional story has an arc in which the characters change or they change their environment, but "Lilith" is frustrating and abortive, with apparent opportunities for change arising that in the end change nothing at all.  Maybe Nin structured the story so as to reproduce in the reader the feeling of frustration suffered by Lilith?

Nin goes "meta" with this one.  The unnamed narrator of "Marianne" is a woman who is writing erotica for a private collector, just like Nin was back in the 1940s!  She also provides us an actual plot with a beginning, middle and end, you know, like a real story, the story of the title character's emotional awakening. 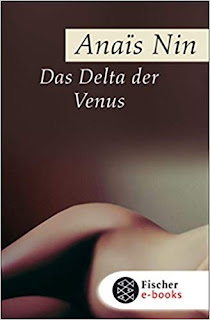 Marianne is a starving artist, a painter who types up the narrator's erotica for extra money.  A blue-eyed blonde with full breasts, Marianne has had sex with many men but the narrator considers her to still be a virgin because she has never been touched deeply by the experience of sex; her couplings had been "all external," a cold enactment of "the prescribed gestures."

The main text of the piece concerns Marianne's first emotional affair with a man.  This guy, Fred, is an exhibitionist with a perfect body who wants Marianne to paint his naked portrait because he is sexually excited by having women look at him.  Marianne comes to desire Fred, but he has no interest in sexual intercourse with her, he just wants her to worship him.  Fred moves in with Marianne and they become an item, but she is perpetually frustrated because he refuses to provide for her sexual needs, even while she serves his desires.  Fred is another of these starving artist types, and Marianne and we readers learn the story of how Fred became an exhibitionist when he writes it out to sell to that collector.  When Fred gets a job posing for art classes, a jealous Marianne angrily breaks up with him, tearing up all her drawings and paintings of him; none of those women art students may be touching her Fred, but she knows he is enjoying their stares!

This is a traditional twist ending story, but the twist isn't so great.

George, an athlete with a terrific body, is low on money.  He meets a guy at a bar.  After George brags about his sexual exploits and admits he is low on funds, this guy offers him a job: having sex with a woman who can only experience sexual arousal for "a man she has never seen before and never will see again."  George is blindfolded and directed to the home of this mysterious woman; she turns out to be amazingly beautiful, and Nin gives us a long description of the woman's body and their lovemaking--with this mystery woman George has the best sex of his life!

Months later George learns that his lovemaking with the mystery woman was witnessed from a concealed room by one of his wealthy friends--the woman and her business partner make money by charging voyeurs a hundred bucks to watch her have sex with strangers.  George, who used to be confident around women, becomes suspicious of women, even paranoid, fearing every woman who wants to have sex with him is setting him up to be watched.

This is a long one!  "Elena" is a pretty episodic story, a long series of sex scenes, but Nin does have a sort of central plot thread, the evolution of the two main characters' attitudes about sex.

Elena is a writer who feels she is searching for something, for someone.  But what?  On a train ride to Switzerland she reads Lady Chatterly's Lover and realizes that what she is hungering for is the sort of sensations described by Lawrence in the novel.  Elena realizes that there is something wrong with her, a lack of openness, that has kept her from seizing opportunities to enjoy such sensations.

In Switzerland she meets a mysterious man, Pierre, and they begin a torrid love affair that features a long sex scene ("How the honey flowed from her.")  Elena has found what she was looking for--Pierre has opened her up!  This dream love affair endures for ten days, but then Pierre, who is a revolutionary who lacks papers and is perpetually on the run from the law, has to skip town.  "I am not in love with any woman.  I never have been.  I am in love with my work."  Elena is brokenhearted, for Pierre "had not only penetrated her body but also her very being." 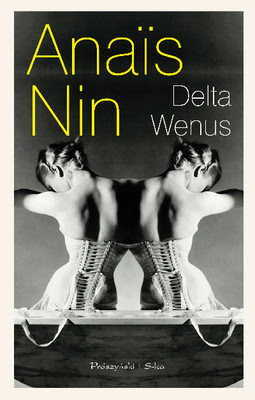 Elena returns to her home in Paris, but eventually is reunited with Pierre, who abandons his revolutionary work to become an unemployed homebody who focuses all his efforts on having sex with Elena.  We follow the ups and downs of the Elena-Pierre relationship, witnessing numerous sex acts and learning all about Elena and Pierre's youth; both of them had experiences in their pasts that border on incest.  Pierre, for example, spent a lot of time helping his mother, a promiscuous widow, dress for dates, and would jump into bed with Mom in the morning while the bed was still warm with the body heat of one of her just departed lovers.  Elena's first love was her cousin Miguel, another boy with mommy issues; he has a breast fetish and finds the vagina repulsive.  ("He was frightened by the luring crevice....")  Elena and Miguel fell in love as teens, but his fear of female genitalia and contempt for her small breasts meant that he put Elena up on a pedestal, refusing to touch her, worshiping her chastely while satisfying his physical urges with a string of boys.  This unhealthy relationship scarred Elena, and is presumably the reason she was so uptight before Lawrence and Pierre got to work on her. 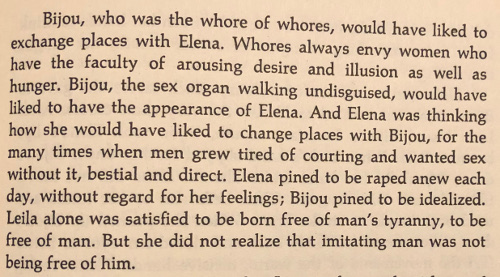 Leila, a woman who imitates a man, is an extreme example of one of Nin's recurring themes in "Elena," gender(ed) attributes and people who take on attributes characteristic of the opposite sex.  Most of the characters in the story, including Elena, who is at one point compared to "Diana the huntress, the boy-woman," are described as having some characteristics of the opposite sex; some seem to have come by these gender-bending attributes naturally, while others seem to adopt them consciously, choosing to perform male or female behaviors or employ masculine or feminine strategies to achieve their goals, depending on whom they are trying to manipulate at that moment.  Donald, for example, acts like a woman when Miguel is around but becomes masculine when he is alone with Elena.

After experimenting with other men and with women, and resolving her relationship with Miguel (they try to have sex, and while he likes her boyish legs, he can't achieve orgasm with her) Elena seems to commit herself to a life with Pierre.  Our only happy ending today!
Posted by MPorcius at 8:17 PM

Email ThisBlogThis!Share to TwitterShare to FacebookShare to Pinterest
Labels: Nin