The Future Is Now conclusion: Dixon, Banks, Russell and Goulart

Here it is, the third and final installment of MPorcius Fiction Log's exploration of William F. Nolan's 1970 all-new anthology of SF stories, The Future is Now.  I own the 1971 Playboy Press paperback edition.

Dixon has only three fiction attributions at isfdb, all three short stories in anthologies.  The intro to this story includes a page-long block of text from Dixon himself, who quotes Vladimir Nabokov, Saul Bellow and Joanna Russ.  Dixon, it seems, intends "Hate is a Sandpaper Ice Cube with Polka Dots of Love on It" as a very hostile parody of New Wave stories (or maybe just bad New Wave stories.)  Dixon, in the intro, suggests the New Wave writers try to shock and impress with violence and sex and with literary techniques which may appear new to SF fans but are in fact old hat, and that they are guilty of inflicting upon readers bad poetry, hollow profundity, current slang and ideas which purport to be revolutionary but are in fact banal.

The four-page story itself illustrates Dixon's complaints, employing a multitude of different typefaces and bad puns and absurdist wordplay and references to religious figures, hemorrhoids, unappealing sex and disastrous mother-son relationships.  Lampooning the excesses of innovative literary and art movements is an old game and not a particularly difficult one, but it can be fun (I enjoyed the beatnik scenes in A Bucket of Blood, for example) and Dixon here made me laugh, so I am giving "Hate is a Sandpaper Ice Cube with Polka Dots of Love on It" a thumbs up! 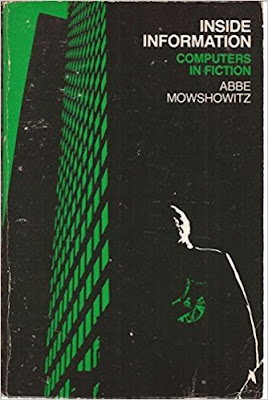 Nolan in his intro warns us that "Walter Perkins is Here!" is "surreal," and it is certainly pointless, generating zero interest and zero emotion.  I hope Banks's pornography is more stimulating than this thing.  In the future everybody carries around a little receiver like an ear bud and can put it in his or her ear to receive sage advice from a supercomputer on every issue great or small.  The computer makes everybody's life smooth by managing careers, sexual relationships, and everything else.

Our protagonist Perkins decides to start ignoring the computer one day, apparently on a whim.  He gets picked up by an ambitious local politician who (somehow) turns Perkins into a celebrity and inspires everybody in the world to stop working and to party all day, every day.  Society will keep on humming because it is the computer who produces food and maintains the roads and so forth.  The pol becomes president.

A waste of time.  For some reason this slice of nothing was included in Abbe Mowshowitz's Inside Information, which I guess is some kind of college textbook on literary explorations of the effect of computers on society, or something.

"The Darwin Sampler" by Ray Russell 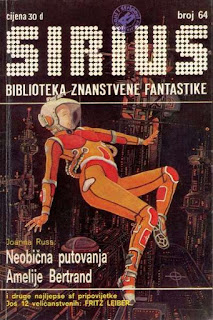 Look, it's our old pal Ray Russell with a two-page story.  Nolan's intro here offers a lot of info about Russell; for one thing, our pal Ted White (I actually do like White's fiction and non-fiction, and his work as an editor, so this use of "pal" is not a sarcastic gibe) thinks Russell was Playboy's best ever editor.  Also, Russell wrote the screenplay for X: The Man With X-Ray Eyes!

In the future of the 1990s, pollution is so bad that scientists have developed a drug that can be injected in people so that they can safely breathe, even thrive on, polluted air.  This drug is administered universally, but nostalgic types want to experience clean air, and procure tanks of oxygen.  They are in for a terrible surprise when they strap on their oxygen masks and their adapted bodies reject the clean air!  Russell structures his tale as a police detective procedural following two flatfoots investigating a death, and we readers don't get the explanation of the setting until the end.

An inoffensive gimmick story that succeeds in its object.  "The Darwin Sampler" was translated for inclusion in Sirius.

"The Whole Round World" by Ron Goulart

I have always avoided Goulart because I associate him with SF stories that are supposed to be funny as well as books that are adaptations of comics and other media properties like Battlestar Galactica, TekWar, sexy sexy Vampirella and sexy sexy Flash Gordon.  (Women find Flash Gordon sexy, right?)  But today I am embarking on this 68-page story by Goulart in the interest of squeezing every last drop out of The Future is Now.  Nolan spurs me on by telling me that Goulart is like Hemingway and by quoting Avram Davidson's assessment of Goulart as a "mordant" Swiftian who "kills cliches."

"The Whole Round World" starts off as a satire of Hollywood TV production set in a chaotic future world in which the United States military is fighting leftist guerrillas in Latin America; meanwhile, China has just nuked India into oblivion.  A computer predicts that a Tarzan-style TV show will win big ratings so a network exec commissions one, but black activists have just burned down the studio's jungle set (Tarzan be racist, yo), so our hero, assistant Tim McCarey, is dispatched to the walled estate of a rich old guy, Vincent Belgraf; Belgraf is a botany-fan who has a few hundred acres of transplanted jungle on his estate, and it is hoped that the TV peeps can rent some of it for filming.

(Don't worry overmuch about the racial politics of this story, young people--two pages after the blacks burn down the studio lot a white left-wing terrorist group named "The Pallbearers" blows up some android police as well as some private property.)

Over 50 pages of "The Whole Round World" takes place on the Belgraf estate, and Tim's time there reminded me of Sunset Boulevard.  The estate is inhabited by a bunch of wacky characters, including a gorilla, and the Belgrafs enlist Tim's aide in writing their PR copy.  Forged correspondence plays a role in the plot, as does Tim's being the object of two women's desire.

Vincent Belgraf's nephew Clem, a former "stock-plane racer," aspires to solve the unrest afflicting the United States by taking over the country and crowning himself Emperor.  Once Emperor, Clem plans to solve the unemployment problem through public works projects, primarily the construction of concentration camps where will be interned Chinese, Japanese, Russians, and, of course, Jews: "You really can't have a concentration camp without them."  When Tim arrives Clem is still debating whether blacks should be put in the concentration camps or just exterminated: "...none of the other inmates would want to be in the same concentration camp with Negroes.  You can't blame them for that.  Building separate but equal concentration camps may prove too costly."  Clem needs an army to take over the country, and has been recruiting and training one on the grounds of the estate.  This would-be Bonaparte has already suffered a mutiny among his troops, and during that bit of unpleasantness was so severely injured that his doctor had to transplant his brain into another body--human bodies were in short supply, so, when Tim meets him, Clem's brain is lodged in the body of the gorilla from his uncle's private zoo.

The plot meanders around, focusing on a love triangle: femme fatale Laura, Clem's sister, tries to seduce Tim, but Tim is more interested in Carrie, a secretary who is being blackmailed into working for the Belgrafs.  Finally, there is a second mutiny (not due to any actions of Tim's--Tim does not drive the plot of this story) and Clem is overthrown.

"The Whole Round World" isn't abysmal, but it is a waste of time.  It fails as a humor piece because few of the jokes are funny and the satiric jabs at Hollywood and political extremists are banal and perfunctory.  It fails as an adventure or drama because it is too silly for any suspense or excitement to develop and because Tim and Carrie are characters who lack personality and do little.  The most interesting characters are the villains, Clem, an ambitious man stuck in a gorilla's body who grows increasingly insane as the story progresses, and his horny sister who is always seductively touching her own breasts, because they have powerful motivations and try to accomplish things despite insuperable obstacles, but they don't dominate the narrative enough to make the story engaging.

Let's rank the stories in The Future Is Now from best to worst and break them into three broad categories of Good, OK and Bad, even if directly comparing stories with very different aims--the traditional character- and plot-driven stories like "Earthcoming" and "Damechild" with brief literary experiments like "Hate Is a Sandpaper Ice Cube with Polka Dots of Love on It" and "Belles Lettres, 2272," for example--is questionable:


THE FUTURE IS NOW SCORECARD


GOOD
"Earthcoming" by Richard C. Meredith
"The Ogress" by Robert F. Young
"Hate Is a Sandpaper Ice Cube with Polka Dots of Love on It" by Terry Dixon

Erudite blogger marzaat encouraged me to read The Future Is Now, and I do not regret doing so; I enjoyed some of the stories and if I didn't like some of them, well, they were by authors important enough to the SF field that it is valuable to have some familiarity with their work.

Back in 2014 marzaat reviewed The Future Is Now, and now that I have committed my own opinions to pixels I am curious to see to what extent we agree and disagree on its contents.

It looks like for the most part we are seeing eye to eye on the stories in The Future is Now.  One big point of disagreement is Terry Dixon's "Hate Is a Sandpaper Ice Cube with Polka Dots of Love on It."  I actually found it funny, and it seems that marzaat did not.  Marzaat suggests that Dixon's main target in his satire may be Harlan Ellison, which did not occur to me.  Now that I think about it, Dixon's long and self-important introduction to his own story is reminiscent of Ellison, but I'm not sure the actual story is, though I have read only a small portion of Ellison's massive oeuvre.  Marzaat is probably more familiar with Ellison's work than I am.  Marzaat also must be more familiar than I with Alfred Bester; he suggests that the odd prevalence of typographic symbols and pictographs in the stories in this anthology may be due to the influence of Bester.

"A War of Passion" was the first story by Tom Purdom I have ever read, but marzaat has read many of his stories and, in a separate blog post, has an interesting analysis of  "A War of Passion."  Marzaat has actually written a number of posts on Purdom, part of his project devoted to looking at all of Purdom's fiction.

Marzaat's blog is definitely worth a look for SF fans, and he has a wide range of additional interests, offering insightful reviews of books on economics, for example.  Check it out!

So we bid farewell to The Future Is Now and those photos of dolls (there really never was a story that made the cover feel appropriate, was there?)  In our next episode, another book somebody encouraged me to read via the interwebs!
Posted by MPorcius at 5:32 PM