"Did you know that every tenth planet, roughly, in the Zarmithian Empire has a Star Games arena of one sort or another?  I didn't, but that's over seventy arenas.  A hundred thousand lives a month....They're restocking from Kalvar." 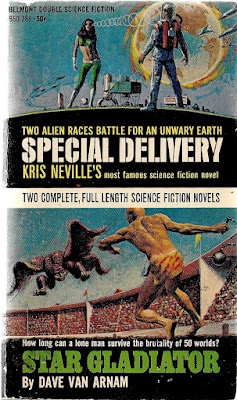 Last week I stopped by Karen Wickliff Books, the terrific used book store on High Street in Columbus, Ohio, mere miles from MPorcius Fiction Log's current MidWestern HQ.  There I pored over the SF shelves and the wall of unsorted paperbacks, and discovered a treasure from our friends at Belmont, a 1967 Belmont Double featuring Kris Neville's Special Delivery and Dave Van Arnam's Star Gladiator.  The cover is irresistible, with its fun fonts, extravagant and exuberant tag lines, and its illustrations chock full of so many classic ("shopworn" to you cynics!) SF elements, but the contents were also intriguing.

Now, I've already read and praised Neville's Special Delivery at this here blog, but Van Arnam I know nothing about.  He doesn't have a lot of publications listed at isfdb, but he seems to have been a committed SF fan (he wrote an article entitled "How I Learned to Love Fandom" for the NyCon3 Program and Memory Book) and an expert on Edgar Rice Burroughs.  He also co-wrote some novels with Ted White, whom I like (one reason I spent all that money on ebay for all those issues of Fantastic is that I find White an interesting character.)  So, I have plenty of reasons to read Star Gladiator, which first appeared in printed form in this very Belmont Double and since then no place else (there is, however, an electronic version with an embarrassing CGI cover that seems to be channeling the Herald of Galactus.)  Science fiction is full of people getting thrown into the gladiatorial arena--let's see what Mr. Van Arnam does with this classic ("hackneyed" to you blase types!) theme.

It is the future and humankind has spread throughout the galaxy--men reside on a million or more planets, divided into numerous empires.  One such empire, of over 700 planets, is that centered on planet Zarmith II.  The Zarmithians are a real bunch of jerks who have been expanding their empire by conquest for centuries, largely to enslave people so they can throw them into their gladiatorial arenas to be murdered by beasts or celebrity pro gladiators. 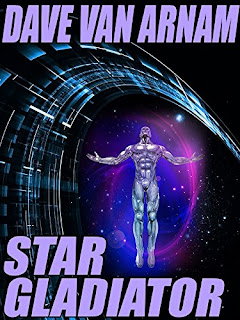 Our hero is teen-aged Jonnath Gri, son of an important member of the Grand Council of the independent planet Kalvar, a planet with high gravity where everybody is physically strong.  (Shades of John Carter, whose success on Mars was partly the result of being born and bred on higher-gravity Earth.)  The novel begins when the Zarmithian military conquers Kalvar in a lightning quick attack, the Kalvarans lacking weapons that can penetrate the Zarmithian force fields.  The Zarmathians exterminate the Kalvaran leadership, but capture much of the population alive to throw into the arena!  Jonnath, his girlfriend, and his girlfriend's little sister escape extermination by hiding in a vacant mansion, where they find rifles and pistols which they use to stave off attacks by members of the Kalvaran lower classes, who are using the catastrophe as an opportunity to engage in a little looting!  Unfortunately, all that shooting draws the attention of the Zarmithian troops and by Chapter 3 (Star Gladiator has eight chapters that span like 88 pages) Jonnath is in the arena on planet Changar and his fiance and prospective sister-in-law are in parts unknown!

When Jonnath's dad wasn't calling for an independent prosecutor or legislating subsidies for his friends in the tech industry or whatever it is that a Grand Councilor of Kalvar does, he was training Jonnath in hand-to-hand combat, so Jonnath is a success in the arena and soon becomes one of those celebrity gladiators.  After three years of fighting every week for the pleasure of both live in-person violence fans and those who prefer to enjoy their gore in the comfort of their homes via the TV, Jonnath is elevated from the small Changar Arena to the big leagues on planet Tansavar.  On Tansavar he meets a bunch of other Kalvarans, who, like him, have become successful pro gladiators.  Jonnath has to decide if he will join their conspiracy to take over the planet, or, if he will seek his freedom "by the book": if he can defeat a series of especially difficult opponents in the arena at the annual High Games, the Zarmithian spectators will grant him his freedom.  Complicating matters is the fact that, on Tansavar, Jonnath has befriended an alien genius whom everybody else thinks is a dumb beast, and this genius has an agenda of its own. 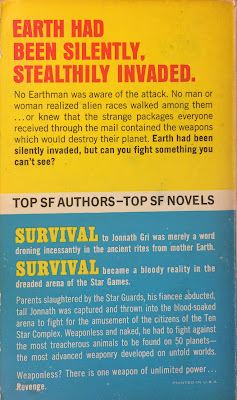 This is an entertaining enough sword and planet kind of thing.  The action scenes are not bad, and Van Arnam tries to give the secondary figures little idiosyncrasies that add up to interesting personalities. At times I thought Van Arnam might be trying to emulate Jack Vance--there is an elaborate meal and Van Arnam lists all the weird courses, and symbolic attire also plays a role in the story.  In the last quarter or so of the piece, after Jonnath has won his freedom, he goes full Kirth Gersen, doing detective work to locate the Zarmithian soldiers who killed his family on Kalvar so he can get revenge on them.

A problem with Star Gladiator is that Van Arnam seems to have tried to cram 150 or so pages of material into the 88 pages he had available to him, so some ideas and portions of the story feel rushed or merely glossed over.  (The alien genius who looks like a beast of burden, for example, doesn't really play any role in the plot.)  The wikipedia article on Donald Wollheim, architect of the famous and much-adored Ace Doubles, says he sometimes chopped up some writer's novel to make it fit the Double format, and one wonders if somebody at Belmont took an axe to Van Arnam's piece here.

As longtime readers of this blog know, I like these kinds of adventure stories, and if I see any of Van Arnam's books in my travels (for the low low price I paid for this one), it is likely I will pick them up.

At the back of Belmont's Special Delivery/Star Gladiator are three pages of ads, including two pages listing many speculative fiction and Fortean titles available from Belmont (plus a "handy reference" to the bon mots of Marilyn Monroe's most famous conquest and a guide to how to find buried treasure.)  Of the books listed (besides Special Delivery and Star Gladiator), I've read Murray Leinster's Space Tug (at Gutenberg.org), Doomstar by Edmond Hamilton (in a 1979 reprint edition), Doomsman by Harlan Ellison, and my beloved Novelets of Science Fiction. which I like to think of as "The Book of the Year."  There are plenty of Belmont books listed which I have not read and would probably snatch up if I saw them by authors like James Schmitz, Kris Neville, Lin Carter, Ted White, Robert Bloch, or with crazy titles like The Throwbacks and The Cosmozoids.  It is good to know that, out there in the world's used bookstores, there are still so many treasures waiting for me to uncover them!