The Creature From Beyond Infinity by Henry Kuttner

"The Carriers kill instantly by touching their victims.  Lead-plated suits are being issued to the guardsmen, but these do not always work.  It depends on the quantity of energy emitted by a Carrier.  Dynamite has been placed at the New York bridges and tubes.  The mayor is ready to isolate Manhattan, if necessary, for protection." 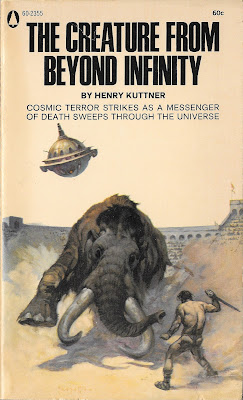 I recently purchased a 1984 printing of Barry N. Malzberg's The Engines of the Night at Karen Wickliff Books.  This collection of doom and gloom essays about how SF writers are underpaid and machines are devouring the human spirit and SF fans are creeps is dedicated to Mark Clifton, Edmond Hamilton, Cyril M. Kornbluth, and Henry Kuttner.  Hamilton of course lived a long life (died age 72) and produced a multitude of work, but Clifton, Kornbluth, and Kuttner died relatively early in their careers, and our pal Barry, in his characteristic way, suggests in his essay "Mark Clifton: 1906-1963" that "the death certificates of all three should have listed science fiction under cause of death."

Let's check out a tale Kuttner published in Startling Stories in 1940, eighteen years before that grim reaper SF cut him down at the age of 42: A Million Years to Conquer.  A Million Years to Conquer was reprinted in 1952 in Fantastic Story Magazine, and then in book form by Popular Library in 1968 under the title The Creature From Beyond Infinity.  (The 1968 title really does not jive with the story.)  I own one of those 1968 paperbacks, and it has a great Frazetta cover, featuring a guy fighting a wooly mammoth in the arena, watched (?) by a sort of flying sphere.  (As we know, being thrown into the arena to fight to the death is the fate of many a science fiction character!)  Looks awesome, let's go!

(The 1952 issue of Fantastic Story including A Million Years to Conquer is readily available to my fellow cheapos at the Internet Archive website.  Marvel not only at Kuttner's novel and the accompanying Virgil Finlay illos, but also the fun ads for books (I Killed Stalin by Sterling Noel), magazines (16 issues of Ranch Romances for only $3.00!) and essential medical aid!) 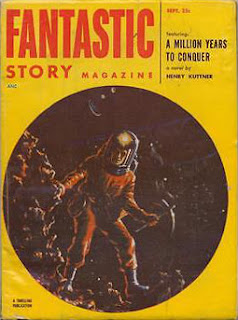 Beautiful planet Kyria was doomed!  A small group of citizens built a spherical starship and fled their home world to seek out a new planet fit for human habitation. After spending long years investigating hundreds of useless planets and laying in suspended animation between planets, the Kyrians finally discover Earth.

At the very moment of their success the members of the expedition face two big problems!  One: they crash on Earth and only two people survive the disaster, expedition commander Theron and young Ardath, who was born in space and never saw Kyria with his own eyes.  Even worse, two: New York City hasn't been built yet; in fact, nothing has been built on Earth yet!  As Theron tells Ardath, Earth is a young world as yet only inhabited by single-celled organisms!  Thankfully, Theron is an optimist who takes the long view, and he tells Ardath that human beings will evolve from those single-celled creatures, some day, and Ardath should wait for them to appear. Then he should find two genius Earthlings and breed them to create a super race--this was how Kyria got so advanced, after all, through a eugenics program that bred "mental giants" until all Kyrians were at the genius level!  Having shared his wisdom, Theron dies of his crash-related injuries.

(Eugenics, of course, is a dirty word today, but in the first half of the 20th century many of the smarty smarties like John Maynard Keynes, politicians like Teddy Roosevelt and Winston Churchill, and political activists like Margaret Sanger who are widely revered today were in favor of eugenics of one type or another.  So let's not judge poor Theron and Ardath too harshly!)

Like that lovely young couple Stevens and Newton did when they got marooned on Ganymede in 1931's Spacehounds of the IPC, Ardath excavates from his surroundings the ore, chemicals and energy (from steam--there are no fossils yet, so no fossil fuels) he needs to fix his ship.  Then he goes into orbit and into suspended animation to await the rise of mankind on Earth.  (I'm sure you remember how Neil R. Jones and Cordwainer Smith used this suspended-animation-in-Earth-orbit gag.) Periodically Ardath wakes up to check on Earth's progress, and to advance it, nudging the dinosaurs toward extinction, for example, and providing primitive man with fire, archery, the techniques of smelting iron and raising crops.  When mental giants appear he kidnaps them and carries them back into orbit; from various antediluvian Conan-style settings (remember, Kuttner was part of that Weird Tales circle that included Robert Howard and H. P. Lovecraft), as well as the Roman Empire--as Frazetta's cover illustrates, Ardath snatches a guy right out of the arena!--he seizes ambitious fighting men, an obese Chinese sage, a beautiful priestess of Dagon, and a merciless queen. Some of these selfish ingrates are not too happy about being whisked away from Earth and asked to spend the next thousand or so years in suspended animation, and they conspire against Ardath. 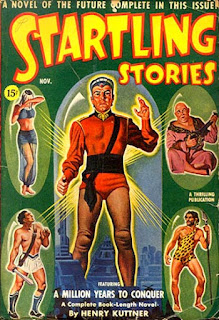 The novel's first eleven chapters switch back and forth between Ardath's adventures in ancient times and the early 20th century, where we meet a true super intellect in America's Middle West.  Kuttner and his wife and ofttimes collaborator C. L. Moore regularly write about ruthless children and manipulative homos superior, and little Stephen Court is another example.  Already equipped with encyclopedic knowledge and the ability to hypnotize people en masse, eight-year-old Court ditches his parents in 1924 to ride the rails with a hobo he hypnotizes to act as his guardian.  By 1941 Court, an emotionless man whose only love is knowledge, is "the greatest scientist in the world" and maybe the richest, thanks to a series of inventions he dashes off without breaking a sweat.

A mysterious plague begins turning people into glowing apparitions that feed on energy and are invulnerable to gunfire!  While trying to figure out the origin of this scourge Court detects Ardath's orbiting starship.  Even Court's super duper brain can't solve the problem of the plague with Earth science, so he invents a spaceship to go scavenge alien technology from Ardath's ship.  On page 75 of the 125-page novel Court enters the ship, where he finds in charge of the vessel not his fellow master of science and engineering, Ardath, but one of those ancient warriors, Thordred the Usurper!

Thordred sends the incapacitated Ardath on what he hopes will be a one-way trip to the sun, and the rest of the people on the ship split into two factions: the priestess of Dagon sticks with Thordred, while Court, the Chinese, and the Carthaginian gladiator join together.  (Thordred murdered the queen long ago.)  Resigned to the fact that the plague is going to kill everybody on Earth, Thordred decides to capture a bunch of people to take to another planet where he will build a new civilization with himself as dictator.  Court and his new friends escape to an evacuated post-apocalyptic Manhattan, where the garbage-strewn streets are haunted by the luminescent Carriers of the plague whose merest touch is death!  Faced with so much danger, death and destruction, the callous Court suddenly changes his tune, becoming filled with a love for humanity!  He even realizes he is in love with his lab assistant, who is back home in Wisconsin! 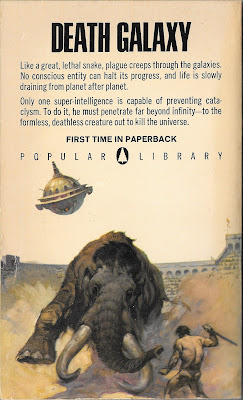 Court's multicultural party escapes New York, Ardath escapes being immolated in the sun, and together with Court's lab assistant they defeat Thordred in Wisconsin, figure out what is going on with that plague, and under the aegis of the world's governments manage a colossal public works project which puts an anti-plague shield around the Earth and gets all the people of the world to put aside their petty differences and live in harmony. Ardath abandons Theron's whole eugenics program and, with the gladiator and the Chinese, sets out to explore the universe in hopes of finding another planet with a hospitable environment.

The Creature From Beyond Infinity / A Million Years to Conquer is a quick and fun read, full of briefly sketched but engaging characters (the mad scientist who turns good, the scheming coup plotter, the warrior driven by a desire for revenge) and lots of cool SF themes and gadgets (e. g., Thordred is a real threat to Ardath and Court because he uses a brain reading device to transfer all of their personal and scientific knowledge into his own scheming skull.)  The story is full of science, like these old SF stories often are, and as is often the case, the science can be pretty sketchy--Kuttner portrays evolution as a direct march to some predictable ultimate form of life, for example.

A great specimen of Golden Age SF adventure.
Posted by MPorcius at 1:30 PM