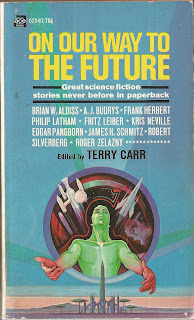 Let's take a look at Terry Carr's 1970 anthology On Our Way to the Future, Ace 62940.  The little bio at the start of the book tells us Carr lived in Brooklyn with his wife Carol, also a writer in and out of the SF field, and reminds us of his collaborative work with Donald Wollheim.  Oh yeah, and that he and Carol had two cats, Gilgamesh and George.  Meow!

We've already read the story by Kris Neville in On Our Way to the Future, as well as James Schmitz's contribution, "Goblin Night;" today let's look at the included pieces by Edgar Pangborn, Algis Budrys and Philip Latham (the pen name of professional astronomer Robert S. Richardson.)

No doubt you remember when we read Pangborn's novels Davy and West of the Sun. Let's see what he does in a shorter format. 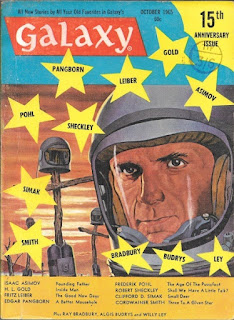 "A Better Mousehole," which first appeared in a special issue of Fred Pohl's Galaxy, is written in the voice of the uneducated bartender of a little hick town.  He speaks in a kind of redneck dialect ("The back room gets lively Saturday nights, and I ain't been sweeping up too good, last couple-three weeks"), saying "desecrator" for "decorator" and "thermostack" for "thermostat" and misattributing cliches to the Bible and that sort of thing.  Through the medium of his garbled text we learn all about the various wacky characters in this little town and their strained relationships with each other.  We also learn the plot of the story, somewhat obliquely.  One of the town's inhabitants is a wealthy intellectual who will leave his decaying mansion for months at a time to explore unpopulated corners of the world.  From his most recent trip he brought back to the little town a basketball-sized blue sphere which turns out to be the vehicle of tiny alien invaders!

These aliens, whom our narrator calls "blue bugs," are sort of interesting.  Those they bite have wonderful dreams; being bitten also seems to improve a  victim's mood.  It is hinted that the "bugs" might be able to make the world a better place by rendering people more mellow... but there are also clues that suggest being bitten drives some to insanity, murder, even death.  I compared Pangborn's novels to the work of Theodore Sturgeon, and the possibility that alien invaders might improve human society, as well as references to love and sex in "A Better Mousehole," also brought Sturgeon to mind.  [UPDATE 12/6/2016: In the comments ukjarry sheds light on the Sturgeon-Pangborn connection!]

The plot of "A Better Mousehole" is basically straightforward traditional SF stuff, but Pangborn gussies the story up by having it told via an idiosyncratic and unreliable narrator and by not telling the story in strict chronological order.  I found it entertaining.

When it first appeared in If, "Be Merry" was billed as a "complete novel" and it takes up like 50 pages of On Our Way to the Future. 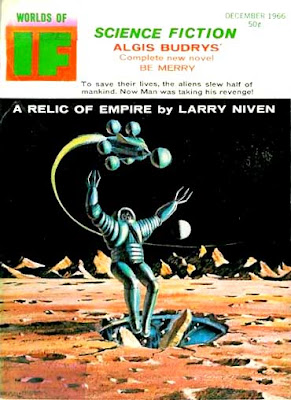 This is one of those post-apocalyptic jobs, but has elements of hope as well as descriptions of ruins and sickly people and depictions of the ruthlessness of people who have been pushed to extremes.  And it takes place in my home state of New Jersey, with a description of a typical Jersey Shore town and references to Route 46, with which I am very familiar, and WOR, one of the radio stations I listened to during my four years of driving between home and Rutgers and then three years driving between home and the kind of job my RU history degree had prepared me for, earning minimum wage at a bookstore.

The background: Space alien lifeboats crash landed on Earth in the 1960s; the aliens were friendly, but carried diseases that killed most of mankind.  The aliens themselves were in turn made ill by Earth germs.  Human society collapsed, but the survivors have been slowly rebuilding a tolerant multi-species society.

The plot: Evidence reaches a center of the fledgling new society that there is a New Jersey town which is surprisingly healthy (of all the outposts of survivors, it is the only one which isn't always requesting drugs and medical supplies.)  Our narrator, a human, and his partner, an alien, are sent to investigate this mysterious town.  What they find could lead to their deaths, or the kind of paradigm shift we often see in classic SF stories, the solution to the problems plaguing the new civilization!

I have been very hard on Algis Budrys' famous novel Rogue Moon, but I liked his novel Man of Earth and I also like "Be Merry."  The writing style is good, there are engaging ideas, and all of the numerous characters play a role in the plot and feel "real:" they are interesting, have believable motivations and act in a logical manner, and the reader can identify with them; none are incredibly virtuous or cartoonishly evil.  Budrys actually had me wondering how the story was going to turn out, and actually caring how it turned out. 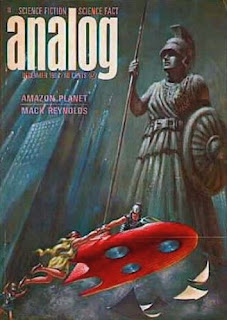 This is a humor story about an astronomer who is an arrogant jerk.  He works at a county planetarium near Los Angeles and is sick and tired of having to be nice to the taxpayers who pay his salary and having to listen to all the dolts and cranks who call him and write him with their dumb questions and crazy theories.  Most of the story's fifteen pages is this kind of comedy material.  When he is not complaining or running the projector, the astronomer finds time to do lots of calculations about an asteroid.  His calculations indicate that the asteroid is going to strike Los Angeles and cause "more devastation" than would a strike by "many thermonuclear weapons."  Instead of getting upset and calling Washington or other scientists for confirmation of this terrible news, he treasures the discovery to himself!  He's gone mad!

"Under the Dragon's Tail," first published in Analog, is not bad.  I guess it is sort of funny, and the author includes classical references, Shakespeare references, and plenty of stuff about astronomy and the operation of a planetarium, so it keeps the reader's interest, while the question of whether we should identify with the protagonist or deplore him provides a little ambiguity and tension.

These three stories were all worth my time; Carr made decent selections here.  There are several more stories in On Our Way to the Future by writers I care about, so it is very likely we will return to it in the future.
Posted by MPorcius at 10:55 AM