Assault on the Gods by Stephen Goldin

"The gods claim to be good, yet I've seen them do some things that even they say are bad.  They claim to be wise, yet sometimes they act foolishly.  I'm learning very quickly not to believe everything the gods have told me." 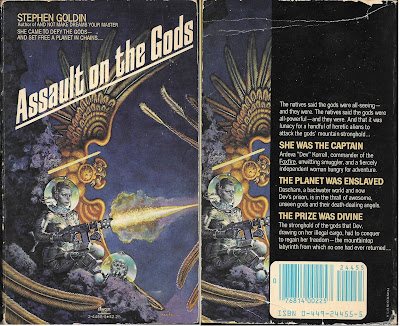 Back in 2012 I read Stephen Goldin's 1981 novel A World Called Solitude and gave it a positive review on Amazon.  Since then I've read three Goldin short stories, two good, one bad.  So Goldin's name is always rattling around inside my skull, and when I spotted the 1977 Fawcett paperback edition of Assault on the Gods with a striking Don Maitz cover (I love the faces and the weapons) I picked it up.  I was intrigued by what I presumed to be the in-your-face political content of the book, not just the promised "fiercely independent" female protagonist but the anti-religious slant. Goldin, on his website, tells us "we're living in scary times. The Religious Right is trying to form a band of thought-police and turn America into a theocracy. Nothing less than the freedom of thought is at stake, and I refuse to be silent."  Let's see if Goldin strikes any telling blows against the "fanatical Xtians" he envisions are trying to "cram their puritanical dogma down our throats."

Space Captain Ardeva Korrell is a member of what in grad school we called a marginalized population; not only is she a woman (she provides evidence that fewer than 2% of space captains are women) but an Eoan.  Planet Eos is the most rational and sane human society in the galaxy--Eoans are "beyond morals" because they are so wise.  ("Anthropos [the founding guru of the Eoans] saw morals as arbitrary rules imposed by Society on its less mature members....") This gives Eoans a reputation for arrogance and snobbery.  In the first dozen pages of the story Korrell complains that prejudice has held back her career, that crewmen don't obey her, that she is making less money and getting less respect than she deserves, and that employers are always making passes at her.  Am I reading a SF novel or an article from Ms.? 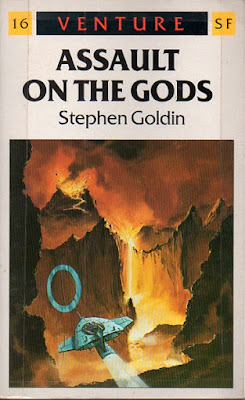 The cargo ship Korrell is currently commanding is stopped on planet Dascham, where the illiterate natives look like teddy bears and live in filthy huts. (For the record, Assault on the Gods appeared six years before Return of the Jedi, but over 25 years after the first appearance of Poul Anderson and Gordon Dickson's Hoka stories.  I have to admit that if the paperback had a teddy bear instead of gunslinger girl on the cover I would not have picked up Assault on the Gods.)  The natives are mired in poverty and primitivism because of their stifling religion.  When a drunken member of Korrell's crew denies the existence of the gods of Dascham he is struck dead by lightning and a 12-foot tall glowing teddy bear angel with a flaming sword flies down to upbraid the survivors.

The Daschamene "gods" are in fact aliens who maintain a totalitarian rule over the natives, ruthlessly controlling population levels, forbidding technological development, outlawing dissenting speech and exploiting them as slaves.  An extensive network of listening devices keeps the natives under surveillance and the "angels," in reality war robots, inflict swift and merciless punishment.  When one of the natives, disillusioned with the gods, sneaks onto Korrell's ship looking for help in overthrowing them, Korrell's boss, the ship's owner, decides to exterminate the gods and liberate the natives, primarily in hopes of reaping a considerable monetary reward offered by the dissident. Korrell reluctantly goes along with this terribly risky (their ship is not a naval vessel but an unarmed merchant ship, after all) scheme.

The ship is shot down in the attack, and Korrell and her small crew must resort to fighting on foot with laser rifles and grenade launchers.  They climb a mountain, penetrate the gods' fortress, defeat their army of robots, and uncover their secrets, among which is the fact that the gods are mentally and physically feeble.  Fortunately Korrell and company discover an ancient starship in the gods' stronghold so they can escape the planet, though not before Korrell's employer becomes drunk with greed and power and tries to succeed to the place of the defunct gods, necessitating that Korrell execute some rough justice on him.

Assault on the Gods is s pretty good space opera/hard SF story, full of fun descriptions of space equipment and weapons, plenty of scenes of our heroine using logic and technical knowhow to get herself out of sticky situations, and tense scenes of human-alien interaction, both diplomatic and combative. The structure and plot elements of Goldin's novel strongly remind me of something by Poul Anderson; the protagonists are business people, like Van Rjin and Falkayn, not government employees, and their struggle is against stifling tyranny. (Goldin also does the same thing that other icon of libertarian SF, Robert Heinlein, does, arguing for freedom and individualism as well as for the seemingly paradoxical idea that on a ship the captain's word is irresistible law.) Goldin's style is good, the pace is fast, and the book feels short (it's like 180 pages of text, but the print is pretty large.)  The anti-religious sentiment and boilerplate feminism (which will inspire cheers from some and eye-rolling from others) don't overwhelm the narrative--the feminist talking points rarely make an appearance after page 20 or so, and the anti-religious stuff, while pervasive, is pretty broad and vague; Goldin doesn't really single out Christianity or any other religion, unless we count the "neo-Buddhist" member of the crew, who is characterized by passivity.

One "problem" with the novel is that Korrell is smarter, more sophisticated, more courageous, more compassionate, and more ethical than all the other characters. Since we see this sort of shortcoming in so much of popular fiction, from Sherlock Holmes to John Carter to Kal-El to Conan, we can hardly hold it against Goldin here.  Should we see Korrell's superiority as representing some better way of life, the way we sometimes see Conan as representing the (alleged) superiority of the barbarian over the civilized man, or Superman representing "the American Way?"  Presumably she represents the superiority of the rational individual over the ignorant and superstitious masses of society and the selfish and manipulative religious and/or government establishments which exploit them. 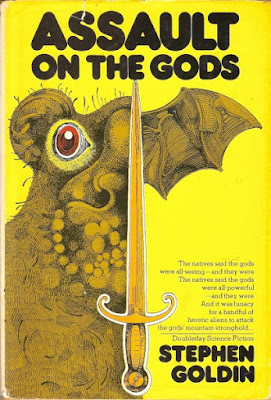 Korrell is perhaps worthy of some kind of feminist analysis.  She plays exactly the same role in the story we often see men play in adventure stories--she is the leader, she solves the intellectual puzzles and overcomes the physical obstacles and enemy combatants, and represents the author's ideological point of view. Goldin seems to have consciously refused to give her any of the kind of attributes we typically associate with women.   Korrell doesn't seem to care much about her looks or her clothes and is a poor cook.  She doesn't express interest in sexual relationships or family relationships (she seems to have been brought up in some kind of orphanage or barracks on Eos, but it wasn't clear to me whether this was due to special circumstances of her life or if all Eoans are raised in such communal institutions).  She loves to read but seems to read popular science texts, not fiction (though she does refer to The Wizard of Oz. The love for Baum we see in so many SF writers--Heinlein and Farmer come to mind at once--is making me think I have to read Baum.)  Whether women will appreciate this depiction of a career woman who has no (apparent) thoughts of love, children or fashion, or find it to be a flat, unrealistic and unconvincing depiction of what women are like, I have no idea.

Another interpretation of Korrell and the novel that I toyed with as I read Assault on the Gods was Korrell as a strict and long-suffering mother and the crew as her unruly children.  Again and again Korrell orders the crew around, scolds them or punishes them for misbehavior, pulls them out of trouble, assesses their strengths and weaknesses and tries to guide and manipulate them accordingly.  Evidence for this interpretation includes the way Eoan philosophy stresses how mature Eoans like Korrell are while other humans are essentially immature.

A good space adventure; I enjoyed it and suggest Assault on the Gods is worth the time of hard SF fans and those interested in anti-religious SF and SF "with a strong female protagonist," as they say.  Maybe I should keep my eye open for other books by Goldin.
Posted by MPorcius at 2:21 AM