Siege of Earth by John Faucette

"Remember this, Yellin: the race of man is vicious, revengeful, self-righteous and sadistic.  It will stop at nothing for vengeance.  We did not start this war--but that will not matter to future Terrans who shall seek only vengeance.  They shall see only defeat, not the reason for the war that brought defeat."

As I noted in my blog post about its predecessor, Warriors of Terra, I purchased the 1973(?) paperback edition of John Faucette's 1971 novel Siege of Earth because of the terrific cover art by...who is it by? There is a signature, but I can't really decipher it...Alway?  Chang?  Clancy?  Curse my bad eyes!

Bad eyes or good, I adore the cover painting--the colors, the robot/lander/eye thing, the brains, the planet which is glowing or exploding or something, the number "10," the whole package.  And don't ask me why the background figures cast a shadow and the foreground figure does not!  True love embraces such idiosyncrasies!

I pointed out a lot of flaws in Warriors of Terra, but I was still interested enough in Faucette's story and themes to read this sequel.  In particular, I hoped to find out what happened with Battle of Ran Hudson's career as ruler of the Commonwealth of Peaceful Species.  Ran, after escaping slavery among the Morg (the main plot thread of Warriors of Terra), had worked his way up to the top position in the galaxy, but during his tenure the Commonwealth was faced with dangerous enemies both foreign and domestic.  Could Terra survive?  (The text of Warriors of Terra strongly implied it might not!)

Ran's military and political career took place after the Terra-Sparta War; in fact, Ran was a child during that war, sold into Morg slavery by Spartans.  I was a little surprised, then, to find that Siege of Earth begins during the Terra-Sparta War, with the Earth surrounded by Spartan fleets, ten years before the main plot of Warriors of Terra has even begun.  Ran is not even mentioned in Siege of Earth!  Maybe Ran's tale was to be continued in an unpublished third volume of the Peacemakers series. Wikipedia, an article at blackpast.org, and Faucette's obituary at sfsite.com indicate Faucette had written several novels which he was unable to sell to publishers, including one called Earth Will Be Avenged--maybe Earth Will Be Avenged is the third Peacemakers book?

Anyway, this novel confines itself to the siege mentioned in the title.  I described Warriors of Terra as a space opera; I think Siege of Earth is perhaps better described as "military SF."  All the characters serve in the Terran or Spartan militaries, and the book reads like a military history.  At the start we get info on how many ships and personnel each side has, and little biographies of the commanders of the various units--this reminded me of the second book of The Iliad, when Homer describes each of the leaders of the many Greek contingents.

In fact, Siege of Earth follows a structure much like The Iliad.  Again and again the Spartans attack Earth, and again and again the Terrans emerge from their subterranean bases to repel them.  Faucette describes all the different weapons and vehicles, all the tactics and strategies they employ, in some detail.  After much devastation and many deaths on both sides, the short novel ends with a conference between the leader of the Spartan force and the ruler of Earth--the Iliad of course ends with the peaceful meeting of King Priam of Troy and Achilles, the greatest warrior of the Greeks and killer of Priam's son.

In The Iliad we had the moving relationships between selfish jerk Achilles and his fellow Greeks, and between tragic Hector and his family, and the evolution of Achilles as a person.  Siege of Earth lacks such effective use of characters, though Faucette takes a few stabs in those directions.  There are scenes in which the leader of Earth, pacifist turned genius strategist and tactician Dane Barclay, visits his daughter on her deathbed, and then his wife on her deathbed.  We also have a brief scene with an Earth politician who regrets starting the Terra-Sparta War, and the suicide of the leader of the Spartan fleet, whose failure to defeat the Terrans in quick order has put his home world in jeopardy.

We know from Warriors of Terra that Barclay unites the Terran and Spartan empires into one peace-loving empire which launches a crusade against slavery and hereditary rule, but that isn't mentioned in this book.  The final chapter has Barclay lamenting that war is "Man's inevitable destiny," and asking "Must there always be war?" 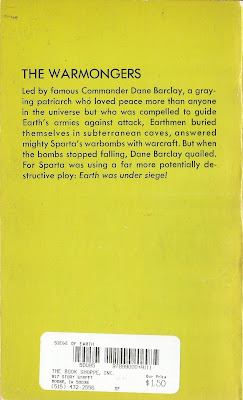 Siege of Earth is an indictment of humanity's bloody propensity for war making.  The Spartans are determined to destroy the human race because it was Terrans who started the Terra-Sparta War and the Spartans have studied Earth history and know how violent we are!  One of Faucette's main themes in the Peacemakers series is the immorality and destructiveness of revenge, and in this book the leader of the Spartan attack force explains to his subordinate, a dude called "Yellin," that if the human race is merely defeated and not exterminated that the Earth will rise again and exact a terrible vengeance!  "...there was no other race quite like Man.  Never had a race been so dreaded."

Faucette filled Warriors of Terra with quotes from intellectuals like Erasmus, Seneca and Samuel Johnson about the folly of war and the desirability of peace; he fills Siege of Earth with references to military history and the history of atrocity: Rome's destruction of Carthage, the American firebombing of Dresden and atomic bombing of Hiroshima and Nagasaki, Rommel, Napoleon, Hannibal, the Holocaust of the Nazis and the arena of Rome.

Another clue to what view of humanity Faucette is trying to transmit to us is the names of Terran space ships.  Dane Barclay's flagship is "ITSN starship Ravisher, one of the Rapist class battle wagons...."  In a later scene the Terrans refurbish a hospital ship called Patcher, tossing out all the medical equipment, installing missile launchers in their place and rechristening her Molester.

I gave Warriors of Terra a thumbs down, and Siege of Earth is no masterpiece.  The style is not very good, with lots of questionable metaphors.  It is hard not to laugh when a Spartan squadron, hit by a laser barrage, is described as resembling "odd-shaped pieces of what Terrans called Swiss cheese."  Here's a description of Terran strato-fighters: "their engines red with the fury of their thrust...like angry bees they buzzed about Yellin's ships, their laser bullets like driven snow in the gloom."  Then there's the bombardment which destroys every city on Terra: "Mushrooms sprouted on the Earth as if the planet were one huge mushroom farm."  Faucette isn't content to employ a tired metaphor merely once; the reader's eyes are offended by the sight of craft like "angry bees," things "lighting up like a Christmas tree," and explosions compared to fireworks multiple times.

On the other hand, I think Siege of Earth is more successful than Warriors of Terra, and am willing to give it a marginal positive review.  It is relatively short and to the point--like an undergraduate's research paper for a class outside his major, the book uses a large typeface and roomy margins.  The passionate, melodramatic, somewhat naive style comes off as more charming than annoying.  And Siege of Earth has a unity of purpose Warriors of Terra lacked.  The anti-war theme is not diluted with exploitative erotic elements or muddled by a contradictory advocacy of an imperialism that stamps out "class societies" among aliens, like it was in the earlier volume.  And all the military stuff, the many different types of weapons, defenses, and combat, are all interesting and well thought out; Faucette achieves a sort of balance between denouncing war and recognizing how and why so many people find warfare fascinating and admire the bravery of fighting men and the skill of great military leaders.  I enjoyed the scenes of apocalyptic futuristic warfare in Neil R. Jones' "Into the Hydrosphere" and Edmond Hamilton's Outside the Universe, and Faucette's massed fleets and devastating missile and laser barrages, and the ground fighting involving infantry and armor, are also pretty cool.

It is unfortunate I won't have a chance to read a third Peacekeepers volume, but I will buy Faucette's other SF novels, Age of Ruin and Crown of Infinity, if I encounter them. I think SF readers interested in space war, in passionately anti-war SF, and in work by black writers, might find Siege of Earth a worthwhile read.
Posted by MPorcius at 1:16 PM