Here we have the concluding episode of my epic reading of Quark/3, a 1971 anthology of experimental SF edited by Samuel R. Delany and Marilyn Hacker.  Delany and Hacker endeavored to present in Quark/3 stories that were not mere "popular entertainment" or "adventure stories" by "commercial science fiction writers," but rather risk-taking work of speculative fiction that was "politically dangerous" and meaningfully addressed "social, psychological and technological crises" evident in the early 1970s.

The first third of the book contained two good stories, those by R. A. Lafferty and Delany himself, while the second third limped along on the strength of an OK story by Kate Wilhelm and a slightly better tale by Josephine Saxton.  What awaits us in this final third?

I recently read Harrison's first Viriconium novel, The Pastel City, and thought it alright, nothing special.

In "Ring of Pain" a man wanders through a Central England devastated by war, scavenging food from the ruins.  Not a single building is intact, and not a single live person is to be seen.  Is he the last member of the human race?

No!  He meets a woman, who is overjoyed to no longer be alone.  She talks of having children with the main character, and our protagonist responds by vomiting and fleeing!  He wants no part of continuing the human race, finds abhorrent the idea of being the Adam of a new civilization which will, no doubt, repeat the grim and catastrophic rise to industrialism and then industrialized, world-shattering war.  The woman eventually catches up with him, and he tries to win her over to his view that they must not procreate.  He fails to convince her, and finds himself unable to resist having sex with her.

The brief final scene I didn't quite understand.  I think a military unit, riding tanks and armed with rifles and bayonets, appears, and somehow this leads to the woman cutting off her breasts.  Or perhaps the main character is reflecting that even the sight of an armored squadron would not discourage the woman from wanting to have children, though if she had her breasts cut off then he would no longer desire her.

This is an acceptable story, even though it is written to be intentionally difficult to follow; there are lots of sentence fragments, I guess to convey the feeling of a world that has been smashed to bits, and get you into the mindset of people who have lived through such a catastrophe. 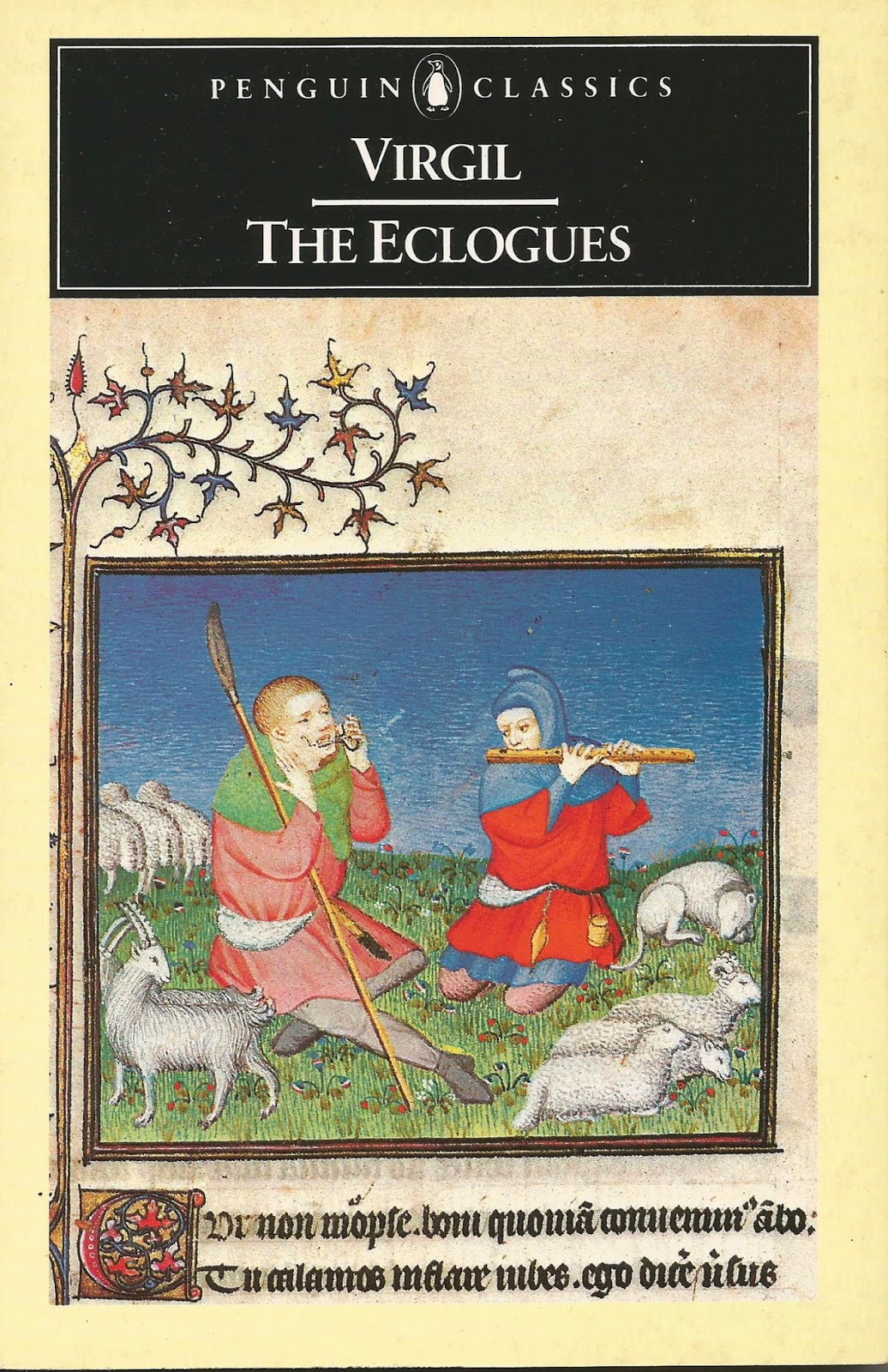 American-born Canadian poet Stanley won the Poetry Society of America's Shelly Memorial Award in 2006.  "To the Child..." is a two page poem, an adaptation of Virgil's Fourth Eclogue. All you classical scholars out there already know that Eclogue IV was widely interpreted in the Middle Ages as a sort of prediction of the birth of Jesus Christ.

Having been indifferently educated myself, I can't read Latin, but, in preparation for reading Stanley's piece in Quark/3, I took my copy of the Penguin Classics 1980 edition of the Eclogues off the shelf and read Guy Lee's translation of Eclogue IV.

Virgil's poem was written around 40 B. C. (or B. C. E., as we are saying nowadays) to express hope that a marriage alliance between the two successors of Julius Caesar, Mark Antony and Octavian (the future Emperor Augustus), would end the long period of instability and civil wars that had been wracking the Roman world.  Virgil is praising the prospective child of the union between Mark Antony and Octavian's sister: with his birth will come a new beginning which will see the end of fear and the "iron race" replaced by a "golden" one.

Stanley updates and Americanizes the poem.  The birth of the child will end the "machine age," and where Virgil mentions Achilles, Stanley mentions George Washington.  Virgil suggests that, with the child as his subject, his poetry will surpass that of Linus, Orpheus and Pan; Stanley says his verse will be the superior of Hart Crane's and Lorca's.

Maybe Stanley sees the assassination of JFK as analogous to the assassination of Caesar, and the 1960s, with such contentious events as the Civil Rights movement and race riots, Vietnam War protests and all the trouble around the 1968 Democratic Convention in Chicago, as analogous to the civil wars and other crises suffered by Romans during the Late Republic.  I can't tell if Stanley is referring to any specific person or event as ending the crisis period, the way Virgil does; a clue that isn't getting me very far on google is that this poem is dedicated to a Brian DeBeck.

"A Sexual Song" by Tom Veitch

Veitch has only three credits at isfdb, one of them a story he co-wrote about Greedo of Mos Eisley Cantina fame.  Veitch has written numerous comic books, including Star Wars comics.

This story is even more surreal and less coherent than Hill's "Brave Salt."  "A Sexual Song" begins "He dressed in moth skins torn from a beaver's diary..." and in the second paragraph we get, "Print culture seems to be dying this morning because the dead men who occupy those zones cannot provide nourishment to tribal electricians...."  The entire story is like this, incomprehensible nonsense, like the product of playing Mad Libs.  I guess the plot is about a sexual encounter in a post-nuclear war world in which everything is mutated and crazy.

"Twenty-Four Letters from Underneath the Earth" by Hilary Bailey

Bailey, when Quark/3 was published, was married to Michael Moorcock.  This is the first thing I've read by her; she seems to have been quite productive, though much of her work falls outside the SF genre.

After some kind of catastrophe the British populace resorts to living in government-built underground complexes.  Each complex is isolated from the others.  A female technician in one complex discovers a secret means of communicating with other complexes, and starts a surreptitious correspondence with an old acquaintance living in another complex.  The entire text consists of their letters, and through them we learn how human beings are reacting to being confined in the sterile and depressing complexes.  There are many women who insist on having children despite the discouragement of the authorities and a lack of resources.  Children and adolescents get into all kinds of mischief, creating extra work for the technicians and mechanics.  Family relationships collapse and there are pathetic attempts by lonely people to secure some kind of human comfort; the long distance love affair of our two main characters is one example.

A convincing and interesting milieu, actual characters and emotion, and a smooth writing style; Bailey brings to Quark/3 some things which have been in short supply.  After some of the pieces I've endured in Quark/3 it is certainly a relief to encounter a well-written story with some genuine human emotion and a clever SF premise that hearkens back to the tradition of the epistolary novel.  I am proclaiming the oasis that is "Twenty-Four Letters from Underneath the Earth" the best story in the anthology!

The isfdb indicates that "The Coded Sun Game," which is the longest story in Quark/3 (over 60 pages!), constitutes 50% of Brian Vickers's SF output.  Under ordinary circumstances I wouldn't devote the necessary time and energy to reading a 60 page story by a guy I never heard of, especially in an anthology which is full of weak stories, but I am on a mission, and I'm certainly not going to give up with the finish line in sight!


"The Coded Sun Game" is convoluted and difficult, and at times I found it hard to attend.  The narrative is a sort of stream of consciousness of a being who is delusional, suffering from "psychotic hallucinations" that are "compounded of past perceptual experiences."  The narrative is full of pop music references (the names of bands and singers, like Bob Dylan and the Beatles, and lines from songs like the Doors' "Light My Fire" and The Who's "See Me, Feel Me," pop up at random) and lists (of oil companies, of modern artists, of cities) and is periodically interrupted by science lectures (psychology, biology, solar astronomy) and medical reports.

Paul is a young man (perhaps an alien, perhaps a fallen deity) suffering from the aforementioned "psychotic withdrawal visions."  He is living with an English family near the ocean: Clive Noland, a doctor, his wife Barbra, an artist, and their sexy daughter Michelle.  Paul watches TV, walks on the beach, swims in the pool, has sex with Michelle.  His mental problems seem to be linked to solar radiation; a medical report says his symptoms reach their peak at midday, and the text is full of references to color, sunspots, and solar flares.

The story gets more confusing as it goes on.  In the second half more characters are introduced, and, like in a time travel story, Paul seems to be reliving scenes but as different characters, talking to and fighting with younger versions of himself from the first half of the story.

I've spent some time flipping through this story, rereading passages and trying to figure it out, but I don't really get it.  Still, I didn't find it offensively bad.

Fun fact: Until I read this story I wasn't familiar with the British slang term for transistor radio, "tranny" or "trannie."  You can imagine my initial puzzlement at the phrase, "Beatles strangled by a trannie."

So there we have it, Quark/3.  It wasn't an easy ride, but let's look at the bright side.  I read a pile of stories by writers totally new to me, and among them are Hilary Bailey and Josephine Saxton, whom I will definitely read again (also, it is notable that the Bailey and Saxton stories have never appeared in any other book, so I'd never have encountered them otherwise.)  Richard Hill's and James Sallis's stories are so crazy I am spurred to read their contributions to Again, Dangerous Visions.

Taken as a whole, the stories were less propagandistic and more experimental in style and form than I had expected.  Gordon Eklund's anti-war story and Kate Wilhelm's overpopulation story felt tired, but most of the writers really did try to do something strange and/or new.

Finally, let's rank the fiction to be found in Quark/3.  Hilary Bailey comes in first, with Lafferty and Delany close behind, and Saxton a distant fourth.  Then we have a pack of OK tales, followed by a mass of weak stories, and then three certifiable disasters.