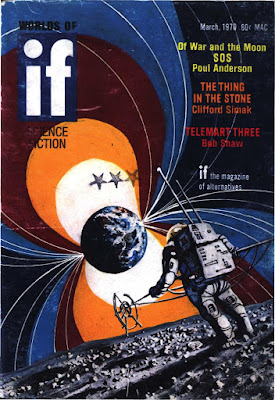 While working on my blog posts about Bob Shaw's 1973 collection of short stories Tomorrow Lies in Ambush, I flipped through the March 1970 issue of If and became intrigued by a story by Clifford Simak, "The Thing in the Stone," because it was accompanied by a moody illustration of a bipedal dinosaur.  Like everybody, I love dinosaurs.  So today we are looking at this story and two others in that issue of If, which also features debate about race and IQ in the letters column and an ad in which Tony Curtis offers you a button reading "IQ" (which stands for "I Quit") if you quit smoking cigarettes.

"The Thing in the Stone" by Clifford Simak

"The Thing in the Stone" was apparently a hit with readers, coming in second to Fritz Leiber's Fafhrd and the Grey Mouser story "Ill Met in Lankhmar" in the voting for the 1971 Hugo for Best Novella.  It was included in Wollheim and Carr's World's Best Science Fiction 1971 and has appeared in many anthologies and collections and been translated into six foreign languages.

This is one of those pastoral stories about country folk in the Wisconsin hulls who sit on porches and look at the hills and gossip about foxes and chickens and moonshining.  Wallace Daniels has lived in the area only three years as the story begins.  We learn that he likes climbing the hills and looking for fossils, but he sees more than fossils on these daily outings--he sees prehistoric plants and animals in the flesh!  In a flashback we learn that he developed the ability to see the past after a car accident (which wiped out his family) injured his head and "rearranged" something in his brain.  As he hikes, this ability will kick in and shut down at random intervals, enabling him to walk the countryside some apparently randomly determined time in the distant past, but not really interact with it; photographs taken in the past do not develop, he can't bring samples back to the 20th-century, and the dinosaurs and other prehistoric fauna can't see or smell him.

That car accident gave Daniels still more powers--he can listen in on the telepathic communications of aliens!  In a cave in a cliff face, accessible by climbing a tree, Daniels senses an alien intelligence embedded deep inside the rock which he suspects to be the crew of a space ship which crashed tens or hundreds of millions of years ago and was buried in the mud that this stone then was.  When an envious neighbor traps Daniels in the cave our hero tries to communicate with the alien and succeeds in holding a conversation with making a friend of not the actual space traveller trapped in the stone but a lesser creature loyal to it, a creature of pure energy that plays a role in alien society similar to that of a dog in human society.  This space hound has an intelligence similar to that of a human, but is a "lowly" creature in the  hierarchy of super smart alien society--it has been waiting here for the alien to somehow achieve freedom for millions of years. 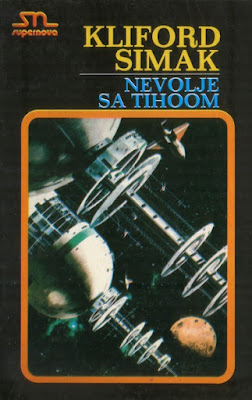 Daniels escapes the cave when his power kicks in and he finds himself at a time before the cliff and cave had formed (luckily, his power always materializes him at ground level, not up in the air even if the ancient landscape was at a lower elevation than it will be in the 1900s.)  He is on the shore of an ancient ocean, at the time of the dawn of land-based life, there are no trees or grass, just slime and little amphibious creatures Simak doesn't describe.  An alien space ship appears, and drops a sphere into the shallows of the prehistoric sea; Daniels can "hear" the alien authorities bidding a farewell to an alien criminal who is being left imprisoned on the primitive Earth ("beyond the farthest track of galactic intercourse") for unspeakably horrible crimes--this is the alien entombed alive in the Wisconsin stone, beloved of the space hound despite its evil.

The big theme of this story seems to be the unity of all life, and the responsibility of living things for each other, even across borders of species and regardless of considerations of justice and worthiness.  Daniels feels a sense of duty regarding his cows and hogs, who rely on him for food and shelter, and when he is in the cave, in danger of dying of cold or thirst, he is thinking about the poor trapped alien and his own poor unfed livestock as much as he is about his own skin.  (The space hound notes the similarity of this devotion to his own devotion to the trapped alien.)  Daniels, who has no interest in hunting and doesn't own a gun, refuses to try to kill the fox who steals his chickens, and doesn't report to the cops the life-threatening trick his jerk of a neighbor played on him.  Like the aliens who don't execute a perpetrator of unfathomable atrocities and the space dog who loves his master despite his crimes, Daniels forgives those who trespass against him.

This story is not bad, though the conversations and descriptions feel a little long-winded at times and of course the powers Daniels has are pretty nonsensical.  "The Thing in the Stone" is a good example of the "pastoralism" for which Simak is famous, and it lacks the sort of bitter complaints we sometimes get from Simak about city life and human shortcomings that can get on my nerves. 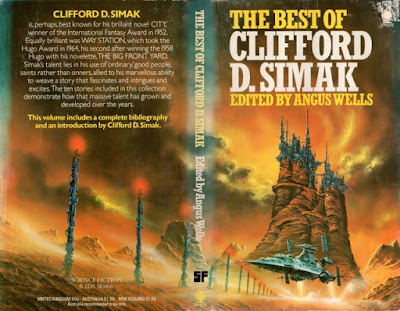 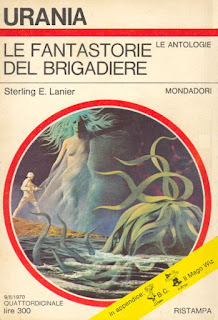 "In the Silent World" by Ed Bryant

"In the Silent World" doesn't appear to have been a hit; besides If, it has only ever appeared as a bonus story in an Italian collection of Sterling Lanier stories.

Julie is a nineteen-year old college girl from a small town in Georgia and a telepath who can read minds.  She is lonely because she has never met another telepath.  One day during a lecture on Baudelaire she receives a mental message--another telepath, a young man named Ted, has found her!  After class she walks across campus to meet him, already thinking of what their married life will be like--who else could she fall in love with and marry besides the only other telepath in the world?  Especially since with her mind reading power she knows how selfish and horny all other men are!  But when she meets Ted she sees an obstacle to her new found happiness--Ted is black!

This is more of an idea than a story--it doesn't have anything to say about racism or interracial relationships or the black experience in America or anything like that, it just points out that people are racist as a twist ending--but it is acceptable filler, I guess.

The galactic government is almost ready to OK colonization of an as yet unnamed planet, but they need a specimen of all the planet's land animals first, and one beast has so far eluded captured--the greycat!  Rysling is hired to capture one of these elusive beasts, and after landing on the planet sends out his remote controlled robot cage to snag the feline.  (Remember when J. Jonah Jameson remotly guided a robot designed to catch Spider-Man?  That was really something, wasn't it?)

The cat, it turns out, has psychic powers and somehow part of its soul enters Rysling's body and part of Rysling's soul enters the cat's body.  Not realizing the limitations of a human body, the cat psyche in Rysling's body tries to jump off a cliff, breaking the human's neck.  Meanwhile, the surviving portion of Rysling's psyche enjoys being in a cat body and quickly forgets its former human life altogether.

"Traps" would later be translated into Italian and French (it appeared in the French edition of Galaxy) and was included in a 21st-century collection of Zebrowski and Dann collaborations titled Decimated. 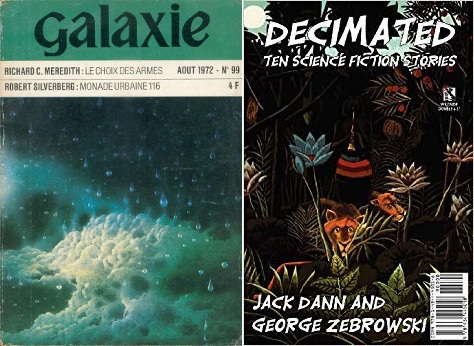 These stories are a little underwhelming, but not actually bad.  (I'd have read the Poul Anderson story in this issue of If but the Poul Anderson estate requested that it be excluded from the file at the internet archive.)

In our next episode, stories from SF magazines published in 1971.
Posted by MPorcius at 9:02 PM