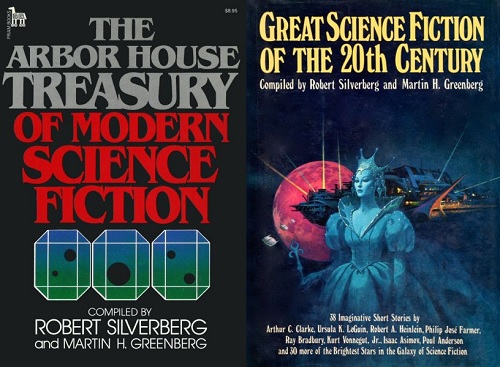 Here at MPorcius Fiction Log we are flipping through Great Science Fiction of the Twentieth Century, a glamorous 1987 reskin of 1980's The Arbor House Treasury of Modern Science Fiction.  In our last episode we looked at the stories penned by Theodore Sturgeon, Robert Heinlein, and Ray Bradbury that editors Robert Silverberg and Martin H. Greenberg selected for the volume; today let's read their picks from the bodies of work of Avram Davidson, Algis Budrys, and Damon Knight, three writers about whom I've scribbled a bit in the last few months. 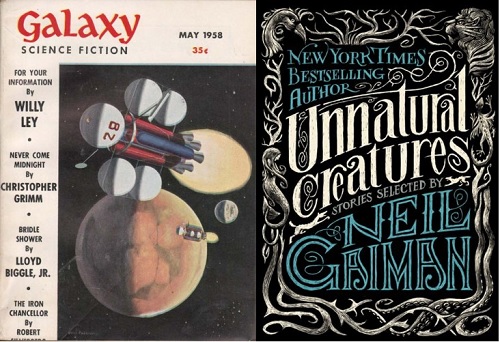 This story won a Hugo after first appearing in Galaxy and has been anthologized many times, including by Neil Gaiman.  (I hear Neil Gaiman is one of the favorites of the kids these days.)

I guess "Or All the Seas With Oysters" might qualify as a joke story, but it is more sophisticated, at least in style, than the broad and absurdist joke stories I am always complaining about here at the blog.  Two men run a bike shop.  One, Oscar, is a hearty chap who seduces a lot of women and whose attitude is to take life as it comes, to make the best of the situations you find.  His partner is Ferd, a shy nervous type who reads books and worries over the things he reads about in the newspaper.

To make a long story short, over the course of Davidson's tale, clever and sensitive Ferd realizes that some sort of weird creature, one that looks like a safety pin in its larval form, a clothes hanger in an intermediate form, and a bicycle in its mature form, has infiltrated human society--Davidson's gimmick here is based on commonplace observations that you can never find a safety pin when you need one and that one's closet is always filled with superfluous coat hangers.  The story's punchline is the contrast between how Ferd and Oscar respond to this astonishing discovery and what fates their reactions lead them to.

One of the sophisticated aspects of the story is how Davidson doesn't make it too obvious which of the two men we should identify with, and whether we should view the story as a terrible tragedy or something of a goof.  Similarly, there is a vague reference to Ferd suffering anxiety over reading about communists in the newspaper, and Davidson doesn't let on whether Ferd is worried about the threat posed by the communists who are murdering and enslaving millions of people in Eastern Europe and China, or sympathizing with leftist Hollywood screenwriters whose careers are suffering some obstacles due to their beliefs.  This sort of ambiguity allows the reader to comfortably assume Davidson sees the world as he sees it, or forces the more thoughtful reader to think twice, which adds value to the story.

Despite my aversion to absurd joke stories, I enjoyed and am recommending this one.  Over time Davidson is growing on me. 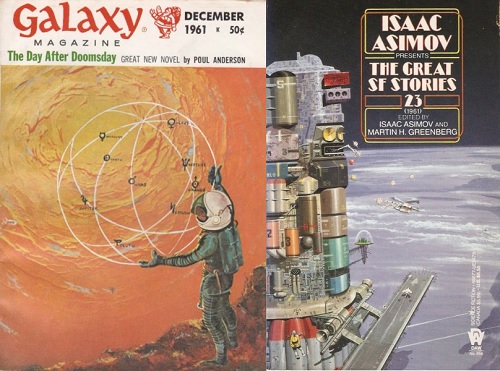 As has Davdison, Budrys, about whom I was skeptical when this blog first lurched on to the interwebs from the recesses of my fevered brain, has been growing on me.  Like "Or All the Seas With Oysters," "Wall of Crystal, Eye of Night" first appeared in Galaxy.  It would go on to be included in a number of anthologies, including Isaac Asimov and Greenberg's The Great SF Stories #23, which also includes a story we at MPorcius Fiction Log liked, R. A. Lafferty's "Rainbird," and two stories we loved, Jack Vance's "Moon Moth" and Cordwainer Smith's "A Planet Named Shayol."

It is the future--the 21st century!  Rufus Sollenar is an optical engineer and a successful businessman, who surveys beautiful Manhattan from his office atop a skyscraper--he can even see spaceships taking off and landing out at the Long Island spaceport.  He is on top of the world, his firm having just started manufacturing a new kind of TV, EmpaVid, that interacts directly with the viewer's emotions via subliminal messages and a biofeedback mechanism.  But word comes of trouble--a rival firm, that of Cortwright Burr, has been working with Martian engineers--the native Martians are a dying race, but they have all kinds of mysterious technology.  Presumably Burr has returned to Earth with an entertainment system superior to EmpaVid, putting Sollenar's firm, and all those who have invested in it, in terrible financial risk.

Utilizing some of the many gadgets and devices featured in this story, Sollenar launches a one-man commando raid on Burr's office and tries to assassinate him and steal his Martian technology.  But it seems that Burr has been given Martian immortality treatments and is almost indestructible!  A shattered, scarred and half-disguised Burr begins to haunt Sollenar at his office, at a big party, on the commercial space ship Sollenar takes to Mars to meet the Martian engineers himself.  On Mars, Sollenar and we readers realize that there are no Martian immortality treatments, that Sollenar is not being pursued by an immortal Burr revenant, but is hallucinating such persecution because Burr, using the hypnotic entertainment device he acquired from the Martian engineers, laid a trap for Sollenar, whom he expected to kill him.

Sollenar is, however, in fact being pursued by somebody, an agent representing an association of all the companies of the broadcast industry--this association enforces agreements and looks out for the broadcast industry's collective interests, and has decided that Sollenar, who is acting like a nut and thus putting all their investments in EmpaVid at risk, should be killed.  As the story ends Sollenar lays a trap for his killer similar to that which Burr laid for him.

This is a solid SF story full of futuristic devices and processes and mysterious aliens; there is also, implicitly, the criticism of TV and big business we see in so much SF.  Budrys is a good writer and the images in New York and on Mars and the pacing throughout are quite satisfactory.  I have to admit that I was a little disappointed when I realized that Burr was not really a living-dead avenger chasing his assassin all over Manhattan's towers and the red planet's wastes, that it was all an illusion--I guess I have a childish fascination with immortality, revenge narratives and chases, as well as limited patience with "it was all a dream" stories.  But Budrys makes it work, and I can recommend "Wall of Crystal, Eye of Night."

(I'm glad I can give the thumbs up to two stories from Galaxy in this blog post, because I don't want people to think my lukewarm reaction to a bunch of Galaxy stories a few blog posts ago means I am some kind of irrational Galaxy-hater.) 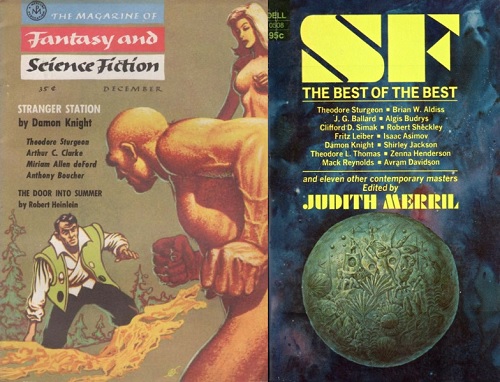 "Stranger Station" got top billing on the cover of the issue of F&SF with the third installment of the serialized version of Robert Heinlein's Door Into Summer and a striking cover by Kelly Freas.  Like the other stories we have been talking about, it has been widely anthologized, and was selected for republication by, among others, respected anthologist Judith Merril and British men of letters Kingsley Amis and Robert Conquest.

This is a traditional sort of SF story about space stations, a talking computer that may very well have developed a personality, psychic interaction between human and alien, and trying to figure out alien motives.

A century ago Earth astronauts encountered on Titan extrasolar aliens, colossal arthropod-like creatures with many limbs whose proximity caused an intense psychological pressure to the humans.  The aliens apparently also suffer from psychic contact with humans, and their suffering causes them to exude a fluid; this fluid, when taken by humans, greatly extends the human lifespan.

By the time of our story the process of trading with these aliens has been regularized, and human civilization is reliant on the alien longevity goop.  A space station orbits the Earth, and every twenty years a human spends a few months in one living compartment of the station, while an alien does the same in a huge adjacent compartment.  The mental stress on the human of being so close to the alien for such a long time is tremendous and tends to drive the human volunteer insane, though the details of that insanity, and what the aliens actually look like, is kept a secret from the common people.  The plot of "Stranger Station" covers one such period of interment at the station with the alien, that of Paul Wesson--we follow Wesson's wavering mental health, his relationship with the computer that runs the station and is meant to keep him company, and his efforts to figure out the aliens' motives for giving us this invaluable secretion for free.

There are many SF stories that contrast belligerent humanity with pacific aliens, and "Stranger Station" is one of them.  Wesson comes to believe that the elephantine bug-like aliens are not violent, and would thus be at the mercy of the aggressive human race when, in one hundred years or whatever, we invent an interstellar drive.  Contact with an alien mind alters a human's mind, making it more like that of the alien--for example, Wesson loses the ability to read and speak English during his exposure to the alien brainwaves--and Wesson theorizes that he is being manipulated into becoming a member of "the vanguard--the conquered men, the ones who would get along with their strange brothers, out among the alien stars."  The E.T.s are preemptively colonizing our psyches before we can colonize their planets!

This alien plan of altering our brains so we will be like them is characterized (as you might guess from the use of the word "brother" in the quote above) as "conquering by love," but in this case love is no match for good old hate!  Wesson's will, his ability to hate the hideous alien whose body "reminded him of all the loathsome, crawling, creeping things the Earth was full of" overcomes the alien efforts to adapt his brain and make it accept brotherhood with those freaks.  The alien dies, and in its death throes wrecks the space station, which Wesson presumes will mean an end to the goop handout, triggering human resentment and, when the human race does achieve interstellar travel, a campaign of revenge on the peaceful aliens.

A concurrent and interconnected subplot is how the computer may have developed free will and if so may be falling in love with Wesson.  The computer seems to break the rules a bit at Wesson's request, letting Wesson see a forbidden video feed of the repulsive oozing space monster that wants to be his brother, and it seems possible that it is this rule breaking that gives Wesson the ability to resist alien influence and set off the chain of events that will end the goop giveaway and set us on the road to interstellar war with these peaceful aliens.  Has love of computer for human tragically ruined any hope of love between alien and human...or rescued us from unnatural bondage to disgusting alien weirdos, from a betrayal of our essential nature?

(While I am holding on to the possibility that Wesson and his computer girlfriend should be seen as heroes for preserving human independence and free will from the machinations of giant alien hypno-bugs, Silverberg and Greenberg here in their intro to "Stranger Station" suggest Wesson's resistance is irrational racism.)

A good story.  I have been down on many of Knight's stories over the years, but I enjoyed "Stranger Station" and definitely recommend it.